As the communist-ruled state of Kerala reported more than 22,000 fresh Covid-19 cases for the third day running on Thursday (July 29), taking India’s daily case count to nearly 45,000, the highest in 22 days, the entire left-liberal cabal has swung into action to protect its overlords in the Pinarayi Vijayan government.

Rajdeep Sardesai, the trusted sepoy of the Left government, finally broke the monotony of his silence on the issue and relied on the Sero-prevalence data to prove that Kerala was not under the third wave. The ‘journalist’ even interviewed Veena George, Minister of Health and Family Welfare, and rather cunningly steered her through the chat without asking any tough questions.

Has something gone wrong with Kerala strategy for fighting COVID or do figures hide ‘real’ story of successful containment? Listen in to Kerala health minister @VeenaGeorge03 and then experts @MenonBioPhysics and doctors.. https://t.co/UJ6xRdVExh @IndiaToday News with knowledge!

Meanwhile, Indian Express carried a three-column front-page story yesterday (July 29) with the headline “Only 44% of Kerala’s population is infected, 79% in MP: Serosurvey”.

Now let’s say Indian Express believes lesser people are infected in Kerala because people are conscientious on SoPs: masks, distances, hygiene. Then what do we do with the latest report that Kerala has more districts of concern, with over 10% rate than any other state? If Pinarayi Vijayan’s government is good with testing, and people are SoP friendly, why are the cases rising?

It also has the lowest centromere, pyrimidine, Cytokinesis, Eukaryote, Oligosaccharide, Tegmentum, Angiostimulatory and dicotyledon values but Covid cases are rising and that’s what matters. You have failed sir. https://t.co/jAgFbDJ9WB

Ravish Kumar, the NDTV journalist, infamous for sending ‘hazaar laanatein’ to the bullet that killed Danish Siddiqui and not the Taliban, once again drew a similar analogy and unloaded the entire blame of Kerala’s mismanagement on the Centre and the IT Cell. Yes, few internet trolls botched up the response of the Vijayan government against the pandemic, according to Ravish.

Without uttering a single line on the current worrisome situation of the state, Kumar quickly cross-questioned by asking why this IT-Cell was in hiding during the second wave of the pandemic.

“No government must be shielded on their failure of tackling corona. Not even the Kerala government. Modi government’s failure in the second wave is evident. We cannot discount that.” Ravish signed off saying in his long mumble-jumble post. 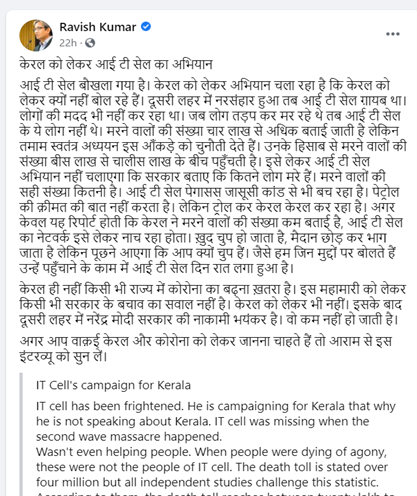 In perfect woke slang terms, the ‘strawman’ was strong with Ravish’s statements as he appeared to be sending ‘hazaar laanatein’ to the IT Cell, not the state government that was mismanaging the situation.

The Wire similarly interviewed Bhramar Mukherjee, an epidemiologist at the University of Michigan and with textbook accuracy, like the rest of the cabal, put the blame on centre. Citing dubious data models, the professor claimed approximately 2.6 million cases could have been averted by April 15 and nearly 12.9 million cases by May 15 if precautionary measures were taken.

If making such vague statements amounts to being a domain expert then every single netizen on Twitter is an ivy-league graduate in epidemiology. Of course, if Kerala had taken the precautions, the situation would not have spiralled out of control.

Despite the increase in cases in Kerala and the Pinarayi Vijayan-led government’s inability to manage the pandemic, they still caved in to the pressure of the Muslim community to lift the lockdown restrictions for three days to celebrate Bakrid or Eid-ul-Adha. Now, the government is imposing an ornamental ‘two-day’ strict lockdown to keep a check on the burgeoning caseload.

Read More: Third wave will come. Kerala and Maharashtra will make it a possibility

The liberals often use the excuse of Kerala testing more and thus the cases are being reported on a large scale. However, the argument falls flat when one does a comparative study. Uttar Pradesh is the state that has set new records in Testing on almost a daily basis throughout the last 6-7 months. The state government under Yogi has been conducting more than 4 lakh tests per day and yet, the state has recorded less than 10 per cent of what Kerala has reported despite having a population of 24 crores.

The intellectual cheerleaders of the Kerala model have fallen completely silent and the Lutyens media that went gaga over the so-called model is nowhere to be seen. The Chief Minister and his former star Health Minister Shailja Teacher, who even received an award from the UN for tackling the coronavirus cases but was later dropped like a sack of potatoes from the cabinet have completely botched up the response.

The first and second waves started from Kerala and Maharashtra only and later engulfed the entire country. However, if the numbers are anything to go by, it appears that Kerala will be responsible if the third wave comes crashing.

‘When Taliban found out that Danish was in a mosque, they went for him and executed him in cold blood,’ reports reveal