by Mahima Kalra
in Opinions
2

In Punjab, the BJP is going for a kill. With assembly elections slated for early next year in the border state, the Bharatiya Janata Party is trying to weather the storm of anger it faces in Punjab owing to the three farm laws. The Shiromani Akali Dal is no longer an ally, and the BJP will therefore be contesting most seats on its own. Across the state, every seat will have at least a solid 4-way fight. It would be interesting to see how the Congress, Akali Dal/BSP and Aam Aadmi Party eat into each other’s votes.

The BJP, meanwhile, is trying to work out its own new equation in Punjab. While it hopes to win over a chunk of the Sikh vote of the state by early next year, it is also relying on Hindu vote consolidation and a handsome winning streak among the Dalit voters of the state. For wooing the Sikh vote, the BJP on Wednesday welcomed into its fold six Sikh faces a day after the party brass took stock of the political situation in Punjab. The new entrants include the likes of former vice-chancellor of Guru Kashi University Jaswinder Singh Dhillon, Col (retd) Jaibans Singh, advocate Harinder Singh Kahlon, Jagmohan Singh Saini and Nirmal Singh and Kuldeep Singh Kahlon, a former president of the All-India Sikh Students Federation (AISSF). 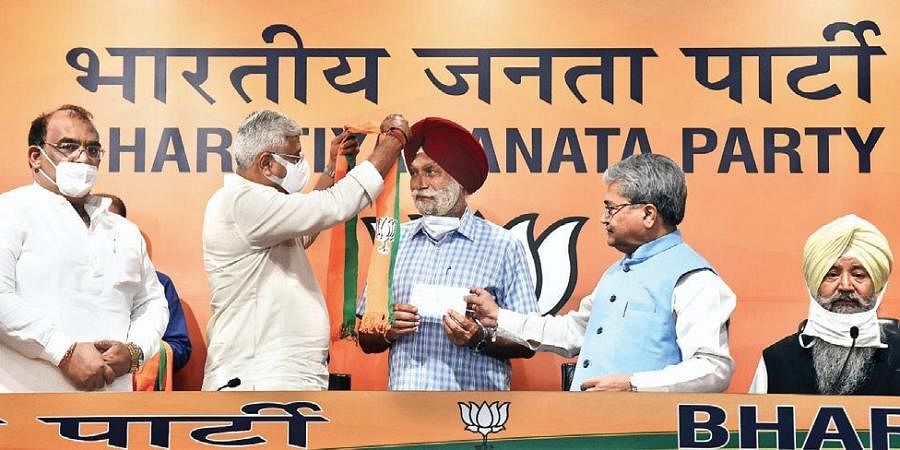 Although the new entrants are not mass leaders, the saffron party feels they will help it a great deal in fighting the perception battle in Punjab. The ruling Congress, meanwhile, is fighting intense factionalism and there is growing discontent in the party’s state unit regarding the leadership of Captain Amarinder Singh. Navjot Singh Sidhu has been projecting chief ministerial ambitions, while the Congress battles charges of corruption, misgovernance and non-performance on its 2017 promises like a drug-free Punjab.

In a statement that shows the Congress party’s typical feudal and casteist mindset, party MP Ravneet Singh Bittu said “pious seats” like Anandpur Sahib and Chamkaur Sahib should not be given to the Bahujan Samaj Party for Punjab elections 2022. This has led to massive protests against Bittu, especially in the Dalit dominated Doaba region and its centre, Jalandhar. So, the Congress is on a self-destruct mode in Punjab – and requires absolutely no outer assistance for blowing up its own fortunes in the state.

Like the Akali Dal, the Congress too is desperate for Dalit votes. But with leaders like Bittu coming forward and making casteist remarks, the Congress stares at the prospect of facing a rout. The BJP will try to consolidate the Hindu votes in the state and will be successful to an extent in doing so. Therefore – Congress will lose two foundational vote banks in Punjab – putting it on the backfoot.

The Akali Dal meanwhile, has allied with the BSP – with an aim to garner a significant chunk of the Dalit votes. However, the BSP might not be very successful in attracting a significant Dalit vote share for itself if all parties like the Congress, BJP and AAP start fighting for the SC vote in the state. Therefore, SAD’s alliance with BSP does not seem to be well placed to produce the needed results for Sukhbir Singh Badal to become chief minister.

Speaking of the Akali Dal – it does not charm the Sikhs of the state any longer. The culpability of the Badals brazenly intruding into Sikh religious institutions has not been given a miss by anyone. Add to that, the 2015 Kotkapura shootings after the Bargadi sacrilege still haunt the Akalis. Most recently, over 300 saroops of Sri Guru Granth Sahib had gone missing in Punjab – for which too the Akali Dal and SGPC have come under severe attack from Sikhs.

Read More: ‘Only 5-6 hours of electricity in Amritsar,’ Punjab farmers face a dire situation, but farm unions look the other way

Meanwhile, the faultlines between the Hindus and Sikhs of Punjab have come out in the open due to the fake farmers’ protest. The Khatris comprise 35% of the Hindu population and if they vote for BJP, it will make a huge difference for the party in the state. Polarisation is alive and kicking in Punjab, and the BJP might just benefit out of the same.

The BJP – despite the perception that it is a lost cause in Punjab, might end up surprising everyone with its performance early next year.