Rahul and Sidhu vs Amarinder: Why Congress will be fighting against Congress in the 2022 Punjab election

However, it seems that the Congress party would be fighting against the Congress party in the 2022 assembly election with Navjot Singh Sidhu led faction – which has the support of Rahul Gandhi – on one side and Amarinder Singh, who remains very popular among voters, on the other.

As per an article by The Indian Express, Sidhu is waging a fight against Amarinder Singh with few other influential leaders like Pradesh Congress Committee chief Partap Singh Bajwa and Congress Rajya Sabha MP Shamsher Singh Dullo on his side.

According to the report, “Sidhu had a meeting with at least two ministers — Cooperation and Jails Minister Sukhjinder Randhawa and Technical Education, Tourism and Cultural Affairs Minister Charanjit Channi. In attendance were also said to be some MLAs – Partap Singh Bajwa’s brother Fateh Jung Singh Bajwa, along with Kushaldeep Singh Dhillon, Balwinder Laddi and Barindermeet Singh Pahra.” 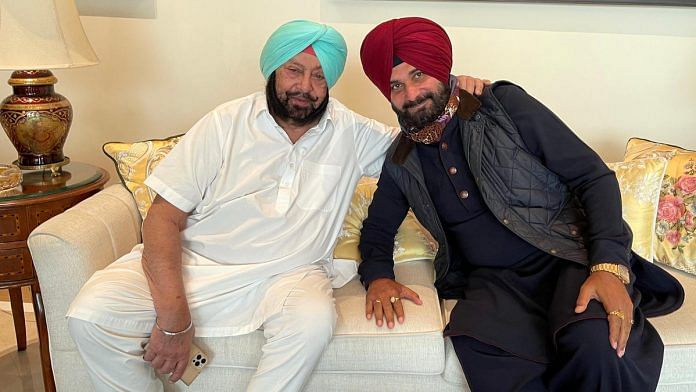 A few days ago, after Sidhu made statements against Amarinder Singh in public, the CM of Punjab made his intentions clear that if Sidhu joins any other party to contest election against him — he will certainly lose his deposit at the seat.

“I don’t know where he will go or which party he will join. Akali Dal is upset with him and BJP won’t accept him… so most likely AAP. If he wants to contest against me from Patiala he will meet the same fate as General JJ Singh, who lost his security deposits,” CM Amarinder Singh said in an interview to a private channel.

In the last 20 days, Sidhu has addressed two press conferences in Patiala – the stronghold of Amarinder Singh. Sidhu has simultaneously leveraged the power of social media and has been regularly uploading videos on his Facebook, Twitter and YouTube accounts where he lambasts the Punjab government for not bringing the guilty to book in Bargari sacrilege. Most of the other leaders who are opposed to Amarinder Singh have also made the sacrilege case rallying point because it has a religious undertone that can be used to mobilize Sikhs against the CM of Punjab.

Reported extensively by TFI, Sidhu has been extremely vocal against the Punjab government’s functioning and especially Captain Amarinder Singh even when he was a cabinet-level minister — although he had to pay the price for it after he was ejected from the cabinet by the two time CM.

Read More: ‘Contest against me from any party ticket and I’ll show you who the boss is,’ Amarinder Singh humiliates Navjot Singh Sidhu

Amarinder had divested Sidhu of the Local Government and Tourism and Cultural Affairs Departments and allotted him the power and new and renewable energy portfolio. However, Sidhu had refused to assume the charge and resigned.

If the current crisis between the two camps is not resolved, the Congress party would be fighting the 2022 assembly election against the Congress party and amid this factionalism, the opposition parties like AAP and Akali Dal, which are very weak at the moment and do not have a leader who can take on Amarinder Singh, might eventually win. And this will be a huge loss for the Congress party which is already receding from the map of India under the incompetent leadership of Rahul Gandhi.