With $81 billion received in the last one year, India is making history in FDI numbers, and everyone should be celebrating it

The country received its highest ever FDI of 81.72 billion dollars in FY 21. The country must celebrate the fact that despite the pandemic, India has emerged as the most trusted destination for foreign investors. The state of Gujarat received the highest foreign investment with around 1.77 lakh crore rupees which is around 32 per cent of the total foreign investment. Gujarat was closely followed by Maharashtra – which used to be a favourite destination for investment earlier – with 1.53 lakh crore rupees or 28 per cent of the total investment. 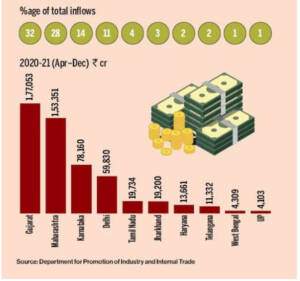 The states like Delhi, Haryana, Uttar Pradesh, Jharkhand are trying to fill the gap but the Western states and Karanataka maintain the lead with first, second, and third rank. The services sector coupled with computer software and hardware accounted for around 30 per cent of the total FDI. These investments would help India to maintain the leadership in these sectors and increase the gap with challengers.

The political stability in the country and a reformist government coupled with demographic dividend are the right mixtures for the economic growth of any country and India has all these ingredients at this time.

Investors around the world are convinced that the long-term story of India’s growth is going to be positive, in spite of short-term setbacks like Coronavirus. “Economic growth will be tempered by the second wave in 2021, but growth will be strong this year and the long-term outlook is quite positive,” said Tom Masi and Nuno Fernandes, co-portfolio managers at GW&K Investment Management. “Short-term investors will be compelled to step aside, but long-term oriented investors understand the opportunity.”

The policy analysts, economists and corporate houses around the globe have given positive reviews about the economic policies of the Modi government. Some of the most important economic reforms which were waiting in the policy corridors since the last few decades like- farm laws, labour laws, GST, Insolvency law, rationalisation of corporate and income tax, were implemented by the Modi government in the last few years.

The GST was waiting for implementation in the policy corridors for almost three decades, as the previous governments could not bring all the stakeholders together to implement the uniform indirect taxation. But the Modi government has been able to build consensus for the implementation of GST in one of the most complex markets around the world. GST has helped increase the number of indirect as well as direct taxpayers. Top economists have predicted that GST will improve the GDP growth of the country by 1-2 per cent.

Similarly, the IBC is solving the bad loans crisis of the Indian economy, which has slowed down the credit for the past decade. Given the structural reforms in the Indian economy, the long-term prospects look better for India when compared to the rest of the world which is dealing with acute slowdown and hopelessness amid the pandemic.

The market in India is flooded with liquidity and once the danger of Coronavirus ends, there will be a huge surge in FDI as well as consumer spending. Many sectors like Information technology, financial services, and agriculture are already performing better than in the pre-pandemic years, thanks to economic reforms and fundamental changes in the macroeconomy brought due to Coronavirus. The other sectors too will pick up once the threat of the virus is over, and the economy will grow like never before.

‘Sorry, it was a WhatsApp forward,’ Harbhajan Singh apologises after dropping pro-Bhindranwale post