The Coronation of Kapilendra Deva Routray who established the Suryavamsa Routray Gajapati Dynasty in Kalinga.

by Saswat Routroy
in History
1

The tiger took a step backward. Its eyes glazed on its prey. A growl echoed from its mouth, its tail was swinging like a viper ready to make a strike. Its prey, a 12 year old human kid seemed to stand no chance against the brute animal. The tiger finally made its leap.

The Ganga emperor Bhanudeva IV saw the mightiest act of courage in his life. The 12 year old kid single-handedly killed the tiger after a swift battle even before any help could reach him out. Bhanudeva IV decided to gather more information about the kid.

It turned out that the kid, born to father Jageswara Routa and mother Bellama, was no ordinary boy. The third son of a man from a family which claimed lineage from the Suryavamsa dynasty, the kid was already a famous legend in the town. One day while he was resting under a tree, a handful of people noticed that a Naga (king cobra) was sitting besides his head as if covering the sunlight. Whether it was true or not nobody knows, but when the words spread out like rumors, people considered it a prophecy foretelling that the boy is destined to be a mighty king one day. 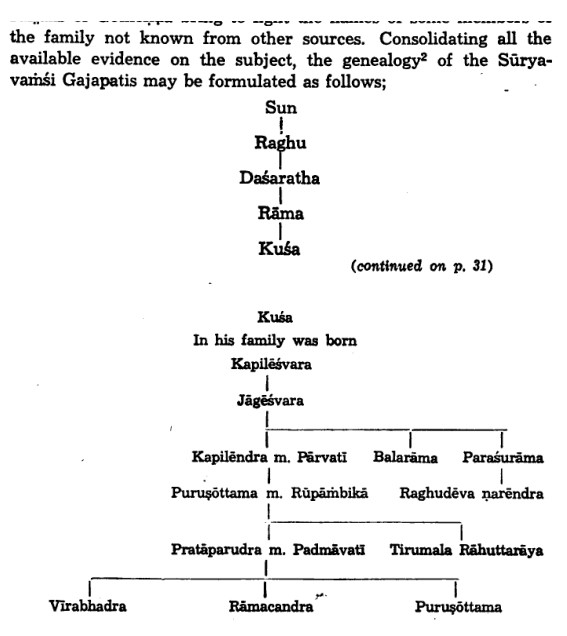 Childless Bhanudeva IV had become fond of the kid. After gaining military training followed by a series of turnout of events, the kid who grew up to be his faithful and loyal general. Madala Panji, the temple chronicles of Puri Jagannath Temple kept record of this historical event which was about to change the history of Kalinga.

Over the years, the kingdom of Kalinga was engaged in various feuds with its hostile neighbors like the Reddys of Rajamundry in South, the Sultan of Bengal in North, the distant Malwas etc. With the falling health of Bhanudeva IV, the royal administration was slowly degrading day by day.

The last emperor of the Gangas, king Bhanudeva IV met his downfall during a protracted struggle against the Reddys of Rajahmundry in distant south by that time. As the news spread, various chieftains and vassal kings of Kalinga declared themselves independent since Bhanudeva IV left no legal heir. Hostile neighbors tried to capitalize during this time of confusion and declared collective war against Kalinga.

The prophecies became true. Astonishing everyone who posed a potential threat to Kalinga, the loyal general of Bhanudeva IV ascended to the throne himself and took the reigns under his strong and worthy hands. On the day of 2 kākara śukḷa 4 aṅka 2 which coincides with June 29th of Gregorian calendar, the hasty coronation of Kapilendra Deva Routray took place under the priests and his loyal subjects at Kritivasa Kataka- the modern day Bhubaneswar.

With his coronation, Kapilendra Deva established the Suryavamsa Gajapati dynasty/Routray Gajapati dynasty which played a pivotal role in medieval history of India. Soon he sorted out the various serious problems of Kalinga-

At that critical juncture, Kapilendra Deva Routray took immediate steps and subdued the rebel chiefs like the Matsyas of Oddadi, the Salivamsi chiefs of Nandapura, the Vishnuvardhana Chakravartins of Panchadharala and the Gangas of Khimindi. His Lingaraj temple inscription thus reveals: “all kings of my kingdom of Odisha should work for the good of the paramount sovereign and should keep to virtuous ways and not remain in bad ways. If they act badly towards their sovereign, they will be expelled from the kingdom and all their property would be confiscated.” This order definitely directed the defiant chiefs to acknowledge the suzerainty of Kapilendra Deva.

Regarding the hostile neighbors, Kapilendra Deva made a remarkable feat in sending a strong message to them:-

The inscription at Kurumabedha Fort (given below) mentions him as ‘Gaudeswara’During the decisive battle of Devarkonda, the Bahamanis were about to ravage the Devarkonda fort when Kalinga army under the leadership of Kapilendra Deva’s eldest son Hamvira Mahapatra came to Velamas’ aid and defeated the Bahamanis. The Bahamani forces were literally crushed from two sides- the Velama Chiefs attacked from the fort at front while the Gajapati army crushed Bahamanis from behind. With the victory of Devarakonda in 1458 AD., Kapilendra Deva Routray took the title of Kalabargeswara.

The battle wasn’t over though. The Kalinga army marched towards Warangal. The Velamas went towards Rajachal. Kumara Hamvira led his troops to attack the Warangal fort which was under the command of polymath Mahmud Gawan, who would later become the prime minister of Mahmud Shah III Bahamani. The Warangal fort soon fell to the Gajapati army.

The Velamas became a strong ally and vassal of Kapilendra Deva Routray since then.According to folklores, Kapilendra Deva’s Telangana conquest was one of the few wars in which Odia forces had used gunpowder. Kautuka Chintamani is a 16th century text composed by Gajapati Prataprudra Deva, grandson of Kapilendra Deva. Kautuka Chintamani explains the recipe of gunpowder- it has mentions of salt petre, fuse and other ingredients of fireworks. It is basically a manual regarding the usage of gunpowder and fireworks which Prataprudra Deva composed based on the practices by Odia forces.During this time, Mallikarjuna transferred Saluva Narasimha, the ruler of Chandragiri kingdom to the central division of his empire with Vinukonda as its capital. This made Chandragiri kingdom weak. Pasupati Tamma Bhupala, a lieutenant of Kapilendra Deva, attacked the fort of Chandragiri and occupied it. The Anantavaram plates of Prataprudra Deva state that Kapilendra Deva had sent his son Hamvira to conquer Hampi, the capital of Vijayanagar who succeeded in conquering it and forcing the emperor to pay tribute. The inscriptions of Srirangam temple near Trichinapalli dictate that Hamvira Deva captured as far as Trichinapalli, Tanjore and Arcot in south before stopping his advance. Hamvira Deva assumed the title of Dakshina Kapileswara Kumara Mohapatra in the year 1464 AD. His son Kumara Kapileswara Mohapatra became the governor of the southernmost territories of Chandragiri in the year 1464 CE after its conquest. As per the most recent discoveries in July 2019, a Telugu inscription belonging to 15th Century AD has been found at Jakkampudi village (suburbs of Vijaywada) which was issued by Hamvira Mahapatra, son of Kapilendra Deva. The inscription states that Hamvira Deva had conquered south upto Rameswaram from Vijayanagar ruler Mallikarjuna.The inscription describes the king while he was camping at Bezawada (Vijayawada) around 1464 AD, during the war.  The inscribed tablet also revealed that Hamviradeva had gifted the Jakkireddypalle (Jakkampudi) village to Gods, Papavinasanadevara & Rudradevatas. He put had the Brahmins of Bezwada near Krishna River in-charge of the maintenance of the Jangama. A Ganesa idol representing the Gajapati art style too was retrieved from the nearby fields too.

Kapilendra Deva was a patron of Vaishnava. He expanded the Jagannatha Temple in Puri. Soon under his patronage, the Puri Jagannatha temple became the center of efflorescence of drama, dance forms (Odissi) and other forms of art. Kapilendra Deva was a great patron of Vedic culture and had written a Sanskrit play called Parashuram Bijaya. Odia language has an uninterrupted history of evolution (ancient Odia, medieval Odia and modern day Odia) of 2000 years and the modern day Odia became the official language of administration during his reigns. Under his patronage, Odia poet Sarala Das wrote the Odia Mahabharata known as Sarala Mahabharata. Various other poets and writers were also promoted by him, notable among them were:-

Though he was a staunch Vaishnava, Kapilendra Deva built the famous Shiva temple named Kapileswara temple in Bhubaneswara. Kapilendra Deva took the title of Routray which literally translates to “chief servant among all servants”. Routa or Rauta means “sevaka” or servant, while Raya means king. So literally, Kapilendra Deva declared himself as the chief sevaka, or king of sevakas of Lord Jagannatha.

During his reign, Kapilendra Deva made many architectural changes in Jagannath temple complex. He built the Narendra tank after his martyred younger brother Veer Narendra Deva. The tank has sixteen ghats, out of which fourteen ghats are named after his fourteen nephews. The two fortified walls of Jagannath temple complex- the inner wall Kurma Prachira (measuring 400’ x 278’) and the outer wall Meghnad Prachira (measuring 665’ x 644’) were constructed during his era. During his rule, he constructed two Dadhivamana temples, one each at the villages of Kuanrapur and Gopinathpur in Cuttack district.The Chandan Jatra of Sri Jagannatha was initiated by Kapilendra Deva himself. He used to donate a lot of amount to the Jagannath temple. During his 41 anka of his rule, he donated many jewelleries and utensils to the Puri temple. The Gajapati was man of charity who had solely pledged to donate equal amount of wealth and rights to the Brahmins. He banished the Chaukidari tax paid by the Brahmins previously and also banned the resumption of waste and pasture lands. He had ordered his officials to follow the path of justice, righteousness and spiritual teachings and had issued warning to them to face the punishment of exile if they failed to do so.

Kapilendra Deva Routray, whose coronation took place on 29th June, went on to establish one of the mightiest empire and dynasty in the history of Kalinga- the mighty Routray Gajapati dynasty. However during the last days of his life, Kapilendra Deva faced a disturbed mindset due to treacherous internal subjects. Owing to his troubled state of mind, he chose his younger son Purushottam Deva as the successor to the throne rather than the much worthy Hamvira Mohapatra. This led to the war between two brothers, which proved advantageous to Bengal Sultanate, Bahamanis and Vijayanagar. Due to unstable administration, Kalinga lost a lot of border territories. Hamvira Mohapatra defeated Purushottam Deva and ascended to the throne briefly. However, soon Purushottam Deva made a massive attack and regained the throne for himself in a decisive victory. Hamvira promised to not fight for the throne again. Purushottam Deva again had to start everything afresh with an eye to gain back the lost territories of Kalinga.

In a major setback to Pakistan and China’s schemes, India gears up defence against drone warfare with Israeli technology

AAP leader who insulted Bhagwan Satyanarayan, gets kicked out of Somnath Mandir by devotees