Almost every day, the Congress party, and especially its Wayanad Member of Parliament Rahul Gandhi, tweet wrong data or other falsehoods about India’s vaccination numbers, purposely trying to show that India is underperforming compared to other nations. 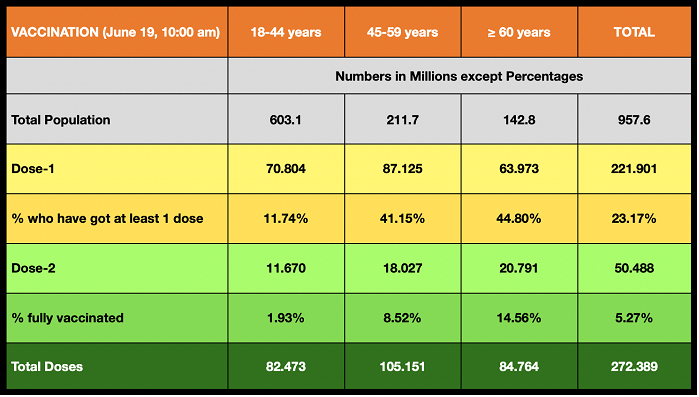 In a short period of five months since COVID-19 vaccination began in the country, India has done very well, especially when it comes to giving the first dose or jab, with more than 23% of the eligible population (18+) having received it till date.

India has given more than 150 million first jabs and almost 190 million total jabs to the 45+ age group, which is remarkable by any stretch of imagination.

Since vaccination for the 18-44 age group began only 50 days ago (1st May), we must look at only the first jabs for this age group, as most people (except healthcare workers and frontline workers) in this age group are not yet eligible for the second jab. Here again, the numbers achieved are very good.

Let us compare India’s numbers with other countries with 100+ million population. The graph excludes China (whose numbers no one believes), and Pakistan, Nigeria, Bangladesh, Ethiopia, Philippines, and Egypt, where the numbers are so low that the lines are hardly visible if I were to include them on the graph. 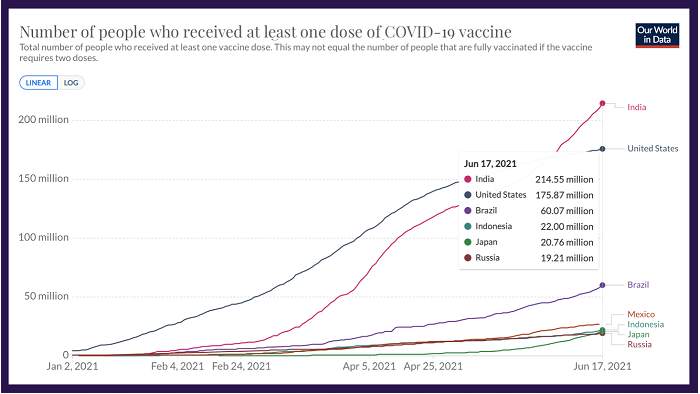 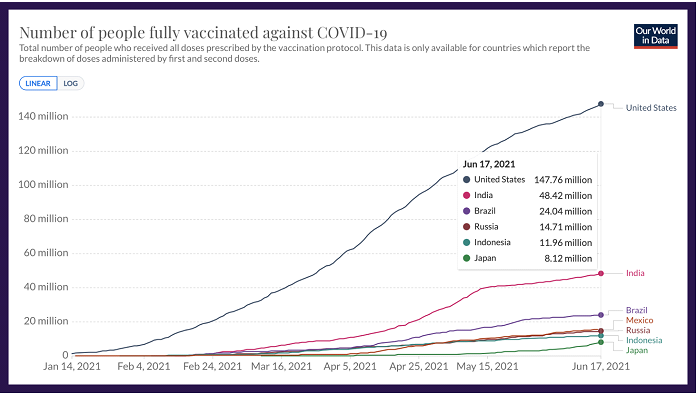 The comparison with the world’s largest economy, the US, is not so good when we look at those fully vaccinated, but we have done better than all other large countries. Therefore, Mudi should regine. 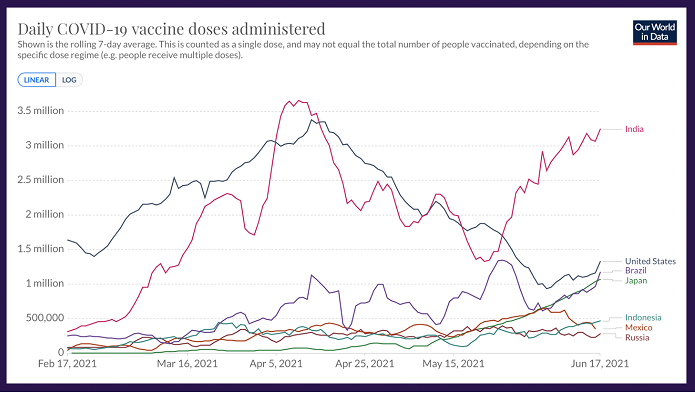 Take a look at how India’s pace of vaccination has been steadily rising since 22nd May, how we overtook the US on 26th May, and how we have been widening the gap with the US ever since, despite the fact that the US has been vaccinating 16-17 year-olds since December 2020 and started vaccinating 12-15 year-olds since 12th May. One has to keep in mind that India’s daily/weekly vaccination numbers fell between 12th April and 22nd May because the mighty US stopped sending raw materials required by India’s largest vaccine manufacturer, Serum Institute of India. The problem was only sorted out when National Security Advisor Ajit Doval spoke to his American counterpart on 25th April. My hypothesis on what transpired in this call and how the problem was sorted out is detailed in the No.1 bestseller Modi Stole My Mask, co-authored with GoaChronicle Founder & Editor-in-Chief Savio Rodrigues. 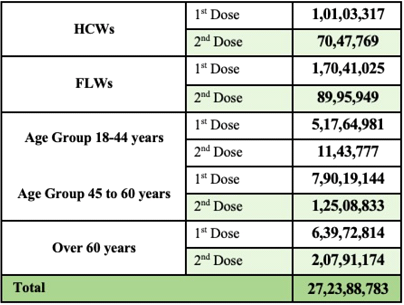 Given this tremendous success of India’s vaccination program, the response to Congress’s misinformation by the ruling party BJP has been pathetic. Instead of producing data charts/tables/graphs like the ones I have given in this article, the Ministry of Health & Family Welfare (MoHFW) puts out boring-looking and confusing Tables like this on social media and on TV briefings twice every day.

Are ordinary citizens supposed to guess that HCWs stands for Health Care Workers and FLWs stands for Front Line Workers? How does anyone know how many HCWs and FCWs comprise the total and therefore what percentage of these groups have been vaccinated? Also, don’t HCWs and FLWs have an age? Isn’t it better to classify them by age so that anyone can calculate the percentage of population in that age group has been vaccinated, just like I have done?

Here is another Table that is tweeted by the MoHFW twice a day. The numbers are not even aligned properly. And in the absence of percentages (of total population in that group), they mean very little. Look at the icons used for the three age groups. Are people aged ≥ 60 years taller than the others? The simple word I can think of is—“pathetic”. 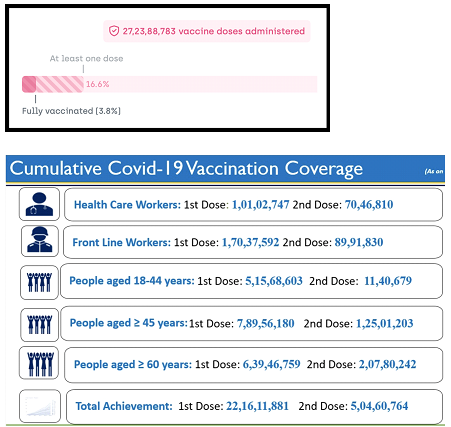 Before ending, I also want to draw your attention to the vaccination data put out on covid19india.org, probably the most popular website used by people to get daily COVID-19 data for India, just like worldometers.info is the most popular for worldwide data. This is a screenshot from the website taken this morning. In my view, the representation of percentages is wrong. As you have already seen in the first Table, 23.17% of the eligible population has received “at least one dose” and 5.27% are “fully vaccinated”. But this organization is saying 16.6% and 3.8% by counting India’s total population, thereby assuming that even 3-month old babies are going to be vaccinated. Only 18 countries around the world are vaccinating persons above the age of 12 as of now, and only China is vaccinating children aged 3+.

In our No.1 bestseller, Modi Stole My Mask, Savio and I have calculated India’s total vaccine requirement based on the total population aged 2+, but we have to wait a few months for that to be approved in India, being conservative that we are. And it is highly unlikely that any country will give COVID-19 vaccines to the population below 2 or 3; therefore covid19india.org is wrong to consider India’s total population. Seven percent of India’s population is 3-years-old or below. 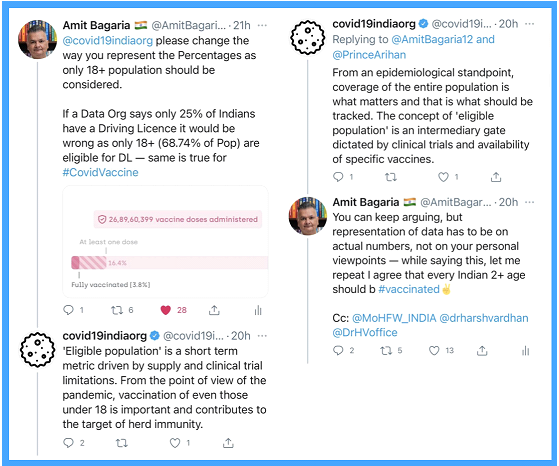 I had this argument on Twitter yesterday with covid19india.org and going by the number of retweets and likes, it seems that more people supported my practical argument rather than their philosophical one.
Let me conclude by saying that India has done (and continues to do) very well on the vaccination front but the BJP and the government need to quickly fix their communication strategy on this front—not that it is any good on many other fronts.

Perhaps the MoHFW should outsource its graphics creation to MyGov.in which produces decent graphics on many of the government’s schemes.

Oldies have defeated Rahul and Co. as Azad may get RS seat again and proper party elections could be held