HOME » Politics » Opinions » There is no DMK tsunami in Tamil Nadu as most pollsters predicted. And that gives AIADMK a chance to recover

There is no DMK tsunami in Tamil Nadu as most pollsters predicted. And that gives AIADMK a chance to recover

by Mahima Kalra
in Opinions
1

The exit polls, that were released two days ago, got most of the states right except for Tamil Nadu. The majority of the respected pollsters predicted a tsunami of DMK in the state and gave more than 170-180 seats to the party, but, as per the trends till the time this article was being written, the DMK+ is leading on around 140 seats. On the other hand, AIADMK+, to which pollsters gave around 55-60 seats, is leading on more than 80 seats. 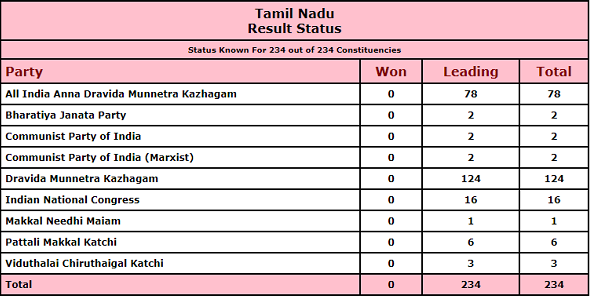 Moreover, there is not much difference between the vote share of the two parties with 37.3 per cent for DMK and 34.4 per cent for AIADMK. So, AIADMK remains a major force in the state of Tamil Nadu and the results give the party hope for revival and win back power in 2026. 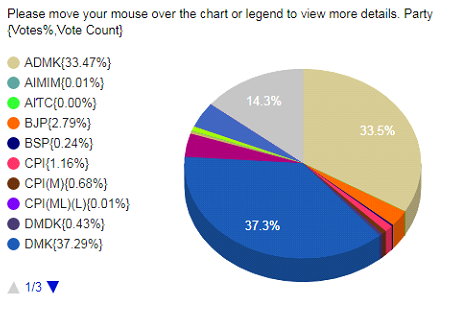 A few months ago, AIADMK was all shattered and there was massive infighting between different factions. After the death of Jayalalitha, her protege, V K Sasikala was expected to succeed her but given the fact she was in jail on corruption charges, the state was being run by EPS and OPS.

EPS and OPS had their own factions, there was a faction that wanted Sasikala to lead the party when she comes out of jail and various other factions. However, unlike Jayalalitha, none of the contestants enjoyed popularity among the masses of the state. And therefore, everyone was walking with their own faction.

However, after the intervention from Union Home Minister Amit Shah – BJP allied with AIADMK for the 2021 assembly election – the party got its act together and put up a cohesive fight against the DMK.

In the last few months, the BJP itself had increased its activities in the state. Khushbu Sundar– one of the most popular actresses of Tamil Cinema, joined the BJP after she quit Congress on the grounds of being suppressed by the high command of the party. Also, former DMK MP K P Ramalingam, who has been suspended from the party a few months ago for speaking against M K Stalin and aligning with M K Alagiri, has joined the BJP in the presence of Amit Shah.

The BJP brought all the factions together and provided its expertise to AIADMK to ensure that the incumbents go for a good fight even if they lose. AIADMK could not win the election after 10 years of anti-incumbency and the loss of its most popular leader, J Jayalalitha. But the vote share of the party did not decline much and it also bagged a respectable number of seats.

The story of AIADMK is not finished yet, thanks to the assistance from Amit Shah. Although, the party needs a mass leader to come back to power again in 2026. Given the fact it has a lot of time to prepare for the next election, some Tamil cinema star would definitely see an opportunity and join the party to take it forward.

2021: Puducherry finally comes out of the shadow of Tamil Nadu and finds its own existence