BJP’s star candidate Suvendu Adhikari on Sunday outsmarted TMC supremo and West Bengal Chief Minister Mamata Banerjee by a margin of 1,956 votes to emerge as the winner in the penultimate seat of Nandigram. Suvendu has emerged as a giant slayer, who defied a state-wide pro-TMC wave and defended his fort of Nandigram against a sitting chief minister. His car has been attacked, he himself has been heckled and abused in the past 24 hours by TMC’s goons. Meanwhile, BJP workers continue to be killed in the state, and their businesses, houses and even pets are not being spared by goons of the freshly-elected party. 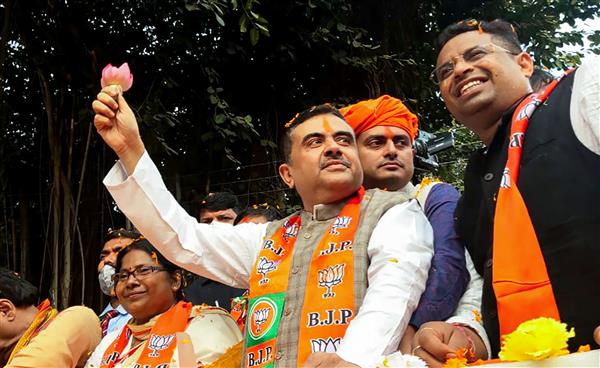 Suvendu Adhikari is the biggest asset of the BJP in West Bengal. It would be only wise for the saffron party to nourish Adhikari as the face of the party for the next five years. He must be tasked with critical strategizing on behalf of the party at the ground level. When the time comes, which will be in 2026 – Suvendu Adhikari must be projected as the BJP’s chief ministerial candidate. There is no doubt that the BJP’s fortunes in Bengal took a massive hit due to its inability to give the people of Bengal a clear alternative to Mamata Banerjee, in the form of their own CM candidate.

Essentially, what is needed on the part of the BJP is for it to make a Himanta Biswa Sarma out of Suvendu Adhikari. Already, Adhikari has put on display his ability to defeat a sitting chief minister who walked confidently to his constituency to fight the elections from there. Suvendu Adhikari must be given legroom by the party to prepare the ground for the fight of 2026, and prior to that, the Lok Sabha polls of 2024. He must be allowed to take on Mamata Banerjee in all upcoming battles in a manner he deems fit. As a matter of immediacy, the BJP must make sure that Adhikari is made the Leader of Opposition in the West Bengal assembly.

Himanta Biswa Sarma’s story is very similar to that of Suvendu Adhikari. Having been insulted in the Congress party, Sarma walked off and joined the saffron camp. The Congress’ biggest mistake in the past decade has been that it allowed Himata Biswa Sarma to walk away. Sarma has single-handedly ensured two consecutive wins for the BJP in Assam and has delivered the Northeast as a whole to the BJP. An impenetrable stronghold of the Indian National Congress was turned into an NDA fort in a matter of five years by Himanta Biswa Sarma.

Just like Himanta Biswa Sarma, Suvendu Adhikari has a huge mass connect and commendable organisational skills. He was one of the handfuls of leaders in the TMC who didn’t have to rely on Mamata’s popularity and charisma to win elections. Adhikari is also a proven winner as he has won both the Lok Sabha and Assembly elections on multiple occasions, with the Nandigram victory of Sunday coming as the biggest of them all.

If given authority and powers within the party, Suvendu Adhikari will be able to wrest West Bengal from Mamata Banerjee in favour of the BJP as soon as the next assembly polls. The BJP must not wait a single wakeful moment. Its Himata Biswa Sarma experiment has worked wonders in the state of Assam and the Northeast. Now is the time to allow Suvendu Adhikari to fight for the party in West Bengal. West Bengal will not be an easy state to win now. Mamata Banerjee knows that the BJP can defeat her. She will do everything in her power to consolidate her vote bank and use violence to create a sense of fear among voters.

For the BJP, creating momentum like it did prior to and during these elections will also be equally difficult. Such factors make it all the more important for the saffron party to empower Suvendu Adhikari so that he can deal with the TMC in a befitting manner, and in a language that they comprehend.

5 Couple Watches That Would Make an Amazing Anniversary Present