On May 2, TMC supremo Mamata Banerjee received a landslide mandate for a third straight term in the West Bengal assembly. However, within two days, goons in the state have allegedly gone on a rampage to show what the next five years entail for the non-TMC supporters. 6 BJP workers have been slaughtered and in total 11 have lost their lives including an ISF worker, which partnered with Congress and Left in the polls. And to make matters worse, the so-called non-partisan media and its ‘fearless’ journalists have either kept mum or tried to spin the entire narrative on its head.

Rajdeep Sardesai, the champion journalist of the liberals who allegedly lives and dies by the notion of ‘speaking truth to power’ was seen mollycoddling the Bengal government and especially the CM. Instead of asking tough questions, Rajdeep put a halo around Mamata’s head and gave her a clean chit.

“2 days ago, @MamataOfficial told me her first task was to tackle COVID. But tackling COVID needs peace. Violence on political rivals must stop. Her spectacular win is a mandate to lead ALL of Bengal not only her supporters. Her message of restraint must now be observed by all!” tweeted Rajdeep with a praying hand emoji.

2 days ago, @MamataOfficial told me her first task was to tackle COVID. But tackling COVID needs peace. Violence on political rivals must stop. Her spectacular win is a mandate to lead ALL of Bengal not only her supporters. Her message of restraint must now be observed by all!🙏

While the BJP workers were lynched, the liberal media was more interested in twisting the narrative by pinning the blame on BJP. According to The Wire Journalist named Himadri, BJP was killing its own members, albeit lynching them so that it could create communal unrest. Such cutthroat armchair journalism whilst sitting in cushy air-conditioned rooms is something that other media houses should learn.

BJP has unleashed a massive disinformation campaign in Bengal to create a communal unrest.#WestBengalElections2021

Soumit Mohan, an NDTV journalist put out a highly insensitive tweet that gives a sneak peek into the work culture of NDTV and how hate and violence are normalized in the network which has produced communal charlatans like Ravish Kumar.

Quoting a tweet report about ABVP activists being allegedly attacked by TMC goons, Mohan said, ‘jaisi karni, waisi bharni’ (as you sow, so shall you reap). 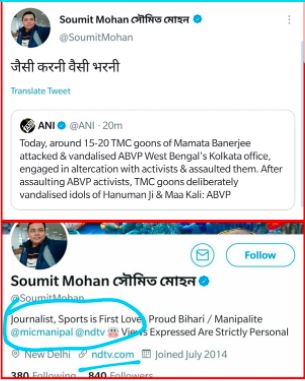 After receiving public backlash for his dreadful comments, Soumit took the tried and tested method of shifting the blame by claiming his account was compromised. 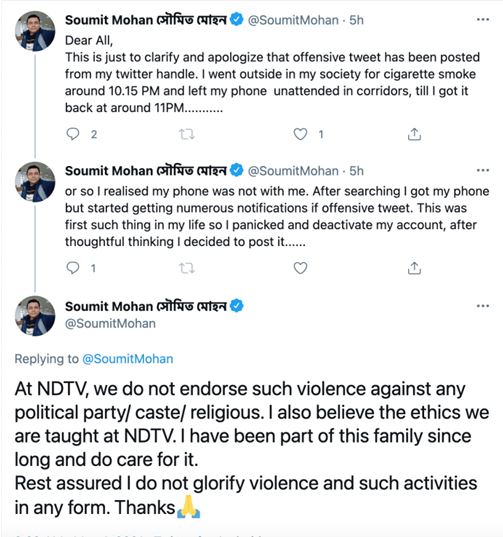 At the time of writing the report, Mohan had protected his account, to save himself from further embarrassment as netizens would have dug out similar distasteful tweets from his past.

Then came Saba Naqvi, the lifetime member of the Hate-Modi brigade and drew parallels to the Delhi riots and called the situation in Bengal, making of BJP. She evoked BJP leader Kapil Mishra’s name whilst conveniently forgetting that her comrades in Tahir Hussain and Umar Khalid are the ones currently lodged in jail for their part in the riots. Not any BJP leader.

“After losing Delhi elections on February 8 last year, when BJP leaders made incendiary threats, they eventually kept complaining and threatening till there were riots in Delhi in late February. And Kapil Mishra who threatened violence still walks free. Just saying,” she tweeted.

After losing Delhi elections on February 8 last year, when BJP leaders made incendiary threats, they eventually kept complaining and threatening till there were riots in Delhi in late February. And Kapil Mishra who threatened violence still walks free.
Just saying.

If their wild assumptions are to be believed for a hot second, it still needs some evidence to back it up. There are videos of BJP office being burnt, a BJP worker sobbing and recording video, mere hours before he is lynched and yet the liberal journalists of the country find their way to twist the narrative. It takes some level of intellectual and moral bankruptcy to stoop to such level to justify the murder and killing of an individual.

BREAKING: Violence breaks out in Bengal soon after the #WestBengalElections results were clear. BJP party office in Arambagh is set on fire. Allegation against TMC, TMC denies charge. pic.twitter.com/70LwYTUPuA

This is a strategy Mamata learnt from communists. Through political kiIIings, communists finished off Bengal congress.

BJP Centre needs to act & protect its local cadre before both cadre & party are finishedpic.twitter.com/4khAYNH0dL

It is not that anybody had not anticipated the current situation, albeit it is the normalisation of the violence by the media that is utterly shocking. The fact that some section of the media believes in the idea that ‘BJP had it coming’ should be a reason enough for people to drop their rose-tinted glasses and look at the reality of the biased media and its even biased journalists.

It is so bad that even 'liberals' in Bengal have reluctantly started speaking up against the political violence against the BJP.

With the situation expected to turn for the worse, BJP national president JP Nadda landed in Bengal today on a two-day visit and immediately went to the houses of the BJP workers who were allegedly attacked by miscreants and goons.

#NewsAlert | @JPNadda visits the homes of the BJP workers who were allegedly attacked by the TMC party workers after the poll results in West Bengal. pic.twitter.com/2fNzFOKIrq

Mamata had a golden chance to emerge as the leader of the opposition to tackle BJP on the national stage after receiving such a mandate but instead, goons in her state have gone on a brutal rampage against opposition party workers. Aided by the media, an alleged ‘reign of fear’ has just begun in Bengal and the liberal journalists have turned a blind eye to the blatant hooliganism.

In the time of a heightened political violence, why Bengal needs a governor like Jagmohan Malhotra