Indian nationalists were elated yesterday as Twitter on Monday blocked 250 accounts for vitriolic tweets made by them over the past few days, particularly on January 30 – when the said accounts used a highly outrageous hashtag and made false comments about the intentions of the Modi government viz. the protesting ‘farmers’ who are camping on the borders of Delhi. No sooner did the celebration of such rightful action being taken by Twitter start reaching its peak that news came in of the social media platform restoring many of the accounts it had blocked earlier in the day.

The accounts which were blocked by Twitter had tweeted or retweeted the #ModiPlanningFarmerGenocide hashtag and made “fake, intimidatory and provocative tweets,” in connection with the ongoing farmers’ protests. Among those who were blocked by Twitter were handles of Kisan Ekta Morcha, The Caravan, Sanjukta Basu, CPM member Mohammad Salim, etc. The timeline of each blocked account was blanked and “Account withheld” was written across it, with the statement below it reading, “Your account has been withheld in India in response to a legal demand.” 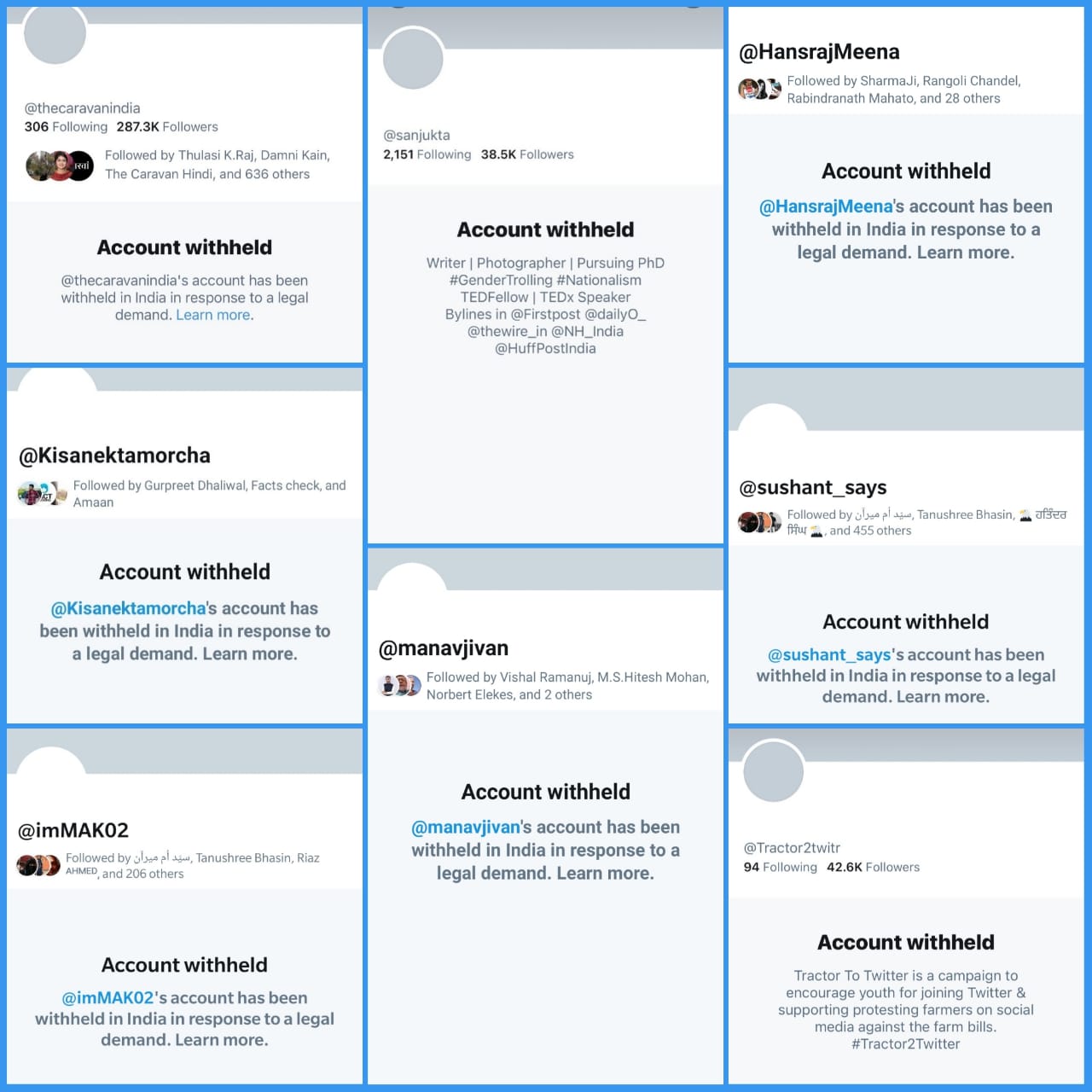 The accounts were withheld in India upon the request of the Ministry of Electronics and Information Technology, headed by Ravi Shankar Prasad. The IT Ministry then directed Twitter India to block the said accounts, to which the American social media giant agreed, albeit temporarily. The IT ministry had issued directions to Twitter under Section 69 (A) of the Information Technology Act. Section 69(A) of the IT Act empowers the government to block access to content that is seen to pose a threat to public order.

However, soon, as per a report by the Hindustan Times, a decision to restore the accounts was taken after a meeting between Twitter officials and those from the ministry of electronics and information technology. Twitter told the ministry officials that the content withheld was “speech and newsworthy” – a brazen normalisation of deranged individuals insinuating a pre-emptive genocide on a section of Indians.

“Twitter had blocked these accounts in the interim in response to a valid legal request from the Ministry of Electronics and Information Technology pending discussions with them,” HT quoted anonymous sources as saying. The discussions, as is evident, seem to have yielded no constructive and lasting results, as the accounts which were blocked were soon put back on. This leaves us wondering, why did the IT Ministry make a gigantic clown of itself if it was not able to back up its actions and tell Twitter to continue with the ban as long as the government would deem fit?

The restoration of the said accounts by Twitter has acted as yet another testimony to the platform’s inherent bias against India’s nationalists and the right-wing, so much so that it is willing to defy the directions of the government too to pander to the country’s coterie of left-liberals. Twitter has sent a resounding signal within India, that hashtags as ludicrous as #ModiPlanningFarmerGenocide are an acceptable form of speech on the platform, while conservatives in the country merely voicing their opinion on any given matter can result in far-reaching consequences.

Clean Air, traffic, economy, and energy – how one clause in the budget will improve these 4 areas