by Yash Joshi
in Trending
1

On a day which was supposed to celebrate all things India, the people of the nation woke up to a shocking turn of events. The Red Fort – the pride of Independent India was being desecrated in front of their eyes as the Nishan Sahib flag was hoisted at the Red Fort. This was all a part of the nefarious design of the Khalistani terror group Sikhs For Justice (SFJ) which had earlier thrown a similar challenge to the fake farmers in return of a monetary reward. The so-called farmers have succeeded in their mission and perhaps are now awaiting their dues from SFJ for the desecration of Red Fort which is an act of terrorism in every sense.

At the same venue where the tricolour is unfurled on the occasion of Independence Day every year, the protesters masquerading as farmers unfurled the flag of Nishan Sahib which was a part of the nefarious plan of SFJ to bring a bad name to India and catch the eyeballs of the International media on Republic Day.

It is pertinent to note that earlier, SFJ had offered a reward for $2,50,000 for raising Khalistani flag at the India Gate, as well as, the Red Fort, on Republic Day.

Sikhs for Justice had released a letter, along with a video of its founder Gurpatwant Singh Pannu where the cash-reward was espoused to incite the protestors looking to make some quick money. 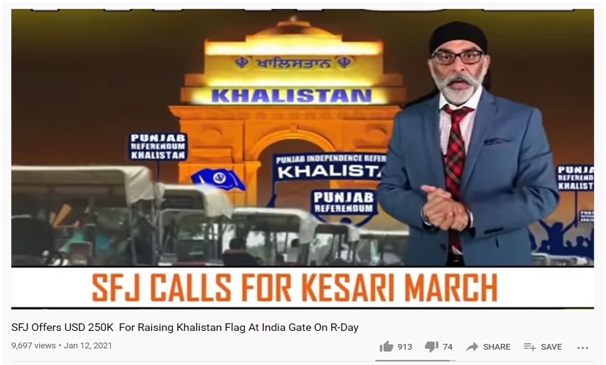 Sikhs for Justice had released a letter, along with a video of its founder Gurpatwant Singh Pannu where the cash-reward was espoused to incite the protestors looking to make some quick money.

“26 January is coming and on the Red Fort, there is an Indian tricolour. Remove the tricolour on 26th of January and replace it with the Khalistan flag,” said Pannu in the video.

Besides 2.5 lakh US dollars, SFJ also used the bait of giving foreign citizenship to lure the protesters. “The laws of the world are with you. If the Indian Government points a finger at you, you and your families will be brought to the foreign countries under the United Nations laws,” the SFJ founder said.

It is safe to say that the SFJ got what it desired after the protesters laid siege on the Red Fort in New Delhi.

Though the usual apologists are now justifying the act of war at the Red Fort, claiming that it’s not a Khalistani flag which was raised but of the Nishan Sahib, they forget that the Red Fort is no Gurudwara – it is a place of national importance and no flag other than the tricolour should be hoisted there.

‘Farmer was shot in the head,’ Rajdeep Sardesai tried 2002 tactics amid Delhi siege, but social media will ensure his arrest