No Result
View All Result
Newswire
Woman throws 3-year-old from building in Hyderabad 1 hour ago
‘People of Bihar living in Bengal will vote for development’ 2 hours ago
Manipur talk show gets notice under new IT rules, withdrawn later 2 hours ago
SC ponders on appropriate curb to stop people from using bad language to criticise court 2 hours ago
PM likely to address 20 rallies in poll-bound Bengal 2 hours ago
Being athlete-mother has not a bar to success in shot circle 2 hours ago
Next
Prev

After the 1991 Economic liberalisation, almost all communities registered exceptional growth in education, Muslims however lag behind

In the last three decades, the education level among all the communities of the country has gone up exponentially. The so-called lower caste (SC, ST, and OBC), has been able to bridge the gap it had with the upper caste in terms of education, reveals the data from NSSO 2004-05, Periodic Labour Force Survey 2017-18, as well as National Sample Survey, 75th round. However, Muslims still lag behind in terms of literacy.

As per a report by The Print, a study conducted by professors from Madras School of Economics revealed, “Over the last decade, the levels of education across all social groups have increased in urban India. The education pattern of those belonging to OBC is now similar to GC.” 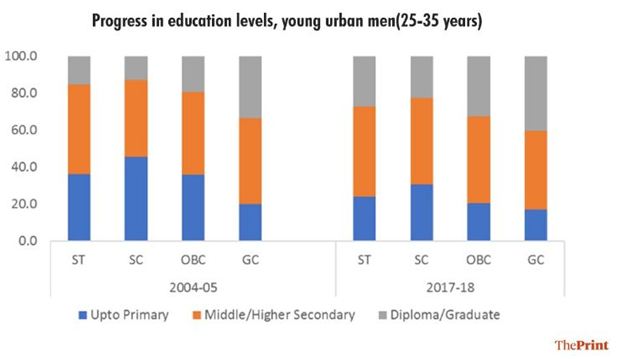 The report further stated, “There is also a sharp increase in the proportion of young men who are educated beyond primary schooling among SC and ST.” 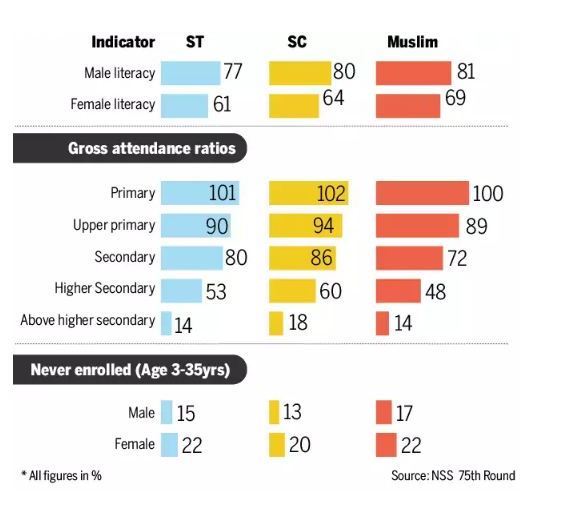 However, the data released by the 75th round of NSS suggests that the education level among Muslims is less than that of the SCs and STs. The low educational achievement among the Muslim families is a result of poverty and this is reflected in the upward economic mobilisation of the communities, in which the community fares worse.

The literacy rate among Muslims is 68 per cent while for the general population it is 73 per cent. The percentage of children in the age group of 6-14 who never attended school is 4.4 per cent for the overall population while it is 8.7 per cent for Muslims, almost double the national average. The school dropout rate among Muslim children is the highest which results in a small number of Muslim graduates. The gap between Muslims and other communities widens as we move upside on the ladder of educational attainment.

The SCs, STs, and OBCs capitalised on the benefits under reservation and climbed upward in the education ladder. “Some of the increase in higher education levels could be a result of the affirmative action by successive central and state governments such as reserving a specified number of seats in higher education institutions and a lower entry threshold for students from certain castes,” The Print reports.

However, the Muslims, the majority of whom are included in the OBC category, have neither capitalised on reservation benefits nor on the Economic Liberalisation of 1991, which opened the doors for wealth creation and education to every caste and community.

The income of Muslim families is very low. In urban areas, the female worker participation rate is good for other communities but it is still the lowest among the Muslims. This is also due to the fact that Muslims who lack education, are easily influenced by the diktats of Imams and Ulemas, who stand against women’s participation in the modern formal workforce.

The number of salaried workers in the formal public and private sector jobs is the lowest among Muslims as well. Representation of the community is also low in high-level government jobs like civil services, judiciary, etc. The low participation of the female workforce, low formal employment among the male workforce, low representations in bureaucracy, judiciary, and government power structure hurts the income and economic prospects of the Muslim population.

There is a vicious cycle in which illiterate parents consider kids as assets, procreating more kids. These kids remain underweight and malnourished due to low income. The low income of parents keeps the children away from education and the cycle goes on. An interesting thing here is that this vicious cycle still continues for seven decades despite the image of Congress being a Muslim-friendly party.