by TFIPOST News Desk
in Trending
4

Yesterday’s horrific events that transpired in the national capital Delhi were a blot on the entire country’s reputation. Make no mistake, the Red Fort siege was no less than the insurrection attempt that took place at the Capitol Hill, earlier this month. However, unlike last time where Twitter went in an overdrive mode to ban and censor any content that even remotely adhered to the conservative end of the political spectrum, the social media platform remained an idle observer in facilitating the cycle of violence and bloodshed, this time around.

Part-time journalist and a full time ‘Vulture’ Rajdeep Sardesai once again peddled fake news when the rioters were running amuck across the capital. Fully aware that his tweet can potentially aggravate the sensitive law and order situation in Delhi, Rajdeep tweeted, “One person, 45-year-old Navneet killed allegedly in police firing at ITO.” In a bid to pump up emotions, he added, “Farmers tell me: the ‘sacrifice’ will not go in vain.” Rajdeep who has a flair for theatrics to amplify his lies simultaneously posted the photo of the person draped in Tricolour who had just died.

Fortunately, the Delhi Police released a video that brought out the truth and exposed Rajdeep’s cheap journalism ethos. The protestor had died trying to ram the police barricade. Once the social media got hold of Rajdeep’s lie, he quickly deleted the tweet and went back to playing a responsible journalist, issuing sermons to others.

Read more: ‘Farmer was shot in the head,’ Rajdeep Sardesai tried 2002 tactics amid Delhi siege, but social media will ensure his arrest

However, 24 hours after Rajdeep first put out the Tweet, the Jack Dorsey-led platform Twitter is yet to ban him or even issue any warning. Rajdeep did a full segment of live news with his channel’s reporter where he claimed that the protestor had been shot in the head and that the violence erupted only after this incident.

This is the kind of “he said she said” reporting that comes out of kashmir. Thankfully this time there was video evidence contradicting the story. Imagine what would’ve happened if there wasn’t? They’d even dismiss the autopsy as fabricatedpic.twitter.com/HMwCH9jbIW 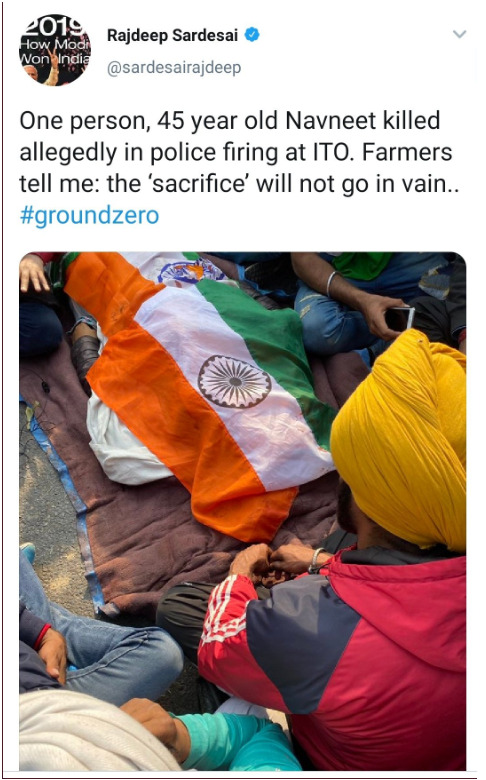 The hypocrisy of Twitter was on full display when alleged Farmers’ leaders were openly enunciating their plans of breaching the Red Fort.

“Farmer leader” Gurnam Singh Chadhuni laid out their plans openly, before the media. The government failed to foresee this violence despite clear indications and many journalists are still defending and romanticising the unfortunate event.

#WATCH | Undated, viral video of Rakesh Tikait appealing to his supporters to be armed with lathis & be ready to save their land.

Read more: Delhi under siege: The desecration of Red Fort is exactly what fake farmers wanted and govt failed to call their bluff

Several left-liberal journalists indulged in whataboutery to justify the violence and arson caused by the Khalistan terrorists masquerading as farmers. The government repeatedly indulged the farmers in dialogue, even proposed to delay the enactment of the law for 18 months. Furthermore, the Supreme Court had stayed the bill till the committee constituted by it gave the final report, and yet if some farmers influenced by political opportunists like Rakesh Tikait and Yogendra Yadav sat in the frigid cold temperatures of Delhi outside, then whose fault was it? Certainly not of the government.

Imagine if any RW handle had made these accusations, he/she would have been instantly thrown away from the echo chambers of the microblogging platform but because the tweets came from the opposite ideology members, they stated on the Twitter user’s timelines.

But today they will be taken on a tour BY POLICE to Red Fort & will cry out river of propaganda by showing broken railings & ticket counters.

They won't show how SEVERAL parked tractors were vandalized by Police.

The likes of Barkha Dutt openly spewed venom by unloading the entire blame on the Modi government. The terrorists who ran riot across the capital barely found a mention in her tirade on Twitter.

"Punjab was Indira Gandhi's Waterloo, PM is often compared to Indira Gandhi. He should not play with fire, not push Punjab back into its past"- a warning from @shrutikapila on the consequences of the fault lines at #FarmersProtests. Full show @themojostory https://t.co/VmGTMs3CQp pic.twitter.com/aGnCbKn33Z

While Twitter did nothing to stop the lie-mongers, it instantly suspended right-wing voices who merely voiced their opinions to support the Delhi police which was being chased by sword-wielding fanatics, tractor-ramming lunatics, and drug-infused drunkards from the hinterlands of Punjab looking to kill anyone in uniform.

A Nihang Sikh performing the Gatka dance (A form of Sikh martial art) to entertain the fascist police deployed by facist Indian govt to suppress the peaceful protests by peaceful farmers.

Love prevailing over hate. Beauty of multiculturalism! Beauty of my India. pic.twitter.com/DLIvVDEQqi

Twitter was quick to ban Donald Trump when he merely supported his followers without specifically giving any indication of storming the Capitol Hill. Here, ample evidence is available in the public domain where the left-liberals tried to instigate the riots, yet they are being allowed to go scot-free. Hypocrisy much Twitter, eh?