India’s banking sector enters its golden era, the sector will grow at a breakneck pace

The report of the RBI Internal Working Group (IWG), which recommended entry of private players and NBFCs in the banking sector, has brought a bonanza for banking and financial services stocks. Almost all the NBFCs and banks registered- except the publicly owned ones in India – are trading in green and registered significant gains today.

“If allowed, they would give strong competition to incumbents and may come up with innovative solutions with no legacy baggage. We may see greater damage on the CASA / retail liability front, especially at inefficient banks, as these entities have a strong ecosystem and enjoy high levels of trust among people”, said Brokerage firm Motilal Oswal in a recent report.

The RBI committee has also agreed to the industry’s recommendation of taking the promoter’s share to 26 per cent. Such a market-friendly report from RBI, the central bank and the banking sector regulators, was welcomed by the industry experts as well as investors. RBI has been known for its conservative regulatory standards and it gave the last banking license in 2003 to Kotak Mahindra Bank, therefore, a change in its stance is definitely a step in the positive direction and the market is cheering the same. 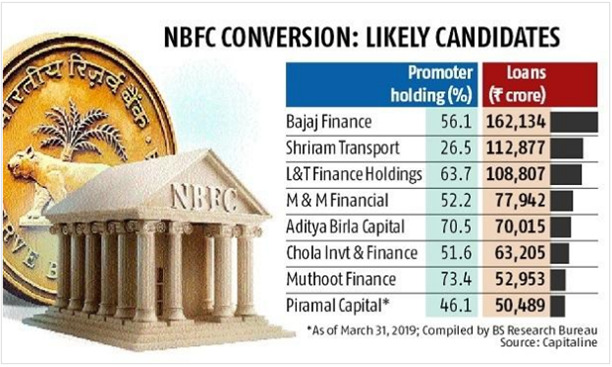 The latest step from RBI definitely comes from a nudge by the Modi government as the last economic survey criticized the nationalization of banks and argued that India should have at least six banks listed in the top 100 banks globally while we still have only one – the State Bank of India (SBI). The government has already given a hint for the encouragement of private players in the banking sector in the Economic Survey and now those plans are being implemented.

When talking about India, the annual net credit to the GDP ratio is around 52 per cent while deposit to it stands at around 67 per cent. The credit to GDP ratio is very low in India compared to the global average of 104 per cent and China’s 155 per cent. The deposit to GDP ratio in the country is also high compared to the global average of 49.5 per cent and Chinese average of 44.95 per cent. So, India has better deposit rates but the credit growth is still lower due to high lending rates. The previous governors of RBI (Raghuram Rajan and Urjit Patel) kept the lending rates very high even by conservative estimates.

The high loan rates hurt the economy as the lending rates grew at a very low pace and thus the economic activities slowed down. RBI is considered among the most conservative central banks and the cost of capital in India is very high when compared to other emerging markets around the globe.

The entry of more players would lead to efficiency in the banking sector and this would, in turn, lead to credit penetration among the small and marginal consumers. The Indian government, for very long, was shy of encouraging private banking and this led to lethargy and inefficiency in the country’s banking sector. The public sector banks of the country are a blot on the economy and burden on taxpayers. The encouragement of the private sector by the Modi government would bring back the ancient golden days of Indian banking when India had the most sophisticated banking system.

Indian ownership, Prizes worth Lakhs and employment for Indians – How PubG is coming back to India