Turkey, led by a rogue and rabidly radical Islamist extremist Recep Tayyip Erdoğan is in for tough times, as France corners it from all sides, and also starts arming the erstwhile Ottoman leader’s enemies with modern defence equipment. Under Erdoğan, Turkey has fallen out of favour with pretty much all the world powers that be, and the wannabe Khalifa’s hopes of resuscitating the ‘glory’ of the erstwhile Ottoman empire now seem more impossible than ever. The reason, of course, is Erdoğan’s rogue behaviour in Turkey’s neighbourhood, which is bound to spell a disaster for Turkey.

France has had just about enough of Turkish belligerence, and Emmanuel Macron, the French President is all set to foil Turkey’s attempts of turning the Eastern Mediterranean into the South China Sea. Turkey’s arch-nemesis – Greece has announced that it will be acquiring no less than 18 new Rafale fighter aircraft, for its military, along with four new frigates. Additionally, four frigates of Greece will also be refurbished.

The Greek Prime Minister, Kyriakos Mitsotakis said that the country’s armed forces will also obtain new anti-tank weapons, new torpedoes and new guided missiles, as well as hire 15,000 more people over the next five years. Four new helicopters for the armed forces are also all set to be acquired.

The somewhat emergency purchases by Greece, of which the 18 French Rafale aircraft form a major part, come in the backdrop of heightened Turkish belligerence and trespassing into what are Greece and Cyprus’ exclusive economic zones, according to the UN Convention on the Law of the Seas (UNCLOS). Erdoğan has deployed Turkish research vessels into the Eastern Mediterranean, which routinely venture for probes into Greece and Cyprus’ territorial waters in search of gas and hydrocarbons.

Turkey is dreaming of a hydrocarbon boom for itself amidst a free-falling economy, which explains why the desperate Khalifa has ordered Turkish vessels to intrude into Greece and Cyprus. “Ankara is now adding to the provocations in the Aegean, the undermining of peace in the entire Mediterranean,” Prime Minister Mitsotakis said. “The time (has come) to reinforce the armed forces as a legacy to the security of the country,” he added.

Much to Turkey’s dismay, France is ensuring that the European Union realises the threat posed by a rogue Recep Tayyip Erdoğan, and is pushing for sanctions against Turkey along with Greece and Cyprus for its persistent transgressions into waters where its vessels have no business being.

French President Emmanuel Macron, in the context of Turkey’s growing aggressive behaviour, said “The situation in the Eastern Mediterranean is worrying. Turkey’s unilateral decisions on oil exploration are causing tensions. These must end to allow a peaceful dialogue between neighbouring countries and allies within NATO.” Macron added, “I have decided to temporarily strengthen the French military presence in the Eastern Mediterranean in the coming days, in cooperation with European partners including Greece.” Macron has decided to dispatch two Rafale fighter jets and a naval frigate- ‘Lafayette’ to counter the growing Turkish threat to Cyprus and Greece. 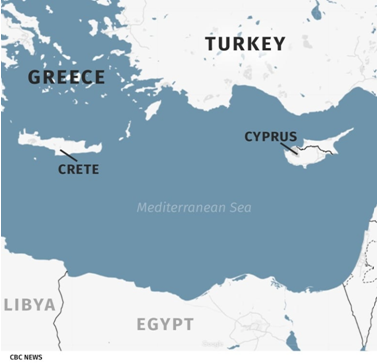 Turkey, as a matter of fact, is not a signatory to the UNCLOS, the law governing the seas and the sovereignty of various countries over a section of waters around them. However, even whileErdoğan might remain arrogantly dismissive about the law of the seas; France is teaming up with Turkey’s adversaries, Greece and Cyprus to teach it a lesson of a lifetime if it fails to mend its ways. The supply of 18 Rafale fighter aircraft to Greece, which India too has bought, shows how Macron is not shying away from arming countries to collectively take on Turkey when the time is right.

“Armed Forces Minister Florence Parly welcomes the choice announced today by Prime Minister Mitsotakis to acquire 18 Rafale aircraft,” a statement by France’s Armed Forces ministry said late Saturday. It further said, “This choice (of Rafale) strengthens the link between the Greek and French armed forces, and will allow them to intensify their operational and strategic cooperation.”

France is not just supplying arms to Greece and deploying its own assets in the Eastern Mediterranean, but, is also laying the path for its soldiers to enter Libya themselves and put Turkey’s plans of running a proxy Muslim-brotherhood government in the war-torn country to bed. France is not just irritated with Turkey backing the Muslim Brotherhood government in Libya, but, is also agitated with illegal Turkish actions against the Kurds, which also includes drone strikes against them, one of which ended up killing two Iraqi officials, thereby flaring up tensions between the two countries.

France realises that Turkey is China in the making, and its plans of turning the region into that which bears an eerie resemblance to the South China Sea, must be put into the coffin immediately. Therefore, Macron is teaming up with the EU and also providing military support to countries being hounded by Turkey, which wants to loot the seas to save its dwindling economy.

When PLA was provoking India, Indian Army was quietly planning to give it a bloody nose. China had no chance after that