No Result
View All Result
Newswire
Protesting farmers affix ‘black laws’ banners on NH signboards 36 mins ago
Shubman Gill: Used to be petrified of bouncers when I was young 39 mins ago
Rakul Preet begins shoot for ‘Thank God’ 42 mins ago
Fuel pellets to help raise UP farmers’ income 48 mins ago
Rajasthan Royals appoint Sangakkara as director of cricket 60 mins ago
First confirmed case of Covid in pet reported in South Korea 1 hour ago
Next
Prev

UK is down but definitely not out, and prospective trade deals suggest that it will bounce back to prominence

Down but not out

The GDP of the United Kingdom for the June quarter declined by 20.4 percent- highest for any country in Europe, and arguably largest for any big economy. “Today’s figures confirm that hard times are here,” UK finance minister Rishi Sunak said in a statement. “Hundreds of thousands of people have already lost their jobs, and sadly in the coming months many more will. But while there are difficult choices to be made ahead, we will get through this, and I can assure people that nobody will be left without hope or opportunity.”

Among large economies, the June quarter growth data of most big economies is available, and the United Kingdom, France, Italy, Germany, and United States suffered heaviest losses. So, Britain has formally entered a recession as GDP growth in the first quarter of this calendar was also negative. Overall, the GDP shrank by 22.1 percent in the first half of this year. 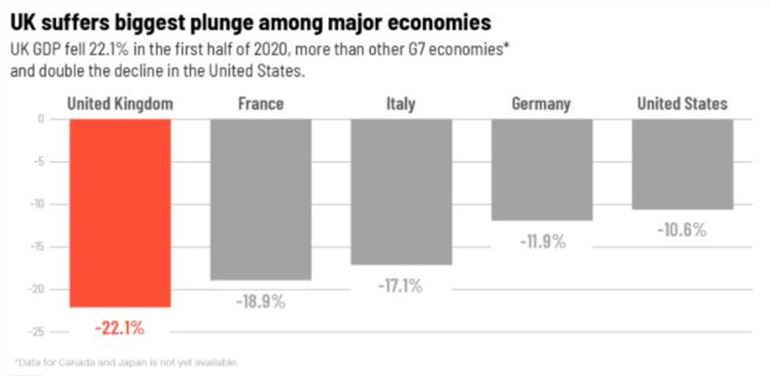 The effect of Coronavirus-induced lockdown and Brexit has started taking a toll on the UK’s economy, and the country needs effective leadership to bring the economy back on track. “Whatever the numbers are, and they won’t be pretty, the more important question is how quickly the UK economy can bounce back,” said Michael Hewson, an analyst at CMC Markets. “We have seen some progress on that,” he added.

However, the country has some resilient sectors like financial markets that can steer the economy in these tough times. Moreover, the country is negotiating free trade deals (FTA) with economies that have the potential to grow in the coming years.

The United Kingdom (UK) has emerged as a strong competitor of the European Union and it is using this time to aggressively pursue free trade deals with countries around the world, prioritising those with whom the EU does not already have an existing FTA like the United States, India, Australia, New Zealand and Canada. The British government has historic business, political, and cultural ties with these countries and it is now racing ahead of the EU to land free trade deals with them.

At the time of Brexit, the leader of the movement, Boris Johnson, had argued that once out of European Union, Britain would look forward to strengthening ties with countries like United States, India, Canada, and Australia- with whom the UK has a “special relationship”. 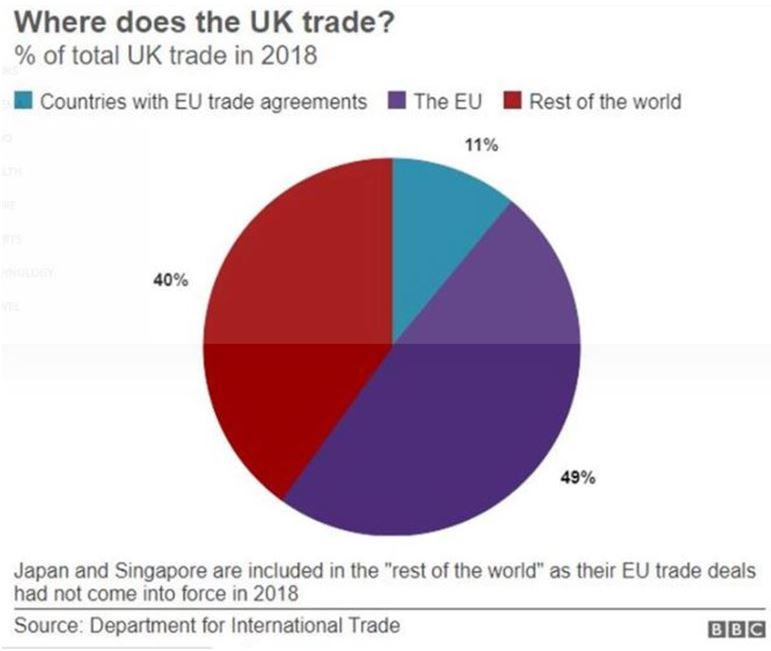 In trade negotiations with the European Union as well as countries with whom the EU had a free trade deal like South Korea or other European and Latin American nations, the British government, with minor tweaks, is copy-pasting the deals it earlier enjoyed as part of the EU.

India, which was negotiating an FTA with the European Union till now, has made it clear that now it will go with London for an FTA instead of Brussels. Recently the EU struck an FTA with Vietnam, which is India’s rival in attracting manufacturing, and therefore, New Delhi may have decided to dump the EU altogether.

The United Kingdom is also about to start negotiations with Australia and New Zealand in a post-Brexit world. In fact, Simon Birmingham, trade and investment minister of Australia said the country is “ready to help the UK find new beginnings post-Brexit and in doing so, open up new doors for our farmers, businesses and investors”.

The United Kingdom and the United States free trade deal, which will be one of the largest in the world given the fact that total trade between both countries is more than 200 billion dollars, is in near conclusion in its negotiations and is expected to be announced before the American Presidential election in November this year.

The Boris Johnson government is also looking for an FTA with Canada, with which the UK has historic political, business, and cultural ties.

‘We have been backstabbed, UAE is now our target,’ Turkey, Iran and Palestine suffer a huge meltdown after Trump’s Israel-UAE deal