Judiciary decides to pull the plug on frivolous PIL culture, and they are using Bhushan as the sacrificial lamb

The Supreme Court of India has taken suo moto cognizance of Prashant Bhushan’s tweet against the Supreme Court and the Chief Justice of India. The judgment has found the lawyer guilty of the contempt of court. The apex court has come to the conclusion that the tweets of Bhushan are aimed at shaking public confidence in the institution of judiciary.

The judgment was delivered by Justice Arun Mishra, Justice BR Gavai, and Justice Krishna Murari.  The 108-page judgment, written by Justice Mishra, found that 2 tweets by Bhushan do not qualify for the “Freedom of Speech” protected under Article 19(1) of the constitution. The two tweets by Bhushan, which has been removed from Twitter after the apex court’s order, are as following: 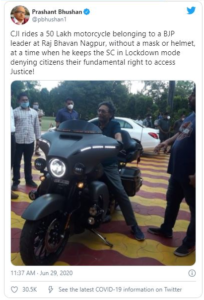 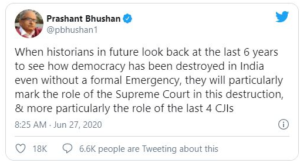 The court has split his first tweet into two parts. The first part being ‘CJI rides a 50 lakh motorcycle belonging to a BJP leader at Raj Bhavan, Nagpur without a mask or helmet,’ which the court ruled that it is made on CJI as an individual and not as the Chief Justice of India, and therefore, is not contempt of court. But, the second part–‘at a time when he keeps the SC in lockdown mode denying citizens their fundamental rights to access justice’– is interpreted as an attack on CJI and institution of the judiciary.

The apex court’s decision against Bhushan is not only an attempt by the Supreme Court of India to quell the disinformation spread by entrenched left-liberal activist lawyers, but, also to put a check on frivolous PIL culture in general. Since provision for Public Interest Litigation was brought into the scenario by the Chief Justice P N Bhagwati in 1986, it has become an instrument of activism for high-profile lawyers like Prashant Bhushan and Indira Jaisingh to stop the executive from implementing desired schemes and policies.

Public Interest Litigation (PIL) was introduced to give marginalized citizens access to justice. But, it has rather become a tool in the hand of politically motivated individuals like Bhushan to carry out their agenda. Therefore, the ruling against Bhushan is not just a judgment on contempt of court, but a message to all high-profile entrenched activist lawyers, too.

Previously, many senior advocates have expressed views against writ petitions, and PILs- many of which slow down the government’s decision-making process and hinder the economic growth of the country. “Article 32 (allowing writ petitions before the SC) must not endeavour to take over government functions, howsoever they may be functioning,” said senior advocate KTS Tulsi.

Therefore, the Bhushan case can be seen as a landmark judgment and could quell the disinformation being spread against the judiciary by the left-liberal establishment since the historic judgment on Ayodhya and Article 370. Bhushan, who criticized the judiciary in both cases, refused to fully accept his mistake in this case and said that he regrets only a part of his statement.

“At the outset, I admit that I did not notice that the bike was on a stand and therefore wearing a helmet was not required. I, therefore, regret that part of my tweet. However, I stand by the remaining part of what I have stated in my tweet…” said Bhushan. So, now the apex court has decided to teach him a lesson by holding him guilty in contempt of court.

Previously, speaking at an event, attorney general KK Venugopal said that the apex court has witnessed an exponential rise in judicial adventurism and that is “due to the introduction of a new remedy called the ‘Public Interest Litigation’, the activism through the judicial review is unparalleled in the judicial history of any modern democracy.”

“It was true that a lot of publicity was attached to PILs and, therefore, many of the PILs which were filed should never have been filed,” added the Attorney General.

People like Prashant Bhushan, the members of so-called civil society, pressurize the government and the judiciary to take certain decisions through PILs. Filing PILs has become a full-time job for lawyers like Bhushan, which earns them bread and butter without any hard work.

There are many legitimate reasons to have a PIL like law, as it makes the government transparent and accountable. But, it also leads to decision paralysis among the government officials and slows down the decision making process. Therefore, some check on the PIL machine has to be there to stop its misuse by the members of the ‘civil society’.

Grand-nephew for CBI, Grand-uncle for alliance – the clever games of the Pawars has left Sena befuddled

Hoping to reclaim their lost vote base, Akali Dal quitting NDA is nothing but a failed political stunt

The fall of the mighty Tatas: How India’s oldest and most respected industrial conglomerate has hit a roadblock