“I have a very satisfactory visit, a very short visit,” Mr Shringla told reporters after the meeting with his counterpart. The foreign secretary promised Bangladesh that the country would get the Covid-19 vaccine on a priority basis once India starts mass production of Oxford Vaccine, which is a global frontrunner in the vaccine race. “When the (COVID) vaccine is developed, friends, partners and neighbours will get it without any saying…for us Bangladesh is always a priority,” Mr Shringla said.

Traditionally, India and Bangladesh maintain close ties, but the inability to finalise a River Teesta water sharing treaty has turned out to be a major obstacle between the bilateral relations of the two countries. However, the issues aren’t related to New Delhi, but the reluctance of West Bengal Chief Minister Mamata Banerjee.

China has successfully used the Teesta logjam to make inroads into Bangladeshi river management projects aimed at maintaining sufficient water levels during dry seasons. As per the Bangladeshi media reports, China is pumping in one billion US Dollars to maintain sufficient water levels during droughts after the Teesta water-sharing treaty dialogue between New Delhi and Dhaka failed miserably.

Jyoti Prosad Ghosh, an Additional Chief Engineer at the Water Development Board, told BenarNews, “A massive project funded by China has been adopted for the management of the Teesta River and China has agreed to fund it. Hopefully, we can start the project by December.”

India, of course, doesn’t want China to spoil New Delhi’s ties with a frontline neighbouring ally like Bangladesh, which is why Shringla was rushed to Dhaka.

Shringla himself exercises a lot of diplomatic influence in Bangladesh, owing to a three-year stint in the country as India’s High Commissioner from 2016-2019. Shringla also maintains a good equation with Sheikh Hasina which is now clearly being put to use.

After rushing to Bangladesh to solve the issue, Shringla is set to visit another ally in the East– Myanmar. The military, as well as the civilian stakeholders of Myanmar, are not happy with China’s financing of separatist activities in regions that share borders with Chinese provinces.

Therefore, the Myanmar government limited the role of China in many major projects such as- Myitsone dam project, Letpadaung copper mine and Kyankpyu port. Apart from that, the government also plans to stop Chinese financing of Yangon city project. The New Yangon City project is an element of the proposed China-Myanmar Economic Corridor (CMEC), which is part of the Belt and Road Initiative (BRI) – Xi Jinping’s flagship Intercontinental infrastructure project.

As per a report by WION, “Myanmar seems to be fairly cautious (about CMEC), learning from past bad experience of $3.6 billion proposed Myitsone Dam project, which got suspended nearly 10 years ago due to strong local opposition and doubts over Chinese infrastructure policy of leading the countries to debt trap.”

China has little respect for the sovereignty of its neighbouring nations. It actively supports terrorist groups that wage war against the government of the neighbouring countries. Even if the Chinese Communist Party has to loot its people to finance terror operations in the neighbouring state, as in Myanmar’s case, it is not going to hesitate. And therefore, countries like Myanmar are willing to dump China’s Belt and Road Initiative and seek closer ties with India. 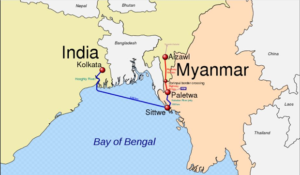 The Myanmar government has thus decided to go ahead with India financed projects including strategically important Kaladan Multi-Modal Transit Transport Project, which will eventually help India to expand its influence in the Bay of Bengal region. The visit of Shringla would help India to accelerate work on India financed projects and further corner China in the neighbouring country. The ace diplomat with decades of experience is capitalizing on his diplomatic skills to bring neighbouring countries in Indian fold.