The price for raising voice against 'the family'

by Abhinav Singh
in Trending

A party that constantly criticizes the ruling BJP party for culling the voice of masses in the country has been proved hypocritical. Congress on Wednesday suspended its rebel Raebareli MLA Aditi Singh from the position of general secretary of the women’s wing of the party, citing “indiscipline”. Aditi was given the stick only a few hours after speaking against Priyanka Gandhi Vadra and her ostentatious yet hollow claims of delivering 1000 buses to the UP government to ferry migrant workers home.

The deplorable Congress party has initiated anti-disciplinary action against her. And therefore it isn’t the least bit of surprise that Aditi Singh had to take the fall for speaking her mind. It is the number one rule of Fight club..err..Congress that nobody talks ill about the party high-command that has a Gandhi surname.

In a series of tweets yesterday, the MLA had lambasted Priyanka Vadra saying “What is the need for such low level of politics at the time of a disaster. A list of one 1,000 buses was sent and more than half of the registration numbers were fake, 297 were junk buses, 98 were autorickshaws, and vehicles like ambulance, 68 vehicles were without any papers. What cruel joke is this?” she tweeted.

Aditi Singh further tore into Priyanka’s highly blasphemous claims by questioning, “If there were buses then why did you not send them to Rajasthan, Punjab, and Maharashtra?”

Terming Priyanka Vadra’s contentious claims as a ‘cruel joke’ on the migrants, Aditi lectured the Indira Gandhi lookalike for making such frivolous statements and engaging in petty politics in the wake of a global pandemic.

Last year, Aditi Singh had attended a special session of the Vidhan Sabha in violation of the party-whip. A complaint against Singh is already pending in the aforementioned case with the Assembly Speaker. The party has now requested for disqualification of her MLA status, according to sources.

Even when the Article 370 was abrogated in Jammu & Kashmir last year, Aditi had gone against the party-line and had supported the decision to scrap special status that was given to Jammu and Kashmir.

Aditi Singh, Congress MLA from Raebareli Sadar on #Article370revoked: I'm in absolute support of the decision taken. It will help in integrating J&K into the mainstream. It's a historic decision. It should not be politicised. As an MLA, in my capacity, I welcome this decision. pic.twitter.com/TZI5VQcrGH

Haryana Police have arrested Congress leader Pankaj Punia, a day after multiple FIRs were filed against him for his abusive rant on Twitter.

In the tweet, the contemptible leader had written “Congress had wanted to run buses to help poor migrants, but the Bisht government started politicising the matter. Only Bhagwa-clad Sanghis can do such lowly activities.” 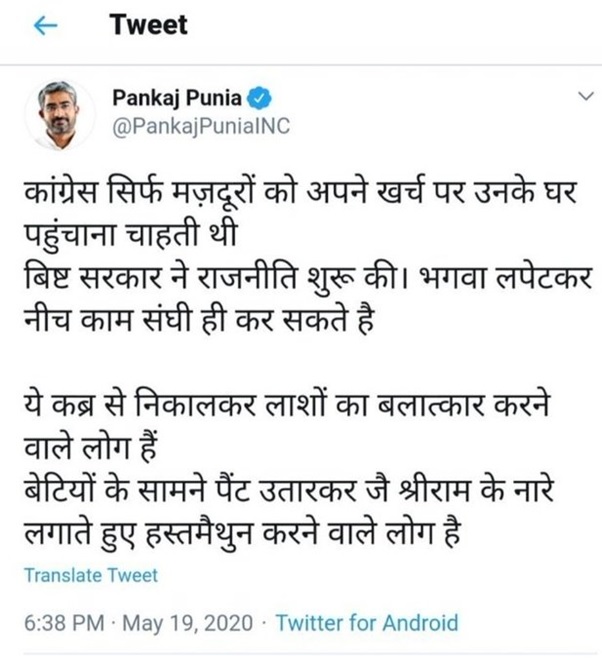 Congress party has gone bonkers after its suicidal PR initiative backfired. It is suspending its MLA, whilst senior leaders are going around spitting venom from their mouths to clean the mess left behind by Priyanka Vadra.

The tragedy of Congress is that the idol-worshipping culture of Gandhi clan instilled in its party-worker would not even allow any cross-questioning to the high-command. And therefore such behavior will go unchecked and once again the Gandhi family will walk away unscathed.

After consuming rats, bats, dogs and pangolins, China is going vegetarian. But that’s a straight-up propaganda