‘Chinese economy has shrunk by 6.8%,’ China registers the worst growth since ‘economic independence’

by Amit Agrahari
in Analysis, Trending
0

China, the country responsible for a halt of economic activity around the world, is itself facing severe problems due to lockdown. In the first quarter of this calendar year, the Chinese economy shrank by 6.8 percent, the biggest contraction since 1976. The Chinese economy has never seen such a phase in the last four decades since it liberalised its economy in the late 1970s, after the death of Communist leader Mao Zedong.

As per data from the National Bureau of Statistics, this is the worst Chinese economy has ever seen in the last few decades. The Bloomberg economist poll predicted a drop of 6 percent, but the final data was scarier. 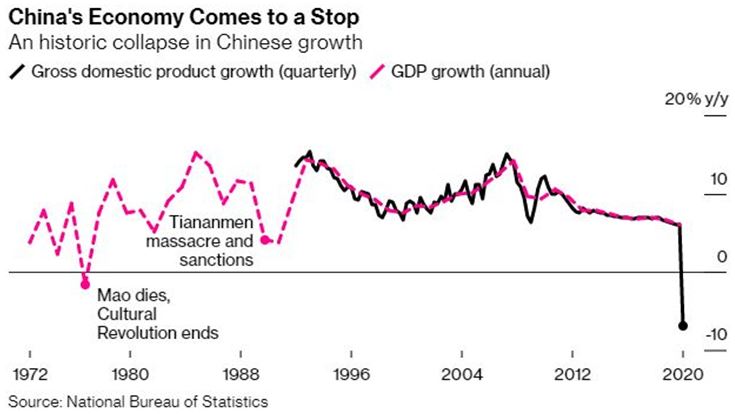 The Chinese economy is battling on almost all front with retail sales- a proxy for consumption- declined by 15.8 percent in March and investment- an indication of future upturn and confidence in the economy- declined by 16.1 percent in the quarter.

The economy is not expected to revive anytime soon as the majority of the countries around the world have extended the lockdowns until the first or second week of May. Given the fact the Chinese economy is heavily dependent on exports and investment, the economy shall not pick up even if the country goes back to normal.

“Most major economies are still in the lockdown stage,” Robin Xing chief China economist at Morgan Stanley Asia, said on Bloomberg TV. “As a result, growth in the second quarter will be shallow, just marginally above zero.”

Only spending by domestic consumers could save the Chinese economy in the short-run but the people are not willing to spend after the Black Swan event of Coronavirus disease, and lockdown. The consumers are worried about the uncertain future and this is stopping them from going out and buying. 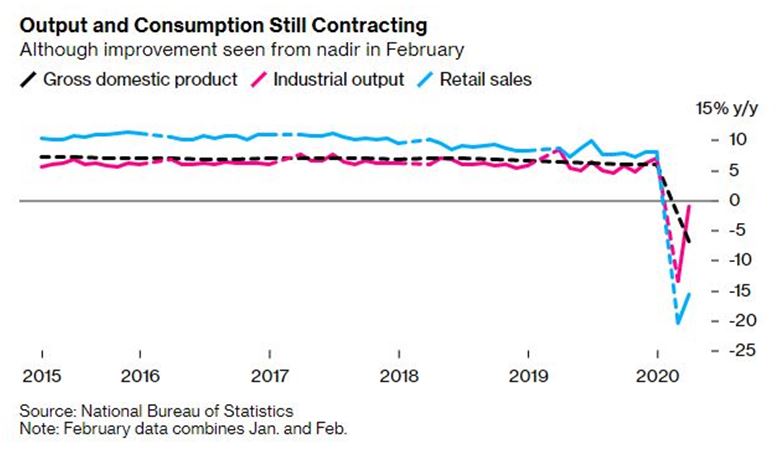 “The March activity data suggest the recovery will be a long haul — especially with the pandemic clobbering external demand. A much narrower decline in production points to strong improvement on the supply side, as our back-to-work gauges have flagged. This partly explains the limited drop in GDP, which is production-based. But foundering retail sales and investment underline continued weaknesses on the demand side,” said Chang Shu, a Bloomberg economist.

Moreover, a second wave of Coronavirus disease has hit China, and the country is reporting these as ‘asymptomatic cases’ to save its credibility (whatever remains) in global media and public opinion.

The migrant workers, who number in million in China just like India, have returned home. The companies are neither paying up to these people nor calling them back for work.  “I have been waiting for my employer to call me back to work in Beijing, but the latest notice was that payment of my basic salary for February had been ‘postponed’,” said Lily Zhu, a migrant worker from the southern province of Hunan, who works as a sales manager at a high-end Beijing restaurant from her hometown. “My salary has stopped, but other payments cannot be stopped, like the mortgage for my flat in Hunan or rent on my flat in Beijing.”

Read More: “Local officials are covering it up,” Chinese people brace for a monstrous second wave, lose trust in CCP

The companies or small businesses are not willing to spend a single dime extra and so does the employees. This has brought the Chinese economy on its knees and, it seems, unless the workers and companies are reassured of a pre-Corona like the normal world, they would not resume economic activity.

Read More: ‘Pack up and get out of there,’ Japan to spend $2.2 billion to get Japanese companies to exit China

Read More: BIG: Hyundai Steel and several other South Korean majors are all set to shut China factories and move to India

The Coronavirus pandemic was China’s own making and it destroyed WHO, too, in the process. The unwillingness to share accurate data, and attempt to suppress information about the outbreak has killed thousands, infected millions, and brought the global economy on its knees. In such a situation, countries which are primarily dependent on domestic consumption, which accounts for two-thirds of their GDP, for economic growth shall remain resilient while countries like China, dependent on foreign investment and exports, are bound to face doom in the current scenario.

There is no going back: Coronavirus will not let the world return to its ways, ever