This small bank is worth more than Punjab National Bank

by Amit Agrahari
in Finance
0

The Indian banking sector is in deep mess. Despite the best efforts of the government, the banking in the country, dominated by public sector, improved only little. Insolvency and Bankruptcy Code (IBC), one of the best resolution and liquidation system set up by any country, has improved the PSBs on Non-performing assets front, but the other metrics of the majority of the public sector banks remain poor.

The reason behind this lacklustre performance of the Indian banking sector is the domination of public sector banks which account for around 70 percent of country’s banking industry. It has been almost five decades since Indira Gandhi nationalized banking in 1969, with the intention to improve lending in ‘strategic areas’, but since then the banking story of the country only got worse.

In the latest economic survey, the policymakers argued that India should have at least 6 banks at top, which we have only one- SBI. Even the countries like Finland, Austria, and Denmark perform better than India. “India’s banks are disproportionately small, compared to the size of its economy. In 2019, when Indian economy is the fifth largest in the world, our highest ranked bank—State Bank of India— is a lowly 55th in the world and is the only bank to be ranked in the Global top 100,” the Survey observed.

The primary reason behind poor performance of Indian banks is the domination of public sector in banking industry. The PSBs are well known for their inefficiency and lethargy. Most of them operate under public pressure and give loan on phone calls. The investor confidence in PSBs is so low that the market capitalization of all PSBs is lower than that of HDFC. A single private sector bank is valued more than all public sector banks of the country.

PNB, being one of the largest and oldest banks in the country, is valued less than small unknown banks, such as AU Small Finance Bank . This is because the investors have no confidence in public sector banks, which always perform poorly; no matter how much time money the government puts in these entities. 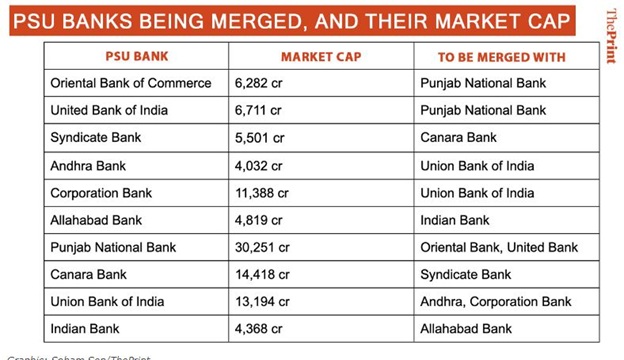 The only solution to improve the banking in the country is privatize all PSBs except a few big ones and better managed like State Bank of India and Bank of Baroda. These PSBs could act hedge in the times of financial crisis, as PSBs make management of financial crisis- regular occurring in any capitalist economy- management easier. If Modi government is serious about improving the banking sector in the country, privatization is only solution.

As financial industry forms basis of any capitalists economy, until and unless the banking improves in the country, double digit economic growth and reaching the target of 5 trillion economy by 2025 is not possible.

‘No country in the world says everybody is welcome,’ Jaishankar blasts the anti-CAA lobby