HOME » Lounge » Cinema » Et Tu Pandita? With ‘Shikara’, Rahul Pandita has stuck a dagger in the back of his own community

Et Tu Pandita? With ‘Shikara’, Rahul Pandita has stuck a dagger in the back of his own community

by Animesh Pandey
in Cinema
1

The recently released film of Vidhu Vinod Chopra, titled ‘Shikara’ was in the news, but for all wrong reasons. The film was allegedly based on the religious persecution of the Kashmiri Pandits. However, the way the ethnic cleansing was portrayed in the movie, it infuriated many Kashmiri Pandits and they criticized the director for playing with their sentiments and romanticizing the genocide, going to the extent of even justifying the radicalization of the Kashmiri Muslims.

In context to the same issue, a debate was organized on Times Now, over the case of a Kashmiri Pandit woman criticizing the misrepresentation of facts in the movie. When the channel consulted the views of Rahul Pandita [who also happens to be the writer of this movie], as to why was the dark reality was not shown in the movie, he bluntly replied, “As a responsible writer, I’ve exercised remarkable restraint and decided not to show events which would start communal violence and riots” –

Before we comment about the issue or the man in question, let us have a look at the background of the writer. Rahul Pandita is a popular writer, who is known for accomplished works like ‘Our Moon has Blood Clots’, based on his own sufferings as a Kashmiri Pandit, apart from writing several articles and books on the political environment of India.

However, the way Rahul Pandita has chosen to selectively portray the sufferings of his own community, apart from the fact that he even tried to romanticise the rampant terrorism in the valley, apart from demonizing the soldiers stationed there, it is clear beyond doubt that for Rahul Pandita, pseudo-secularism still reigns. His rabid hatred for the cause of Hindutva comes first, and justice for the Kashmiri Pandits count little in his scheme of things.

However, we forget that this is the same Rahul Pandita, for whom the abrogation of the Article 370 is an excessive measure by the Central Government, and for whom the Muslim victims of the Gujarat violence of 2002 are as much a victim as the Kashmiri Pandits. One user on Twitter said it aptly, “What did you expect in Shikara from a person who has such posts on his FB profile?” – 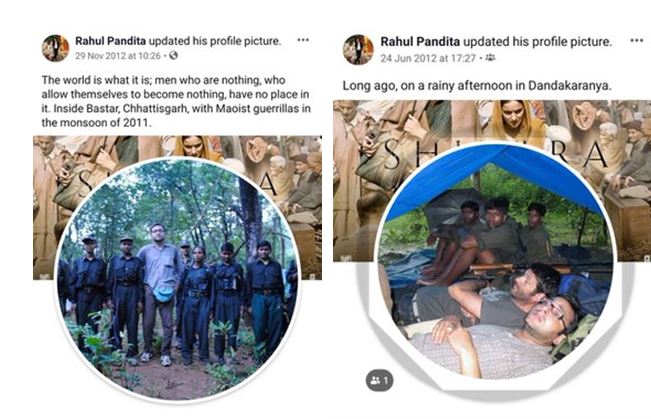 Now how much can we blame Rahul Pandita, when the director himself has no sympathy for his own folk? The way Vidhu Vinod Chopra mocked the agony of a Kashmiri Pandit woman, who was distraught by ‘Shikara’, would make anyone cringe in disgust. To make matters worse, Vidhu Vinod Chopra started taunting the woman by remarking, “We would make Shikara 2” for you.

Of course, how can we forget the way he mocked the genocide, despite his own mother being a victim of the same. To quote Vidhu’s observations, “This film is about healing, this is about coming other. This film is about the fact that it has been more than 30 years about this tragedy. We should say sorry, and move on. This is like when two friends have a little fallout and after 30 years, they say forget this. They say sorry to each other and hug each other.”

To be honest, Rahul Pandita has mocked the sufferings of his own community with ‘Shikara’. The way he has justified the criminal omissions from the plotline, it goes on to prove as to how much he really cares about his community. The way Rahul Pandita has compromised with the facts; there is no doubt about the fact that Rahul Pandita is a sheer disgrace to the entire Kashmiri Pandit community.

All ‘casteist’ and ‘secular’ parties are asking for caste census: The aim is to weaken Hindu unity

Freebies win, Shaheen Bagh bears fruit for AAP: The Exit Polls give out their verdict