But how long can they fight

In the last few years, Modi government has repeatedly pitched the idea of One Nation, One Poll. BJP, as a party, remains committed to simultaneous elections in the country, and even a few Congress leaders have pitched the idea. Except for the regional parties, most of the national parties remain committed to minimizing the time and money spent on polls by conducting national and state polls together; or by fixing the term limit; or through some other hybrid means. The broad consensus around the idea has a positive tone.

Even in the think tanks, the idea is quite popular and it is getting good attention from policy wonks. In fact, NITI Aayog, the government think tank, published a paper by Bibek Debroy, Chairman of the Economic Advisory Council, and Kishore Desai, which conservatively concluded in the support of One Nation, One Poll.

But the media, which often calls itself the fourth pillar of democracy, has outrightly rejected the idea. The print media published some articles by scholars in support of the simultaneous elections, but the electronic media has always been opposed to the idea.

This outspoken stance of media against the One Nation, One Poll raises the question- Why the Indian Media, which never forgets to remind us about its objectivity, has been so much opposed to the idea of minimizing the election time and spending.

If we analyze the impact of the One Nation, One Poll agenda on the governance and polity, by and large every person and organization has written in its support, and therefore, it is expected from media to push the agenda and manufacture a consensus around it; like it did for GST. But so far, the media’s tone over the idea has been negative. 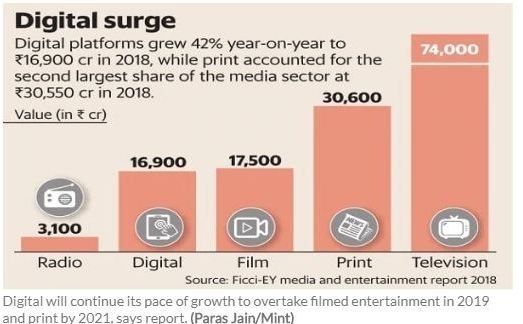 To understand why the media is opposed to One Nation, One Poll, one must understand the ‘media economics’. The combined television news, print, digital, and radio is worth less than 1 lakh crore or 0.5 percent of country’s GDP, but they are extremely influential in shaping the politics and polity of the country; and building consensus around any idea or policy.

The revenue and TRP (Television Rating Points) of electronic media primarily comes from the advertisement of government programs. The party advertisements awarded by National parties to the TV media also accounts for significant proportion of electronic as well as print media.

The Television viewership of news media rises significantly during the elections; as election gives content for weeks. The party campaign, leader interviews, pre-poll surveys, exit poll, election results, and electoral debates; the media gets content of weeks due to elections. They are also directly or indirectly funded by political parties for positive coverage of its policies and agenda. The parties give advertisement to the media to print or show the party’s electoral campaign and promises.

The influence of the media is because the country is in election mode throughout the year. Once the simultaneous elections or the One Nation, One Poll is implemented; the influence of media will be minimal on the politics of the country; and the funding by the political parties will also end.

Deepak Chaurasia was manhandled at an Anti-CAA protest. The worst part – liberals are defending it

‘Boycott China’ has become a company-led movement around the world. No need for govts to kick China out

In the wake of growing Chinese belligerence, Japanese PM Suga decides to have the biggest defence budget ever

Russia’s ‘undesirable government’ remark was meant for China and not US. Dear global media, you have failed again