Dear Supreme Court, hope you are watching this

P Chidambaram, country’s first Finance Minister who went to jail on charges of corruption, has resumed his weekly columns in various Indian newspapers. He informed the Twitter audience about the same in a tweet.

“Beginning today, I have resumed my column ‘Across the Aisle’ in the Indian Express and in 10 Indian languages,” tweeted Chidambaram.

Beginning today, I have resumed my column 'Across the Aisle' in the Indian Express and in 10 Indian languages.

To which, another user who goes with the name- Prakash Belwade Patil, replied- “Write article about- “How you made money and skilled your son also.” This trick may help others. @supriya_sule Tai also taught us how to make money from Baingan cultivation in 10 acres land.”

Write article about- “How you made money and skilled your son also”
This trick may help others. @supriya_sule Tai also taught us how to make money from Baingan cultivation in 10 acres land.

Write article about- “How you made money and skilled your son also”
This trick may help others. @supriya_sule Tai also taught us how to make money from Baingan cultivation in 10 acres land.

Karti Chidambaram, son of P Chidambaram, who is also an MP from Sivaganga constituency, was infuriated by a commoner’s reply to his father. He directly messaged the person and said, “I am told you want my advice. Please come to my office.” 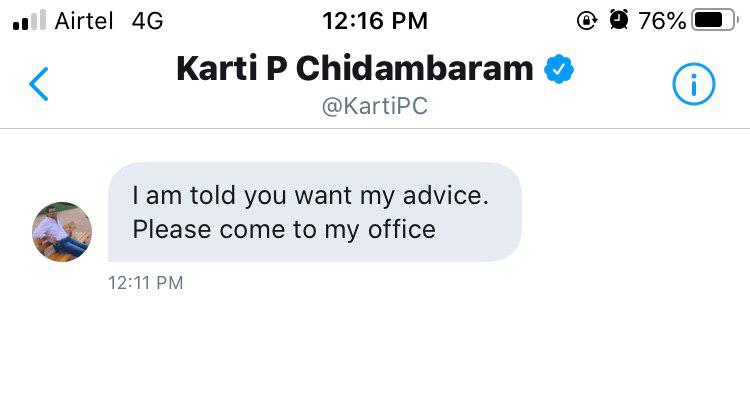 This is a clear cut case of threatening a commoner who is brave enough to call out the corruption by Chidambaram family. The Chidambaram family is among the most corrupt political families of the country, with illegal assets in 14 countries.

Chidambaram and his son Karti Chidambaram were under the scanner of the CBI and the ED since last year in connection with the Foreign Investment Promotion Board (FIPB) clearance granted to INX Media. The alleged irregularities had taken place in 2007 when P. Chidambaram was the Finance Minister under the UPA government. The CBI had registered an FIR into this case on May 15, 2017, against alleged irregularities in the FIPB clearance to INX Media.

Indrani led INX Media wanted foreign investments in the company to expand its business of a series of television channels in India. The company approached FIPB to seek approval regarding issuing equity shares to Mauritius based NRI investors through the FDI route. FIPB approved FDI investment worth just 4.62 crores but INX Media generated investment worth 305 crore rupees “by issuing shares to foreign investors at a premium of more than Rs 800 per share” between August 2007 and May 2008, as per the FIR in the case.

P Chidambaram who was the then finance minister met with Indrani and agreed to give ‘retrospective approval’ of downstream investment of more than 300 crore rupees in exchange of 5 crore rupees ‘investment’ in his son’s firm. That’s what sealed P Chidambaram’s fate.

The case was unearthed by ED’s Investigating Officer Rajeshwar Singh when he conducted raids at Chidambaram’s home and his son’s firm in connection with Aircel-Maxis probe in December 2014.

Karti Chidambaram was also arrested by the investigation agencies in February 2018. P Chidambaram is the first finance minister of India to face probe in financial irregularity by any investigation agencies. He certainly comes across as a disgrace to the sanctity to the post of finance minister. There could not be anything worse than a country’s finance minister to be involved in a finance-related crime. He is also involved in many other illegalities including changing the affidavit in the Ishrat Jahan encounter, creating the myth of saffron terror, Aircel Maxis scam and 2G scam.

The threats to a commoner by the Karti Chidambaram has exposed the hypocrisy of the left-liberal establishment, which takes the ‘high moral ground’ in public, be it on women empowerment, eve-teasing, transparency in businesses, a crackdown on black money so on and so forth. But when it comes to adhering to these principals in personal life or office environment, they violate almost every rule of these principals.

A convict like Chidambaram getting space on the editorial pages of the prominent newspapers like Indian Express and many other regional newspapers, tells us about the sad state of Indian media.

The high moral ground taken by the left-liberal media establishment remains in front of the camera. In backrooms, they behave as tax evaders, money launderers, sexual predators, sycophants and what not. This establishment is responsible for informing the public, and in creating the public good, they must shed their biases and their personal dealings. The interesting thing is they cry foul and ‘political witch hunt’ when some legal action is taken against them. The establishment pleads for freedom of the press whenever their corporate wrongdoing is exposed but it is difficult to expect objectivity from these tainted media houses.

Devdutt Pattanaik was flaunting his gyan on Twitter. TrueIndology destroyed him with undeniable facts