Talk about bad Return on Investment

As the Modi government implemented the Citizenship (Amendment) Act, the most vociferous protest against the law was led by students in two minority institutions, namely, Aligarh Muslim University (AMU) and Jamia Milia Islamia (National Muslim University). At both universities, the police was forced to enter campus to control the situation, as the students allegedly resorted to pelting stones and waved country made guns (at AMU) at the law enforcement agency.

Considering the fact that AMU is currently in the news, it is right time to discuss the following: What is the return of investment (ROI) of funding these minority institutions, which reserve more than 50 percent seats for the minority community, and what is the contribution of these institutions, if any.

In the FY 18, as per the UGC annual report, the total spending on 41 central universities was 7,315 crore rupees. Among these central universities, there are institutions like- AMU, JMI, JNU, Hyderabad Central University, BHU- and many other institutions, especially focused on master’s education in the humanities and social sciences stream.

Of the 7,315 crore rupees in central universities budget, 1,115 crore rupees or 15.25 percent to the total spending, went to Aligarh Muslim University. In addition to this, there are various grants from the central government to set up chair, build hostels, and other university infrastructure. The research scholars are also granted Junior Research Fellowship/Senior Research fellowship, and research grants.

As per the AMU website, there are 12,000 residential students in the university and the total number of the students is 28,000. If we divide the annual grant to the university with the total number of students, it translates into expenditure of 4 lakh rupees per student. All the other grants and fellowships put aside, the central government spends 4 lakh rupees per student per year.

AMU and its Hindu counterpart, BHU, were the institutions which have the protection of British, and therefore they flourished under the British India. In fact, Muhammadan Anglo Oriental College- the predecessor of AMU- was established in 1875 by Syed Ahmed Khan with the sole aim to prepare the Muslims to serve the Imperial Civil Services (ICS). Khan argued that Muslims should co-operate with the British Empire, rather than fighting them tooth and nail.

AMU was instrumental in pushing for the ‘idea of Pakistan’. In fact, the role of AMU in Pakistan movement was so instrumental that Jinnah once famously called AMU, “the arsenal of Muslim India”. The portrait of the Qaid-i-Azam Mohammad Ali Jinnah still hangs on the walls of JNU.

Almost all the prominent leaders of the independent Pakistan, including first Prime Minister Liaquat Ali Khan and first native Commander-in-Chief of the Pakistan Army, and second President Ayub Khan were educated at AMU. If there is a single person and a single institution which could be blamed for the partition- It is AMU and Sir Syed Ahmed Khan.

With the partition, the sole aim of AMU was achieved but, the liberal Prime Minister of India, Jawaharlal Nehru, decided to continue with the university. In fact, Jawaharlal Nehru Medical College and Hospital was established later in 1962 as a part of the university, and the grants from the central government increased substantially.

“The number of students began to fall heavily, and despite the arrival of refugees from Pakistan, the fall in numbers continued,” writes academic Shamin Akhtar. “Thus, Aligarh’s response to the Pakistan movement needs to be viewed in an all-India perspective, and its reasons must be located in the convergence of a wide range of factors which made the resolution of communal differences increasingly difficult,” writes Mushirul Hasan.

In return to generosity of the central government in post-partition period, the university has become the hub of anti-national activities. In late 70s, just three decades after partition, Students’ Islamic Movement of India (SIMI) was started by the students of AMU (the head founding being a Ph.D student from the university) with the aim to make India dar al-islam (lit. territory of Islam).

Indian Mujahedeen (IM), the militant wing of SIMI, with the motto to create an “Islamic Caliphate” across South Asia, has been involved in bombings and serial blasts across the country. Starting from 2007, IN carried out terrorist attacks in various Indian cities, namely- Jaipur, Bangalore, Ahmedabad, Delhi, Pune, Varanasi, Mumbai, and Bodh Gaya. In September 2008, Batla House encounter was carried out to neutralize the terrorists of IM. Popular Front of India (PFI), a resurgent Islamist group with activists across the country, lists former SIMI members as its top commander.

The university has become a breeding ground for terrorists. During the anti-CAA protest, when the police entered the university on the provocation of the students (as evident in many videos), the students furled country made rifles at them. A student, who lost his hand in an attempt to throw bomb at the police, has been offered the post of assistant professor by the university administration.

If the reader wishes to read more about the extent of anti-national activities in AMU, just Google- AMU and terrorism, and you will find plethora of news reports about the involvement of AMU students in the terrorist activities, and rallies, social media reports, in support of terrorist and their activities. The links of two such articles are given below: 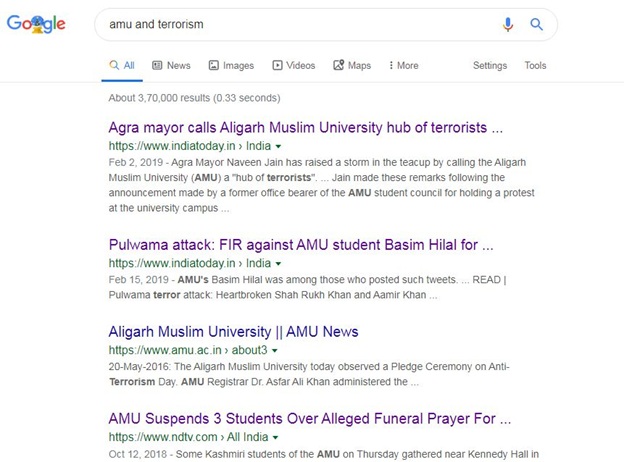 It is true that one cannot blame the whole university for the activities of few students, but, whenever a case about “highly educated terrorist” peeps, the probability of the person belonging to AMU is very high.

The return on investment (ROI) on the spending on AMU is very low compared to other central government funded institutions. The university has put no data about the placement of the students, despite the fact that it has an engineering and technology department- Zakir Husain College of Engineering and Technology, where the placement factor is considered very crucial.

The grant to IITs, IIMs, NITs, law colleges is considerably lower when compared to more 1,100 crore rupees to Aligarh Muslim University, but these institutions have contributed to nation building by producing alumni who highly productive, on the other hand, the university in Aligarh first contributed to the partition of the country, and now it has become breeding ground for terrorists.

German studying in IIT Madras went out to protest against CAA, got sent back in the next flight to Germany

Planning to buy a Chinese smartphone? Think again. They could be Modi govt’s next target and for good reason

Indian Navy rejects HAL choppers: HAL has failed the Indian Armed Forces and must be shut down