Newswire
Remarkable meat-eating dinosaur species found in US 1 hour ago
None allowed to take law in their hands: J’khand Guv 2 hours ago
Coronavirus: Two more cases suspected in Nepal 2 hours ago
Congress rakes up CAA on Republic Day 2 hours ago
Afghan politicians meet to discuss peace process 2 hours ago
DDCA elated as Arun Jaitley gets Padma Vibushan 2 hours ago
Next
Prev

TATA’s web of ‘not-for-profits’ for evading taxes has left the government very upset. A big fine is on its way

The Income Tax Department has delivered a 12,000 crore rupees blow to Tata Trusts, as the government authority has cancelled the registration of six Tata Trusts. The Tata Trusts are the largest shareholder (66 percent) in Tata Sons, the holding company of Tata Group, the conglomerate which posted 110 billion dollars revenue in last year.

Why the government cancelled registration of Tata Trusts

According to The Hindu BusinessLine, six Tata Trusts-Jamsetji Tata Trust, RD Tata Trust, Tata Education Trust, Tata Social Welfare Trust, Sarvajanik Seva Trust and Navajbai Ratan Tata Trust, were registered in mid 1970s, when Indira Gandhi’s tax terrorism was going on in full swing. As per Section 11 and 12 of the Income Tax Act, Trusts and Societies are provided Income Tax exemptions as long as they are not involved in ‘prohibited activities’.

As per the website of the group, 66 percent of Tata Sons is owned by trusts which ‘promote education, health, culture, and livelihood initiatives in India’. But, the Comptroller and Auditor General of India found that the company had invested 3,139 crore rupees in ‘prohibited modes of investment’, and this resulted in loss of 1,066 crore rupees to exchequer. Investment with the aim to make profit is prohibited in for trusts and societies, but, the Tata Trusts did the same.

Response of Tata after CAG Report

In March 2015, the Tata Trusts moved to Tax department to surrender registrations (under Section 12AA of the I-T Act) and admitted that given the nature of investments by trusts and its assets, they cannot seek exemption. The matter was transferred to sub-panel of Public Accounts Committee (PAC) of Parliament in 2018, which noted that, the Trusts were investing in prohibited modes of investment since 1973.

According to Tata Trusts, they surrendered the exemption claims back in 2015 and therefore the cancellation should take place from that year. In this case, the group would not have to pay on the income made between FY 16 to FY 18.

The statement said, ‘’The decision to surrender the registration (an option available in law) was taken in the best interests of the Trust, and to maximise the resources available to the Trust for their charitable work, which is the principal object and focus of the Trusts.’’ It further said, ‘’While the Tax Departm­ent’s order has cancelled the Trusts’ registration with immediate effect, we believe that as a matter of law and consistent with the Department’s own decision in the past, the cancellation should take effect from 2015, when the registrations were surrendered and the Trusts themselves consented to cancellation.’’ 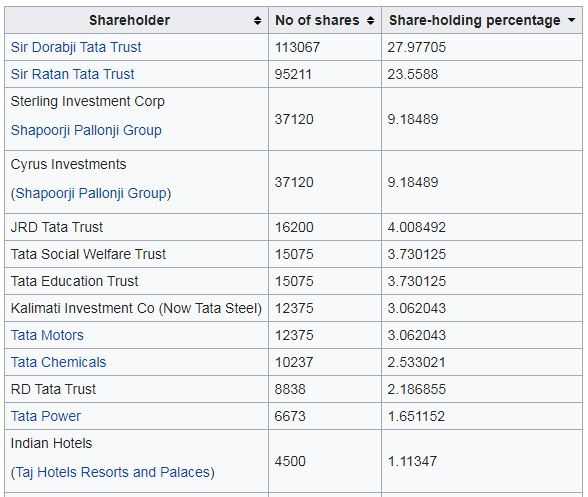 According to some reports, Cyrus Mistry, whose family holds 18 percent share in Tata Sons (second largest after Tata Trusts- 66 percent), was instrumental in getting the Tata’s caught red handed. He provided the I-T department plethora of documents to prove that Tatas are saving tax through illegal means. Mistry was Chairman of Tata group from 2012 to 2016 and was ousted from the group after a public spat with Ratan Tata, the Chairman of the group before Mistry (1991-2012) and, a scion on Tata family.

How the Tata Group masked itself

Since Ratan Tata took over the group in early 1990s, the group has also been involved in many corruption controversies like 2G scam, Air Asia scam, the Vistara partnership and the Jaguar deal. Tata is among the most trusted institutions in the country. The group often brands itself as ‘human face of industry’, the corruption and tax evasion will definitely erode the public trust enjoyed by Tatas.

Congress ‘mentally’ removed Art 370 a dozen times without hurting people. Not our claim, Their claim.

Because motorists are not always at fault - After the Motor Vehicles Act, India needs a Pedestrian act