Statue of Unity, the 182 metres tall marvelous structure, has often been severely criticized by left-liberal intelligentsia of the country. Absurd arguments like, the money spent on Statue of Unity could have been used to build hospitals, and schools have been put forward time and again.

According to a report published in 2016, the Taj Mahal earned Rs 75 crores in the previous three years in revenues through sale of tickets and other paid services. But, as per latest report about the revenue from Statue of Unity, the statue of Sardar Patel has been visited by 26 lakh tourists and earned 71.66 crore rupees in the first eleven months. The statue cost 3,000 crore rupees, and at this rate of revenue, the project would take less than 50 years to recover the amount. 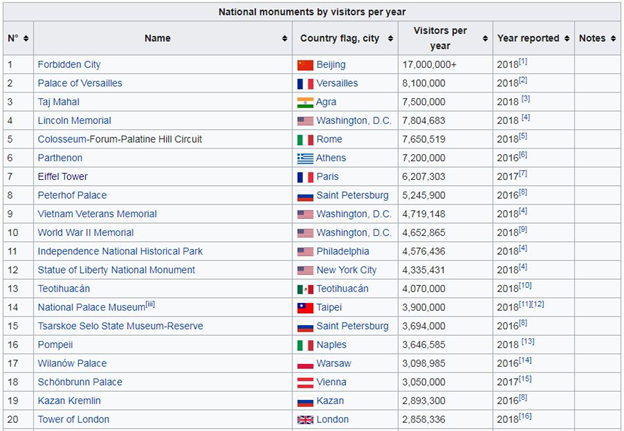 The statue is already among the top 25 most visited places in the world. Moscow’s Kremlin, 25th most visited place in the world, received 2.47 million tourists in 2018 while the Statue of Unity has already been visited by more than 2.6 million people in the first eleven months. By the completion of one year of opening of the structure to public, the monument is expected to surpass Tower of London which received 2.85 million tourists in 2018.

Currently, Tower of London, the beautiful structure in the great city of London, which has symbolized the power and global stature of the city is the 20th most visited monument and the Statue of Unity is expected to dethrone it when the data for the whole year will be released. Sardar Patel Rashtriya Ekta Trust, the managing organization of the structure will release the one year data very soon, as the structure had completed one year of public opening in October end. It was opened in last year on Sardar Patel’s birthday, i.e., 31st October.

The statue stands 182 meters tall, more than 100 times the height of an average human being, it is almost double the famous ‘Statue of liberty’ of United States and 54 metres more than Spring Temple Buddha, the second tallest structure in the world located in China. The ‘Statue of Unity’ is dedicated to Sardar Patel, famously known as ‘Iron Man of India’ and credited for uniting a country the size of a subcontinent. The huge number of visitors shows both the affection of the people of the country for Sardar Patel and the beauty of the marvelous structure.

Gujarat already has two major tourist attractions, Gandhi circuit and the Great Rann of Kutch and the state economy and tourism industry is all set to receive a huge boost with the ‘Statue of Unity’. The statue is located in Narmada district in western Gujarat, 200 km from Ahmedabad. The area of western Gujarat is also near to Greater Mumbai and Nashik region which are among the richest regions of the country. Hence, the sight will attract affluent visitors from the cities like Ahmedabad, Surat, Mumbai and Nashik.

The surroundings of the statue are some beautiful locations like valley of flowers, Vindhaychal and Satpura hill ranges, and the mighty Sardar Sarovar dam, on the banks of Narmada River, which is among largest dams in the world. The ticket price has been kept in affordable range with 120 rupees for regular entry tickets for adults and 60 for kids 3-15 years. If one wishes to enjoy a view from the height of 400 feet from the chest of Sardar Patel, he/she must pay 350 rupees. The statue of Sardar Patel, one of the founding fathers of modern India will boost the economy of the state of Gujarat along with a permanent establishment to the legacy of Sardar Patel.

How media turned 1.33 Cr Ayodhya Deepotsav to a 133 Cr extravaganza and tried to send us on a guilt trip

Dada and Dravid unite to turn NCA into a center of excellence, a terrific news for budding cricketers