Statue of Unity, a major Hit !

Statue of Unity, world’s tallest statue has received 1.28 lakh tourists in first eleven days of opening. The 182 meter statue of Sardar Vallabhbhai Patel has catalyzed tourism industry in the region. In last weekend, the total number of visitors exceeded 50,000 with more than 27,000 on Saturday and 24,000 on Sunday. Sardar Patel Rashtriya Ekta Trust, the managing organization of the structure earned more than 2.1 crores in first 10 days of opening of structure, with more than 1 lakh visitors. 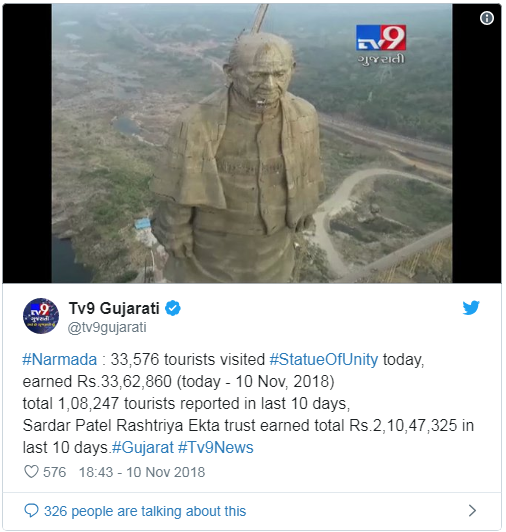 If visitor’s spending continues to grow at this rate, the statue will soon recover the cost of construction. The statue is a symbol of the growing importance of India on the global stage and its exponentially growing economy. It is designed by Ram V Sutar, an Indian sculptor who has designed more than 50 sculptures in last forty years of his career and has been awarded with Padma Bhushan and Padma Shree for his contributions in the field.

The statue stands 182 meters tall, more than thirty times to the height of an average human being, it is almost double the famous ‘Statue of liberty’ of United States and 54 meters more than Spring Temple Buddha, the second tallest structure in the world located in China. The ‘Statue of Unity’ is dedicated to Sardar Patel, famously known as ‘Iron man of India’ and credited for uniting a country the size of a subcontinent. The huge number of visitors shows both the affection of the people of the country for Sardar Patel and the beauty of the marvelous structure.  “Since November 1, when the statue opened for the public, we have received around 1.28 lakh tourists (till Sunday),” Superintending Engineer of Sardar Sarovar Narmada Nigam Ltd (SSNNL) R G Kanungo said.

The statue is built with investment of 3,000 crore and expects on average 15,000 visitors per day with high density on weekends. Gujarat already has two major tourist attractions, Gandhi circuit and Great Rann of Kutch the state economy and tourism industry is all set to receive a huge boost with the ‘Statue of Unity’. The statue is located in Narmada district in western Gujarat, 200 km from Ahmedabad. The area of western Gujarat is also near to Greater Mumbai and Nashik region which are among the richest regions of the country. Hence, the sight will attract affluent visitors from the cities like Ahmedabad, Surat, Mumbai and Nashik. The surroundings of the statue are some beautiful locations like valley of flowers, Vindhaychal and Satpura hill ranges, and the mighty Sardar Sarovar dam, on the banks of Narmada River, which is among largest dams in the world. The ticket price has been kept in affordable range with 120 rupees for regular entry tickets for adults and 60 for kids 3-15 years. If one wishes to enjoy a view from the height of 400 feet from the chest of Sardar Patel, he/she must pay 350 rupees. The statue of Sardar Patel, one of the founding fathers of modern India will boost the economy of the state of Gujarat along with a permanent establishment to the legacy of Sardar Patel.

A tribute to BJP’s prominent face from South, Ananth Kumar

Voters defy Naxals with huge turn out in Chhattisgarh