Newswire
Mallya to be flown, lodged in Mumbai on extradition 32 mins ago
Shastri shares clip of Cyclone Nisarga causing havoc in Alibag 37 mins ago
Only 2 pc of those returned to Bihar contracted virus: Punjab govt 37 mins ago
Malaika shares her ‘various stages of lockdown’ 53 mins ago
Pitch could be prepared in a way to help maintain balance, says Kumble 54 mins ago
Bihar migrants were in great distress: Nitish 54 mins ago
Next
Prev

Mahima Kukreja, the woman whose story started the MeToo movement in India turns out to be a fake

by Mahima Pandey
in Trending

Last year, the #MeToo movement had taken the entire country by storm. There were several shocking allegations made across all walks of life and no one including Bollywood stars, comedians, etc. remained unaffected by it. Several big names came up even as women recounted instances of sheer harassment that they had to face in their lives. One of such names is Utsav Chakraborty, a former AIB member against whom allegations were made by Mahima Kukreja under the #MeToo movement. She had posted a Twitter thread making allegations against the former AIB member. However, now an audio clip is going viral on social media which narrates a completely different story. 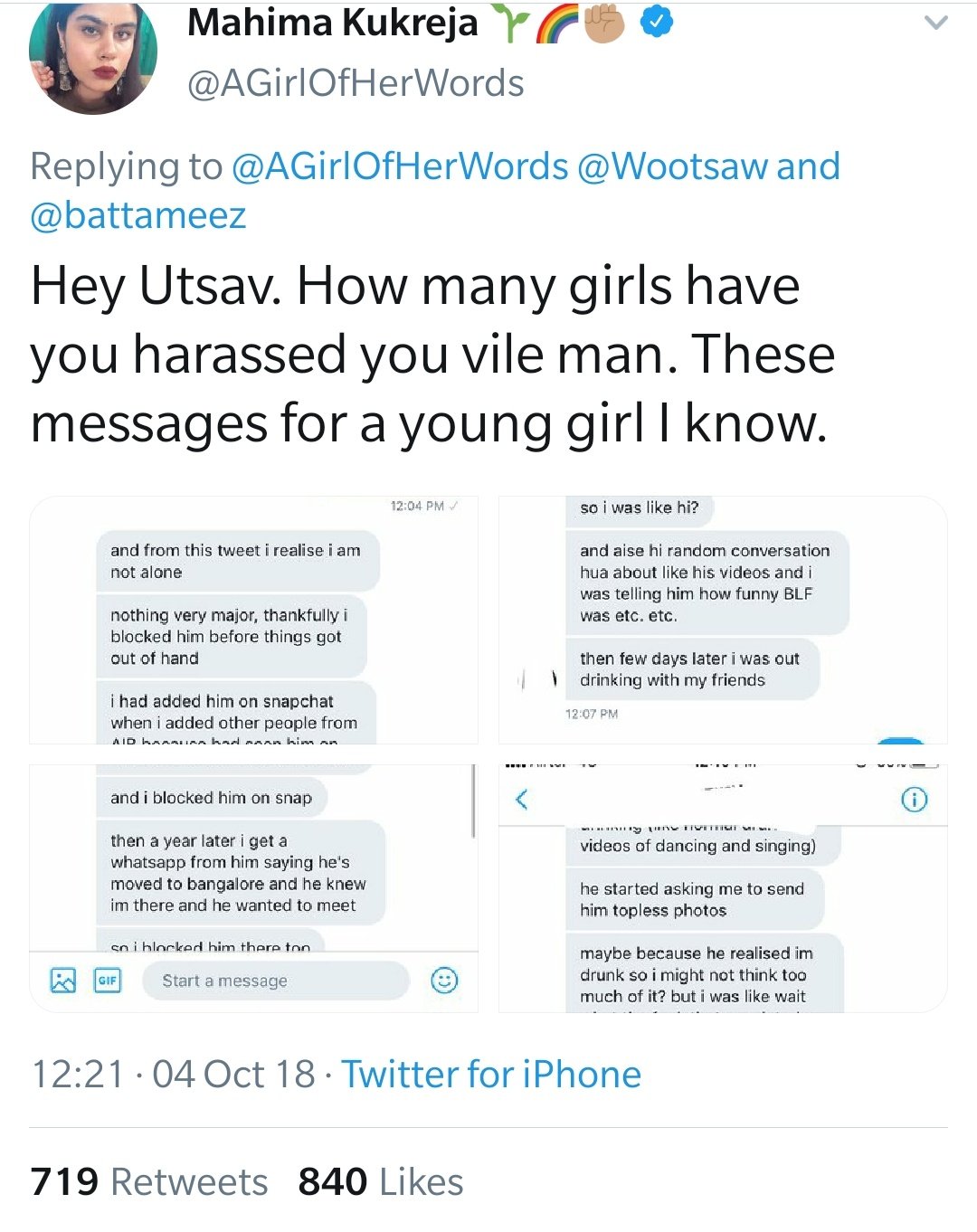 A major twist in the allegations involving Utsav Chakraborty has come after Sourav Ghosh, a stand up comedian took to Twitter and posted an audio clip in which Mahima Kukreja’s lawyer can be heard threatening Utsav Chakraborty. Ghosh has tweeted, “Utsav just got in touch with me. I like others in the community had abandoned him believing whatever @AGirlOfHerWords had to say but wtf is this? Why is her lawyer threatning him to hide his side? Let’s not be quiet on this and have a spine here.”

Utsav just got in touch with me. I like others in the community had abandoned him believing whatever @AGirlOfHerWords had to say but wtf is this? Why is her lawyer threatning him to hide his side? Let's not be quiet on this and have a spine here.https://t.co/AuBazeFBPB

In the audio clip that Ghosh has shared, Mahima Kukreja’s lawyer can be heard saying, “I am Mahima Kukreja’s lawyer, I have come to know that you are planning to put some proofs in the public domain. As of now, she is in contact with the Mumbai Police and the National Commission for Women, but owing to mental issues she does not want to go ahead with the matter. There are several other reasons also. If you put any proofs without permission, then it will only create problems for you.”

Thereafter, Utsav Chakraborty can be heard saying, “She (Mahima Kukreja) shared screenshots on social media without any prior verification, because of which my career got destroyed and even my friends and relatives don’t want to listen to me now and no one wants to remain in touch with me either.” To this the lawyer warned him of dire consequences if he shared anything in public domain and asked him for a public apology. However, Utsav remained adamant in the audio clip and said, “Why should I apologise. It is Mahima who should apologise for destroying my career.”

In a conversation with Utsav, it has now been revealed that the audio clip that has gone viral is actually just a part of the entire conversation that went upto an hour. He said, “I have been sending out these recordings to my friends and people in my close circle since December 2018. The whole time no one would believe whatever I said. The genesis of this audio is that I had told someone I trusted that I have collected information on the anonymous allegations that she (the woman) has put up. But this person went ahead and told the other party and three minutes later I get this call that went on for nearly an hour. This clip is only a part of the entire conversation. I’m not sure who has the clippings, and it’s not like I’m not grateful, it’s good.”

Utsav has also claimed that he never even met the one who made the allegations against him and named and shamed him under the #MeToo movement. He said, “The most incredible part is that to this date I have never met this woman in person. We have talked online thrice, on DMs between 2014 to 2016 and after that a bit.”

The former comedian at the AIB also took to Twitter giving a justification of every allegation levelled against him. He tweeted,  “Why would so many women lie about one person? In the next few tweets, I will tackle all the malicious insinuations and abject falsehoods put forth on me either by @AGirlOfHerWords or the media frenzy that followed. Stay tuned.”

"Why would so many women lie about one person?"

In the next few tweets, I will tackle all the malicious insinuations and abject falsehoods put forth on me either by @AGirlOfHerWords or the media frenzy that followed. Stay tuned.

In the entire Twitter thread that follows, Utsav Chakraborty has given details of how untruthful allegations were made based on half-baked information and manipulations. Utsav Chakraborty has also claimed that he never shared any obscene images with any woman. These revelations have surprised everyone. This case had posed several questions against the AIB and had also created a furore against Utsav Chakraborty. At that time, no one could have thought that this incident will take such a major U-turn.

And before I begin, I would like to put out a public service announcement to anyone who approached Mahima Kukreja with false or malicious information about me. If you did this, please apologize or at least explain yourself publicly as to why you did what you did.

You guys remember this screenshot? It was posted by this guy called @sanilgosavi, got a tonne of retweets and basically showed how deplorable and unrelenting a creep I was. So convincing that when I first saw it, I believed it myself. Not gonna lie. pic.twitter.com/jk8hynAkZK

But when I looked into it further it was clear as day. One half of the conversation was missing. What sorcery was this??!

Turns out Instagram DMs have a fun feature where you can delete your side of the convo making the other person look like a complete psycho creep. pic.twitter.com/Gr6J2pIq3Z

And how young was @kanikakaul22?

She turned 27 last year and is a straight up married woman.

So she's a sum total of ONE year younger than me. Don't be fooled by the 22 in her handle. pic.twitter.com/vD6SnIU6CZ

An exclusive in-group of ex-Buzzfeed writers, expats and artists. People with 'online-cred' basically. For the past year or so, this privileged cabal of cool has been regurgitating Mahima and Kanika's baseless words in private and public circles. Even furthering my decimation. pic.twitter.com/WVDsQxl3FX

Though Mahima Kukreja’s lawyer has claimed that her client is mentally imbalanced, this case really brings to light how false allegations and vindictive complaints can wreck havoc on an innocent person’s career. Utsav Chakraborty is a big example of this issue.

It is shocking that while the audio clip is trending on Twitter, the mainstream media has failed to take up the matter. Utsav Chakraborty’s case really highlights the issue of potential misuse of laws which are supposed to further the cause of women empowerment. However, the mainstream media remains hesitant to highlight this issue which has taken the social media by storm.

It is because of such cases and improper use of laws relating to sexual harassment that even the genuine cases relating to such heinous acts do not get the kind of serious attention from the society that such cases deserve. As one of the Twitter users pointed out, “So shocked to learn that Mahima Kukreja first placed flimsy #MeToo allegations against Utsav and then her lawyer intimidated him to make sure that he doesnt share ss that prove his innocence. Very pathetic to indulge in such behaviour. This makes it difficult for genuine victims.”

So shocked to learn that Mahima Kukreja first placed flimsy #MeToo allegations against Utsav and then her lawyer intimidated him to make sure that he doesnt share ss that prove his innocence. Very pathetic to indulge in such behaviour. This makes it difficult for genuine victims.

But if he has the chance to prove his innocence by exposing her, she pays the victim card & threatens him

We talk about equality yet we give a license by the name of a victim card exclusively to a woman who can anyday use it as veto and we will not point fingers at her.
Very sad. This powerful campaign has been brought to suspicion after listening to @Wootsaw #MeToo https://t.co/ShGC7Jy1xj

Utsav Chakraborty has set a big example by revealing his side of the story and bringing relevant details in the public domain. It remains to be seen how Mahima Kukreja comes out in public domain and if she gives any justification about what has transpired. After all this is not just a case of individual victimisation, rather it involves the larger issue of why the women empowerment laws in India are getting a bad name and why even genuine complaints are now seen through the lens of suspicion. It is only because of such vindictive prosecutions and complaints that the entire issue of women empowerment and safety does not get the kind of social attention it deserves.

‘You don’t belong here,’ The New World order is final. And it is terrible news for China

‘We will punish India for this,’ China got so spooked by ‘Remove China Apps’ that it got Google to remove it

Manoj Tiwari has been sacked as the Delhi BJP chief. 2 years too late but good riddance