Bangladesh, a country with majority of its border surrounded by India, is now the brightest star in the sky of global economic growth. The overcrowded country with 162 million people posted above 8 percent economic growth in the last fiscal year. Bangladesh has the highest population density among the countries with large population and there is an acute shortage of agricultural land. But to compensate for the shortage of agricultural land, and utilize its huge labour force, Bangladesh chose to focus on manufacturing. 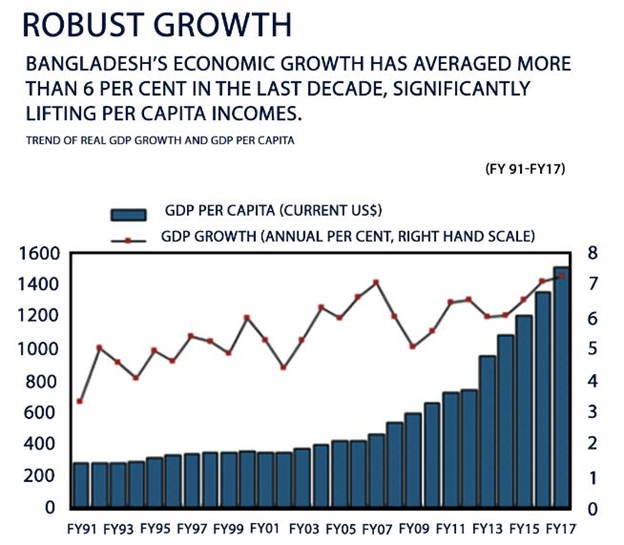 The garment sector, which alone accounted for 80 percent of the country’s total exports of the country in FY 17, is the backbone of Bangladeshi economy, and primary source of foreign exchange. In the last few years, it overtook India to become fastest growing economy in the South Asian region. 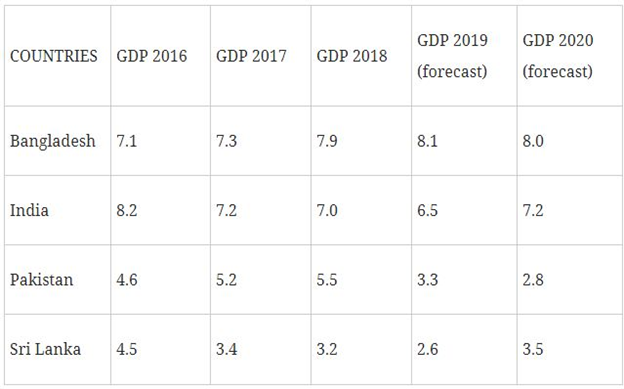 “With the tailwind of demographic dividend, healthy domestic consumption, rising investment, and successful export-oriented industrialisation, we have every confidence that our nation will continue on this high-growth trajectory in the 2020s and establish itself firmly in the 7 percent club,” said Naser Ezaz Bijoy CEO of Standard Chartered Bangladesh. He also pointed that, if Bangladesh could sustain this growth rate, the country will overtake India in terms of per capital come by 2030. 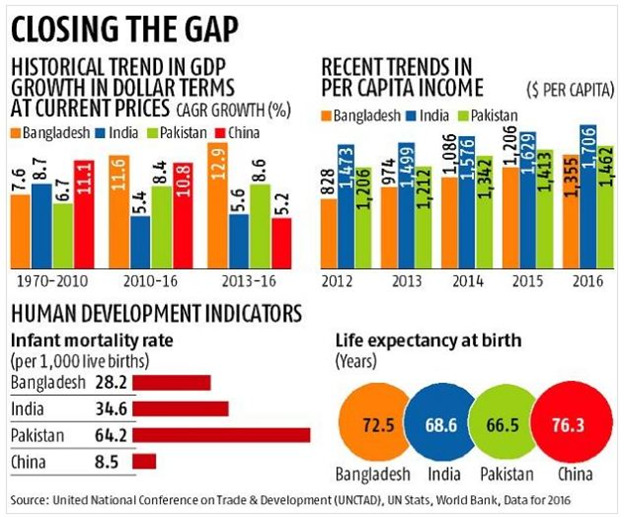 Currently, per capita GDP of India is 2,199 dollar while that of Bangladesh is 1,888 dollars. At the current growth rate, the per capita income of Bangladesh will be 5,734 dollars compared 5,424 dollars of India.

Like any other national economy, the economy of Bangladesh is dominated by Service sector which constitutes 53.5 percent of GDP and generates 39.8 percentage of total employment. The second largest contributor to Bangladeshi economy is manufacturing which constitutes 27.8 percent of total DP and employs 21.4 percent of working population. Last year, the manufacturing sector grew at double digit (10.2 percent) growth which is one of the highest industrial growth for any country. The countries around the world registered negative growth in industrial sector but Bangladeshi economy remained resilient in the global headwind due to strong macroeconomic fundamentals.

The Current Account Deficit (CAD) of Bangladesh is -2.7 percent of GDP, inflation rate at 6 percent and the gross governmental debt is at 33.7 percent of GDP. The controlled debt and an healthy inflation has kept the macroeconomic fundamentals of Bangladeshi economy very strong. The unemployment rate- at 4.3 percent is one of the lowest in the world.

The taxation in Bangladesh in not very competitive with 25 percent for corporates and 30 percent for the highest income bracket, but this gave the country space to spend on social sector. The country has a healthy tax to GDP ratio at 12.2 percent and last year, the parliament passed 62 billion dollar budget with 3.3 percent fiscal deficit.

The economic growth has given the government of Bangladesh fiscal space to invest in health and education and today the Human Development Index of the country is at 0.64, which is good for a country with such a low per capita income.

Therefore, Bangladesh has grown at a healthy pace under the leadership of Sheikh Hasina. The economy has very strong fundamentals and therefore the country is expected to grow above 8 percent in future.

The sad reason why no one takes Bihar seriously