There are copies of the Bible in almost every ward of this government hospital in Meghalaya. They might be removed soon

Only this week, we had reported on how the Jaintia Student’s Union, a student union masquerading as an NGO had asked for the immediate removal of a Ganesh Idol from the NIT Shillong campus. The unceremonious removal was demanded after three days of installation of the idol, and the JSU clearly said that the idol will have an effect on communal harmony. This threat-laden demand by the JSU had caused an uproar on social media, and rightfully so, but the Lord Ganesh idol was removed before things took a turn for the worse.

Perhaps in reply to this show of intolerance at NIT, The Legal Rights Observatory, an NGO, has now petitioned the Meghalaya Chief Secretary, Health Secretary and the Deputy Commissioner to ‘remove all copies of the Bible from the Shillong Civil Hospital, in order to maintain the secular nature of medical facilities.’ They have put forward this demand on the basis of the ‘NIT Idol Precedent’.

At the Shillong Civil Hospital, one finds the Bible placed next to almost all patient beds, irrespective of whether the patient is a Christian or not. This is not only the case with Civil Hospital, but with almost all hospitals in Meghalaya.  For the Bible to be placed in a government run hospital threatens the ‘secular’ fabric which every ‘NGO’ in the state is so keen to protect. According to LRO, it is a direct infringement of a non-Christian’s personal liberty. It also goes against the Articles 25, 26, 27 and 28 which grant a citizen religious freedom. Meanwhile, The Shillong Times reports that government officials have sought a report on the matter. 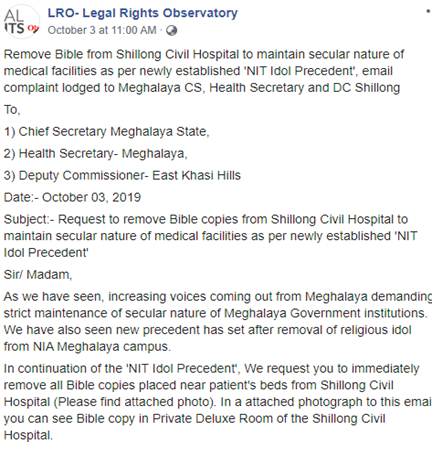 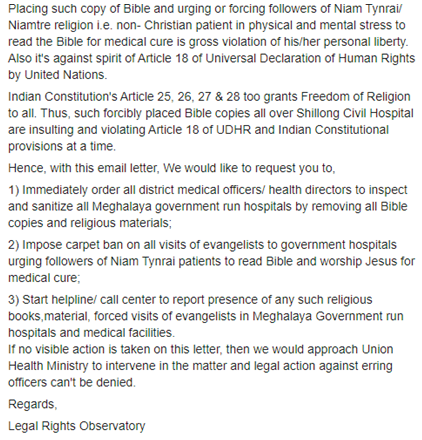 The Christian population of Meghalaya too have a section of fanatics. They look at the followers of the indigenous Khasi faith with absolute contempt, to the extent that many even consider the Niamtre followers as ‘devil worshippers’. Niam Khasi Tynrai is an indigenous faith still followed by many in the Khasi Hills. The other closely linked faith, the Niamtre or Pnar sect originally inhabited the Jaintia Hills in Meghalaya. The indigenous faith is referred to as ‘Niamtre’. The term ‘Jaintia’ is known to have been derived from the name of ‘Jayanti Devi’, which is believed to be an incarnation of Devi Durga. A Devi temple till date stands at Nartiang, in Jaintia Hills. This shows that the followers of Niamtre were undoubtedly practitioners of pagan Hinduism, however, the British annexation, followed by the onslaught of conversions of the local tribes to Christianity seems to have diluted the indigenous faith. The population of Meghalaya, today, is 74 per cent Christian.

For this reason, the Legal Rights Observatory has categorically mentioned the Niamtre followers in their petition to the government of Meghalaya. A reaction of this sort was bound to erupt after the JSU made a bizarre demand to remove Lord Ganesh’s idol from NIT Shillong. Until this demand was made, nobody batted an eye to such display of various faiths, mostly Christianity, at public places and government offices.

The petition also seeks to impose a carpet ban on the visits of all evangelists to government hospitals who urge all patients to read the Bible and worship Christ for medical care. The petition not only demands the removal of the Bible from Civil Hospital, but it further asks the Chief Secretary to direct all district medical officers and health directors to inspect and remove the Bible copies and other religious material from all government hospitals.

Meanwhile, on expected lines, hate comments were seen on the related posts on the Legal Rights Observatory Facebook page. The organisation has also mentioned that if no action is taken on their petition, they would be approaching the Union Health Ministry to intervene in the matter and also seek legal action.

As a result, the Directorate of Health Services has sought a report on the matter.  Whether there will be action by the authorities is yet to be seen. Inaction on the part on the government will go on to prove that there is a unilateral monopoly of one faith alone in the state while others are treated as lesser mortals.

Hypochondria – The biggest mental illness of current times. There are high chances that you suffer from it