No Result
View All Result
Newswire
Hope to inspire next generation of girls, say women football icons 30 mins ago
Exercising muscle may ward off chronic inflammation on its own 36 mins ago
Pak okays Russian vaccine for ’emergency use’ 51 mins ago
Bigg Boss 14: Sidharth Shukla comes back to grill contestants 51 mins ago
Cases of mutant Covid-19 strain linked to Australian Open 54 mins ago
Telangana’s Covid count drops below 200 1 hour ago
Next
Prev

India to remain the fastest-growing large economy ahead of China amid synchronised global slowdown, says IMF

The International Monetary Fund, the global lender, has published its flagship biannual survey – World Economic Outlook yesterday. This is the second report (first one came in April this year) under the Indian American IMF chief economist- Gita Gopinath. The document forecasts global and national economic growth in near and medium context.

The document is generally published in October and April and, policymakers in more 180 countries eagerly wait for this report. The report has very positive findings about India with the country being the fastest-growing large economy in the world in 2018. For the upcoming years too, India will remain the fastest-growing emerging economy, ahead of China. 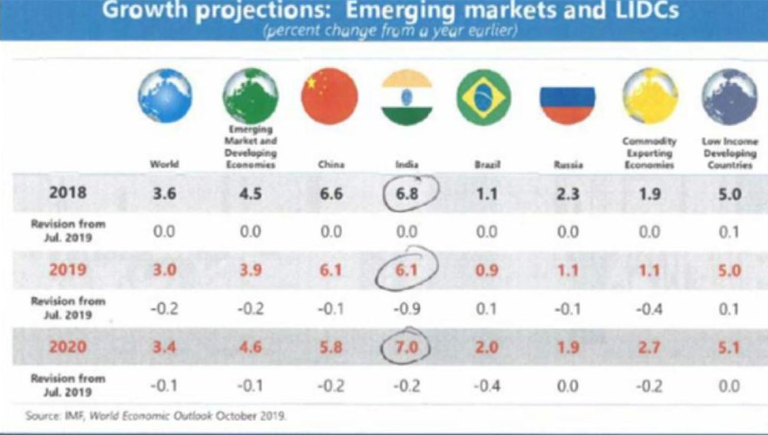 India projected to remain one of the fastest growing economies of the world in 2019-20 and also in 2020-21, according to "IMF ,World Economic Outlook-2019 authored by Chief Economist Gita Gopinath.#IMFMeetings pic.twitter.com/vU2eWzS9GV

“Growth is expected to moderate into 2020 and beyond for a group of systemic economies comprising the United States, euro area, China, and Japan—which together account for close to half of global GDP,” said the IMF report. 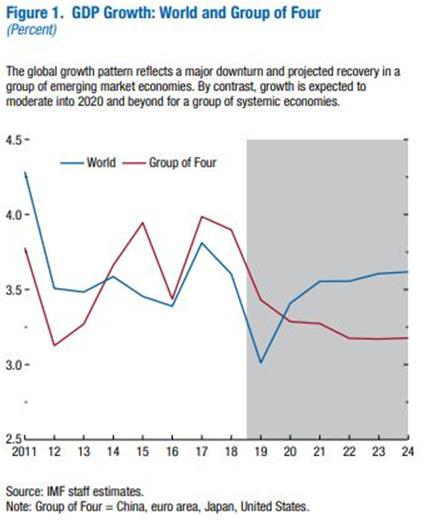 The Indian economy is expected to contribute most global growth, amid slowdown in major economies. The world category, which is expected to push the global growth, is led by India. “The strengthening of growth in 2020 and beyond in India as well as for these two groups (which in some cases entails continued contraction, but at a less severe pace) is the driving factor behind the forecast of an eventual global pickup,” reads the IMF report.

#IndianEconomy is projected to contribute the most to global growth when compared to other large economies of world, says the 'World Economic Outlook- Global Manufacturing Downturn, Rising Trade Barriers' Oct 2019 , report of the IMF.#IMFMeetings pic.twitter.com/nUXngw19u3

The global growth for 2019 was downgraded from 3.3 per cent in April report to 3 per cent in the latest report. This is the lowest economic growth since the Great depression of 2008-09.

The primary reason behind global slowdown is softening industrial production. In the last few years, major industries like automobile, steel production is facing a serious slump in demand. The second major reason behind global growth slowdown is the ongoing trade war, especially the US and China one. The Chinese economy, which is a major contributor to global growth, is severely hit by Trump’s tariffs.

The trade volume and global manufacturing PMI registered a negative growth in the ongoing fiscal year. The prospects of future do no look bright for the global economy, as investment across the developing world has declined significantly. Investment drives growth, and decline in investment means the growth will not pick up in the near term. 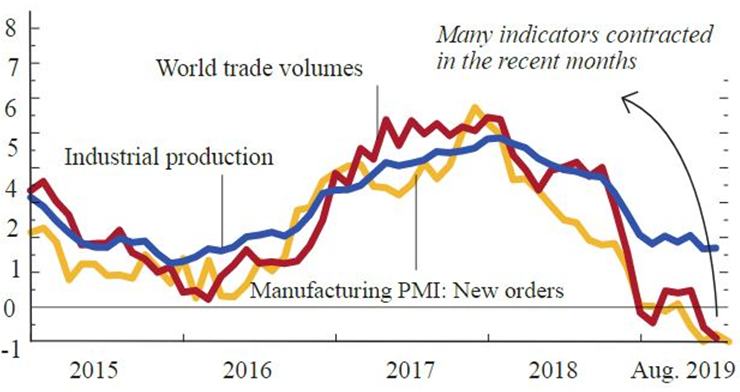 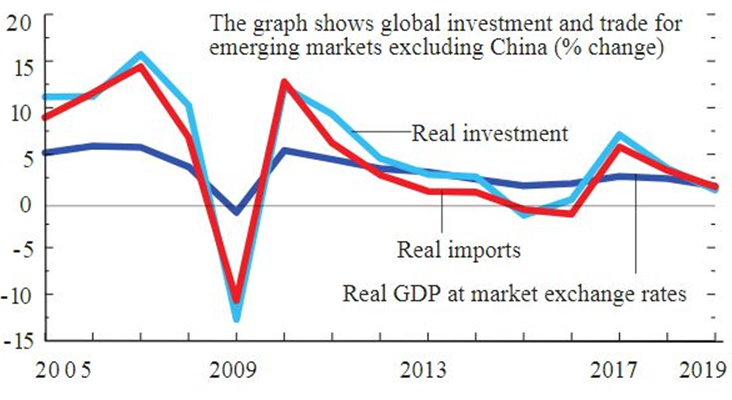 Indian economy, along with BRICS minus China plus Mexico, is expected to post a recovery in 2020, and lead the global growth. “In a few major economies, including India, Brazil, Mexico, Russia, and South Africa, growth in 2019 is sharply lower than in 2018, also for idiosyncratic reasons, but is expected to recover in 2020,” reads the foreword by Gita Gopinath.

IMF is optimistic about the Indian economy and it vindicates that the ongoing ‘growth recession’ is temporary, triggered by cyclical factors. Indian economy will lead the global growth in next year, and other developing countries (minus China) would assist it.

The policy analysts, economists and corporate houses around the globe have given very positive reviews about the economic policies of the Modi government. Two of the most important economic reforms have been in the fields of indirect taxation and the insolvency process.

The GST was waiting for implementation in the policy corridors for almost three decades as the previous governments could not bring all the stakeholders together to implement the uniform indirect taxation. But the Modi government has been able to build consensus for the implementation of GST in one of the most complex markets around the world. GST has helped increase the number of indirect as well as direct taxpayers. Top economists have predicted that GST will improve the GDP growth of the country by 1-2 per cent.

PM Modi has your back! Modi’s Saudi Arabia visit all set to bring relief for Indian workers

Bengal Vs Assam: How Didi settled illegal Muslim immigrants in Bengal Vs How Sonowal govt settled tribals in Assam