As the west sees a decline in factory jobs, India sees a revival

In 2013, Indian economy had collapsed due to gross economic mismanagement of the UPA government. The macroeconomic indicators were in red with high inflation, low economic growth, burgeoning Nonperforming Assets, and massive job losses.

Modi government took a series of measures to improve macroeconomic condition and this helped in job growth and rise of commercial activity. ASI data, which is based on survey of more than two thousand companies across the country, reported 4.8 percent annual growth in blue collar jobs (workers) and 4.5 percent growth in white collar jobs (managers). 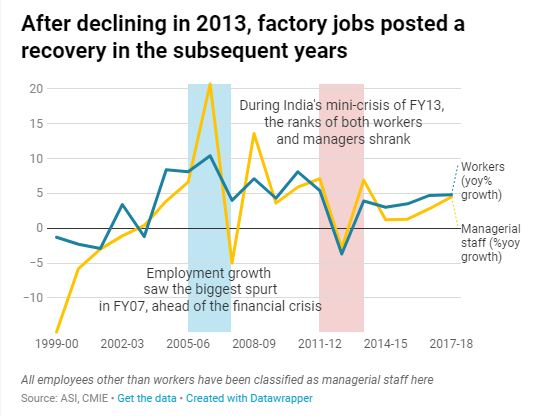 The read wage (wage-inflation) is also growing at gradual pace since the last three years. During the second term of the UPA government, the wages grew in near double digit terms but, given the high inflation rates, read wage growth was very low. Under the Modi government, inflation rate has not touched the upper bound of 6 per cent even once. In fact, it crossed the 4 percent only once since the central government mandated the Monetary Policy Committee (MPC) to maintain inflation rate between 2 to 6 percent. 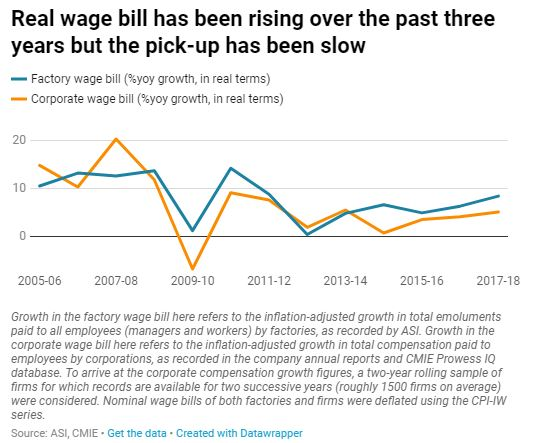 The factory workforce of the country grew despite decline in the number of jobs in labour intensive industries like textiles, food products, and basic metals. The textile sector of the country has been severely hit due to the rise of Bangladesh as cheaper production alternative. The job creation was led by automobile, pharmaceutical, and apparel industries which added the highest number of jobs since post 2008 economic crisis.

The data trend also points towards regional imbalance in factory job creation in the country. The Western India (Maharashtra, Gujarat, and Goa) is responsible for more than one fourth of total factory jobs. Western India, along with Tamil Nadu employs 4 people out of 10 factory workers of the country.

Previously, a report revealed that information technology (IT), BFSI (banking, financial service and insurance), education and e-commerce have given healthy job growth indications. As per jobs portal, Indeed India, these sectors are maintaining their pace of hiring entry and mid-level professionals.

According to Sashi Kumar, Managing Director, Indeed India portal, the IT sector has been hiring significantly despite the current economic slowdown. At the same time, the financial sector and the new age technology aggregators have also managed to maintain their earlier pace of job creation.

The healthy growth in number of jobs suggest that despite temporary economic slowdown, corporate India is optimistic about country’s long term growth potential.

2.5⭐: With a better director, 'The Sky is Pink' could have been a very important movie

India shows a confused Duterte the way, and that leads the Philippines far away from China

The Hindu newspaper is now an international embarrassment. Denmark’s Ambassador calls it out for twisting Danish PM’s statement

The truth behind the screaming headlines in the Hathras case

The fall of the mighty Tatas: How India’s oldest and most respected industrial conglomerate has hit a roadblock