Huge spike in oil prices as attacks on Saudi Aramco facilities threaten a geopolitical fallout. How vulnerable is India to this?

As Iran backed Houthi rebels in Yemen struck two major oil producing facilities of Saudi Aramco with 10 drones, the Middle East has been pushed towards further destabilization and this magnitude of volatility could take its toll on global markets if the conflict escalates. Saudi Arabia produces 10 per cent of global oil supplies, and the attacked facilities at Abqaiq and Khurais produce 5.7 million barrels per day (mbpd) or half of Saudi’s total capacity. These attacks have jeopardized 5% of the world’s daily production of crude oil and the effects of this conflict could reverberate in India.

With the immediate closure of 5 per cent of daily global oil supplies, the prices of Brent crude skyrocketed, registering a 20 percent jump. This is biggest spike in percentage terms, in the last 28 years, surpassing the single day disruption during Gulf war, when India faced the balance of payments crisis.

The attacked Saudi Aramco facility was the “world’s most important oil processing plant”, Abqaiq, and impact of its closure could be seen in the international oil prices. The analysts estimate that oil price, which has been in the range of $60-70 per barrel in last few months, could touch $100 very soon.

Although, given the $400 billion plus foreign exchange reserves, India is not as vulnerable to rise in crude prices as it used to be in 1980s, the culmination of which we saw in the 1991 balance of payments crisis. However, a northward movement in oil prices can adversely harm the GDP growth rate and public finance of the country.

Almost three decades ago- In late 1980s, India faced a balance of payments crisis. India had nearly no foreign exchange reserves and was only weeks away from being declared a ‘defaulter’ by the international community. One of the reasons behind India being pushed to verge of default was the near-decade long unrest in the Middle East, which peaked during Gulf War. The political instability in the black gold rich region pushed oil prices northwards, and India being dependent on imports for more than 80 percent of its oil demand, faced the heat of rising prices.

The public finance of India has always been vulnerable to variations in oil prices. As a rule of thumb, a 10 dollar per barrel increase in prices will lead to a burden of $10-11 billion (or 0.4% of GDP) on the current account deficit. 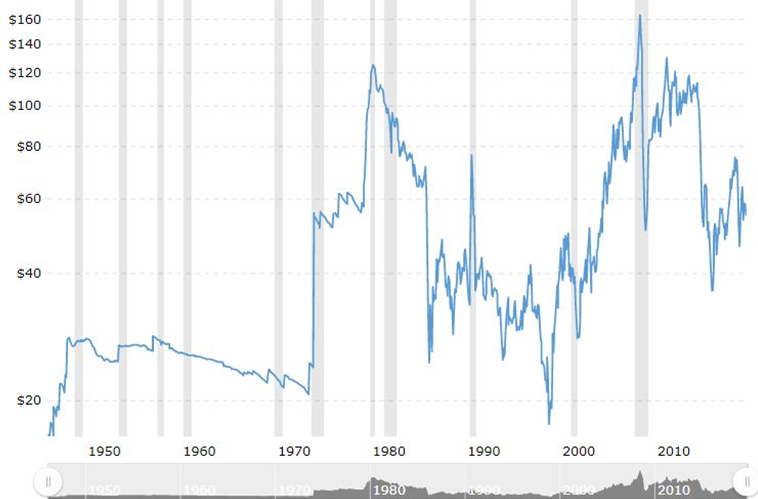 The above graph shows fluctuations in oil prices since 1940s. As indicated by sharp lines, the volatility in oil prices rose in 1970s, India become more integrated to global economy in 1980s. The per capita energy consumption also rose exponentially since 1980s, and India is third largest oil consumer in the world in 2019 and may soon surpass China as second largest consumer.

The Saudi Aramco oil facility disruption is short term, and the damage by drone attacks blamed on Iran could be overcome very soon. “Work is underway to restore production and a progress update will be provided in around 48 hours,” said Amin H. Nasser, Saudi Aramco president and chief executive officer.

The macroeconomic condition of India is very strong, and therefore, a short term fluctuation in oil prices will not create a 1980s like situation. But the stability in crude prices which is based on stability in the Middle East is important for economic growth of India; given the huge impact the oil import bill has on India’s public finances. With the attacks on Saudi Aramco facilities and as the USA pins the blame on Iran and tensions between Saudi Arabia and Iran intensify, the movements in oil prices in the coming week shall test the resilience of the Indian economy.

Big boost to Make In India, Trains made in India go GLOBAL