by Amit Agrahari
in Americas, Geopolitics

Donald Trump’s words cannot be taken on face value, but one area where you can be sure that Trump will do whatever he promises is the trade war.

“China agreed to buy agricultural product from the U.S. in large quantities, but did not do so. Additionally, my friend President Xi said that he would stop the sale of Fentanyl to the United States – this never happened, and many Americans continue to die! Trade talks are continuing, and during the talks the U.S. will start, on September 1st, putting a small additional Tariff of 10% on the remaining 300 Billion Dollars of goods and products coming from China into our Country. This does not include the 250 Billion Dollars already Tariffed at 25%…,” tweeted Trump.

…during the talks the U.S. will start, on September 1st, putting a small additional Tariff of 10% on the remaining 300 Billion Dollars of goods and products coming from China into our Country. This does not include the 250 Billion Dollars already Tariffed at 25%…

The announcement of tariffs hit the American and Asian markets. The oil prices also plummeted by 7 percent, this is the highest fall in the last few months. The Shanghai Composite Index of China registered 1.43 percent decline in last trading session while Japanese Nikkei was down by 2.11 percent. 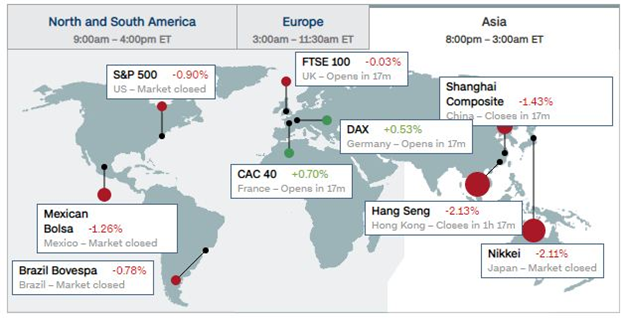 Trump is not pleased by the progress on trade talks and this was the reason behind increase in tariffs. The US has a trade deficit of almost 700 billion dollars of which China accounts for almost half. Imposing import tariffs is rebalancing the trade relations of US with countries like China, Japan, Germany, Mexico and others. Trump is vehemently opposed to the current trade relations between America and China because they are heavily skewed in favor of China.

The Chinese economy is facing a double whammy as domestic consumption is slowing down and exports are poised to hit due to trade war. The control freak Communist regime needs to make some outstanding efforts to redeem the economy. Stimulus announced by the government did not yield any positive impact for the economy, therefore, Chinese Communist Party run government needs to look for alternatives to avoid further reduction in growth.

George Floyd protests go international: Multiculturalism in Europe is biting back in the form of riots, loot and violence

After consolidation of Public Sector Banks, Modi Govt comes up with masterstroke to revive the banking industry

‘Save us from China,’ Philippines is suddenly leaving the pro-China bloc and moving towards US

What is the ‘Wolf Warrior’ diplomacy of China and why is the world suddenly discussing it?