Just to peddle a suitable agenda, Indian Media jumped the gun in the Sakshi Mishra case

Recently the BJP MLA from Bareilly, Rajesh Mishra aka Pappu Bhartaul became the center of controversy when his daughter Sakshi Mishra, who recently married of her choice, accused ‘his men’ of threatening the newly married couple.

BJP MLA from Bareilly, Rajesh Kumar Mishra alias Pappu Bhartaul's daughter has married a man of her choice. The BJP MLA is now after their life, has sent goons. His daughter has released this video requesting help! @Uppolice

Sakshi Mishra had married a Dalit man Ajitesh Kumar, due to which her father and BJP MLA Rajesh Mishra is quite aghast, as per the media reports. Though Sakshi didn’t directly accuse her father, she held her family responsible for the death threats levied on her. In an interview given to Aaj Tak, she said, “When I spoke to Ajitesh, my brother Vicky got to know first about this. He asked me continuously about him. Slowly, he started abusing me, and then he crossed all limits by beating me. He used to beat me and I used to plead him by holding his feet. I and my husband feel threatened by my father and his friends, which is why we had to upload the post on social media in order to protect ourselves.”

For the media, this was enough to begin the public trial. Setting up a media trial, they accused the entire family of threatening the girl against the marriage. To make matters worse, channels like Aaj Tak and India Today included Sakshi in their prime time in order to portray her father as the villain, and sites like Firstpost published completely one-sided articles:

Other media outlets weren’t far behind either:

Now going by the facts, Sakshi Mishra is barely 22 years old, whereas her husband Ajitesh is more than 35 years old. This is not all, Ajitesh was earlier engaged to another lady, though the engagement later broke off. According to some sources, the mahant of a temple where the two had married has hotly denied that the marriage ever took place: 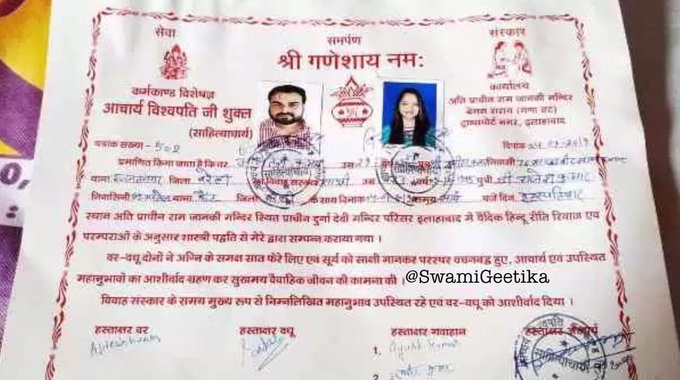 So far, in the entire story, the media seems to be at fault. They have jumped the gun on the issue without hearing the other side of the story. Any father would be concerned about the choices his daughters or sons make and as such is bound to disagree with some. Whether in this case the father did the things Sakshi Mishra is claiming is for the Court to decide but the media making a villain out of the father because he happens to be a BJP MLA and belong to the Brahmin community is insidious and reeks of agenda peddling.

On the other side, Rajesh Mishra has hotly denied the accusations, demanding that he be heard too. To quote him, “I respect her decision and I have no issues with her marriage. I would request the media and other people to stop harassing me. If this continues, I might be forced to commit suicide. My wife is so disturbed, that she has fallen sick, and due to my daughter, she is not even taking the medicines.”

Needless to say, some of the netizens got aghast by this unfair media trial and vented out their ire on the social media –

The truth of Ajitesh Kumar, who previously broke his engagement with a dalit girl in spite allegedly getting a dowry of Rs 7 Lakh. Why media is making a hero out of him? #SakshiMishra pic.twitter.com/CVWQtD1DQW

Dear @anjanaomkashyap : I wish your daughter do a same thing as #SakshiMishra did. Will see your courageous journalism their. You became a disgrace to this entire journalism industry. Have some #Shame

The way she accused her father and family on live tv made this seem like a dubious claim. Either she is mentally retarded or insect of leberty has bitten her badly.
Watch her interview on television.#SakshiMishra

The way the media has deliberately misused the entire case in order to accuse the entire family, just because Rajesh Mishra happens to be a BJP MLA, is not only atrocious but also unwelcome. How is it justified to declare Rajesh Mishra guilty in the media trial without listening to his side at all? No amount of criticism is enough to lambast the media for their current actions.

A VC and the Co-founder. Why more African countries are dumping China and embracing India