India to buy missile defence system from the US, build multi-layered shield over Delhi

by Amit Agrahari
in Defence, Weaponry
0

National Defense has been a priority of Modi government in the first term. The Modi government has focused on procurement domestically manufactured and imported weapons for Indian Armed Forces in order to protect our borders.

The second defense deal of India is with the United States. The government is ready to purchase National Advanced Surface to Air Missile System-II (NASAMS-II) from the US to erect a multilayered missile shield for National Capital Territory of Delhi. The Modi government plans to build a 5 layer air missile defense programme with two layers of indigenous air defense systems and three of US, Russia and Israel. Under the foreign military sales programme, the United States will send ‘letter of acceptance’ to sell NASAMS-II by August this year. The US missile defense system would cost around 1 billion dollars to the Indian government. 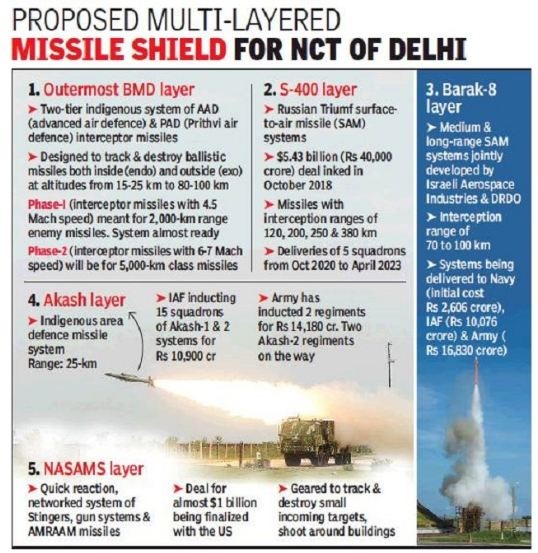 “Several rounds of negotiations, including selection of sites for deployment of the missile batteries around Delhi, have already taken place. Once the deal is inked, the deliveries will take place in two to four years,” said senior government official.

Previously India agreed to purchase S-400 advanced air missile defense system from Russia in October 2018. The deal took 4 years to finalize and India is set to get the Russian air defense system between October 2020 to April 2023. The US was opposed to this deal and also threatened to impose CAATSA (Countering America’s Adversaries through Sanctions Act) if India purchases the same.

However, India finalized the deal and has no plans to scrap 5.43 billion dollars S-400 deal. US wanted India to purchase Terminal High Altitude Area Defence (THAAD) and Patriot Advanced Capability (PAC-3) instead of S-400 but as per the government, “The American THAAD is not comparable to the Russian S-400, which meets our operational requirements.” The S-400 can track military drones, missiles bombers and jets at the range of 380 km and is best suited for defense from China and Pakistani missiles.

The second layer will be equipped with S-400 air defense system which is a highly sophisticated and robust system, being a large complex of radars, control systems and different types of missiles. Its radar can pick up incoming objects in its range which extends to a massive 1,000 km, track several incoming targets simultaneously and launch appropriate missiles for such targets on its own. It has a high success rate to go with such high standards of efficiency and automation. It can engage up to a mind-boggling 36 targets at a time and simultaneously launch 72 missiles.

The third layer will Barack 8, a medium and long range system being developed by Israeli Aerospace industries in collaboration with DRDO. The interception range of this defense system is 70 to 100 km and would cost around 50 million dollars to the government.

The fourth layer will be built with 25 km range indigenous Akash system and this would cost around 15,000 rupees. The last system would be of NASAMS being purchased from the US at the cost of billion dollars. The quick system will shoot small targets and shoot around buildings.

The five-layer air defense strategy will turn the national capital into an impregnable city. The Indian armed forces would be ready to deal with any Chinese and Pakistani threats. Modi government is preparing Indian landmass for 21st century threats. A futuristic defense strategy will help New Delhi to consolidate its position as a future superpower.