The Congress president has been attacking PM Modi in the recent past by making baseless accusations and senseless remarks. Mostly his criticism of PM Modi has been based on lies and concoctions. Rahul Gandhi has persisted with the same modus operandi. In order to malign PM Modi, Rahul Gandhi has invented a new term and went on to morph an English dictionary in order to substantiate his baseless claim. Rahul Gandhi tweeted a screenshot according to which ‘Modilie’ has become an official word. As per the screenshot, it means: To constantly modify the truth; to lie incessantly and habitually; and to lie without respite. Modilie is a word used by the Congress since 2012 to accuse PM Modi of peddling lies. This term has been used since his days as the chief minister of Gujarat. However, the Congress has not been able to cause a dent in PM Modi’s popularity through its unsavory remark. Therefore, the Congress president has taken it further by spreading fake news about the term on his Twitter handle.

However, Rahul Gandhi’s lies were busted soon. In his first tweet, he had shared the screenshot “Oxford living dictionary”. However, a simple search of the word in the dictionary showed no results. A closer look at the screenshot shared by Rahul Gandhi reveals that the logo he shared in the screenshot of was slightly different from the original logo of the said dictionary. The dirty tricks of the Congress IT cell have therefore been badly exposed and the Congress president caught red handed spreading fake news.

However, Rahul Gandhi did not stop here, he deleted his first tweet within minutes. And thereafter he shared a second screenshot. In this tweet, the logo of the dictionary was further modified. 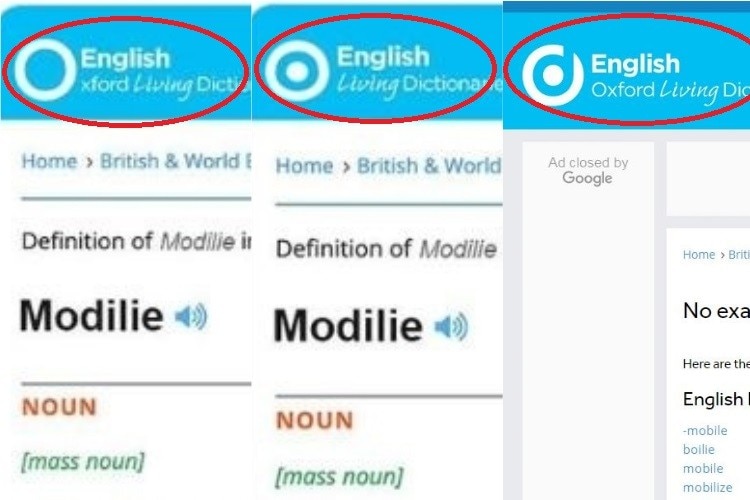 It is ironic how Rahul Gandhi’s claim of spreading such a term was in itself a lie. It takes special courage to openly spread such blatant lies especially when there is a high probability of being badly exposed and humiliated. The Congress president should think twice before indicting others of spreading lies. Rahul Gandhi has been spreading lies and rumours about PM Modi in an attempt to tarnish the image of the present government. When it comes to the Rafale deal, Rahul Gandhi has been acting like an obsessive liar. The fake screenshot only adds to the pack of Rahul Gandhi’s lies. Rahul Gandhi seems to have taken inspiration and lessons in photoshop from his social media cell head, Divya Spandana. Divya Spandana had recently shared a morphed picture comparing PM Modi to Adolf Hitler.