by Somya Verma
in Analysis
0

With the long seven-phased 2019 Lok Sabha elections coming to an end, the front pages of the news daily greeted the victory of BJP led NDA coalition with bright colors. From The Indian Express to The Hindu, all have commemorated the winning of PM Modi. The Election Commission declared results of 534 of the 542 seats and they were in favor of BJP. BJP had already flagged its existence over 300 seats and is leading with another making the total tally to 303.

After the results, PM Modi said in his victory speech, “We have come back with full majority. This shows people’s belief in us.” He thanked the party workers and leaders saying, “The BJP is a special party. Nothing stops us, nothing holds us back. We work tirelessly and stay focused.”  And today the newspapers have a huge and bold headline, celebrating the might of the mandate. The Hindustan Times noted that the BJP win was a “vindication of strategies of converting the elections into presidential-style contest”. 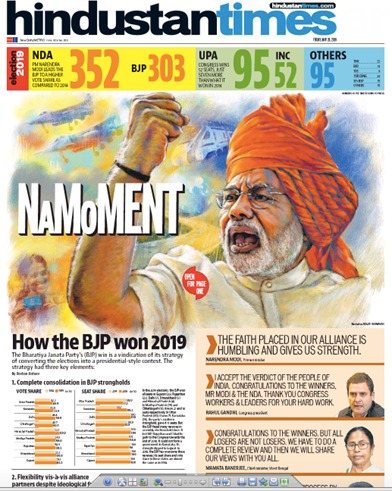 The Indian Express had a three-page detailed coverage of the election that included the reaction of the winning and losing sides. It also mentioned the point that the large margin of increase in votes from 17crores to 22 crores is what scripted the victory of BJP. 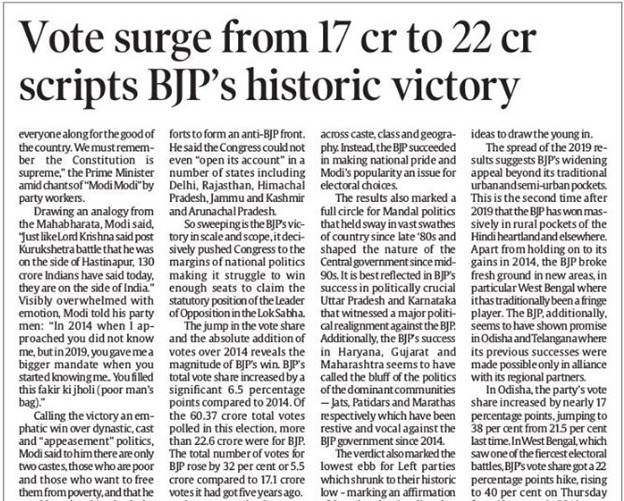 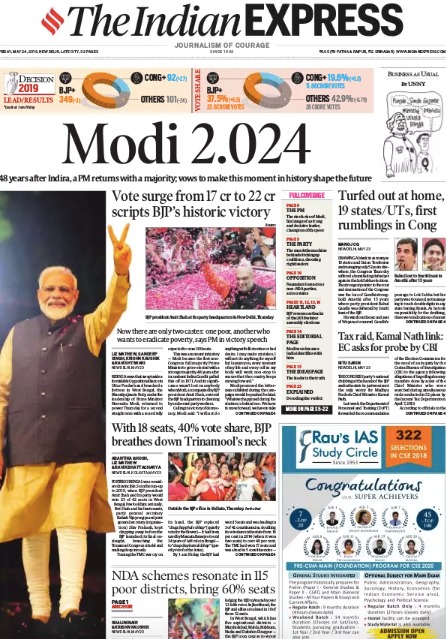 The Hindu, on the other hand, a rather pop cultural reference on its front paper, with headlines stating “India gives Modi a high five”. Giving a proper description with graphical representation, it was indeed true that liberal establishments like Hindu have equally accepted the inevitable winning. 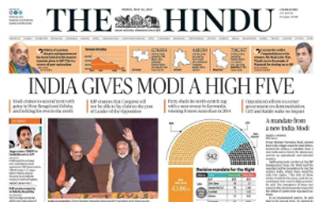 With a candid title of its front page, The Times of India published the article under, “Chowkidar’s Chamatkar”. Like The Hindustan Times, even the article hinted about the presidential style contest. It read, “This election was about Narendra Modi, and he has won by a landslide, across castes and geographies.” Curiously, the PM’s Twitter handle no longer carries the “Chowkidar” tag.

The paper also drew comparisons between Indira Gandhi, Jawaharlal Nehru and Modi. “He (Modi) has rewritten history, becoming the 1st non-Cong PM to return to office after a 5-year term; the 1st PM since Indira Gandhi (in 1971) to retain power without needing the support of allies; but 1st PM since Nehru (in 1967 & 1962) to win back-to-back majorities on his own.”

The Telegraph, however, was seen pushing a weird agenda in the three different narratives formed in the news daily. The front page read “He is back” a reference from the famous Harry Potter serious which meant the return of Voldemort, the antagonist of the series. The second page, which probably was an advertisement by the management institute, favored PM Modi, and then another reference was seen on the third page from the Game of Thrones series. It is, however, an important question to ask, if The Telegraph was pushing the subtle liberal agenda. 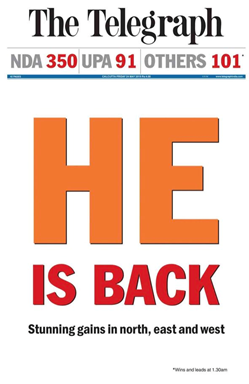 Hindi daily Dainik Bhaskar also reported Modi’s victory on its front page. In its Bhopal edition, the paper said, “Mitron, Modi hai to mumkin hai(Friends, if its Modi, it is possible).” Quoting from Modi’s victory speech, the paper said, “Ab desh mai do hi jaati bachengi, ek garibi, dusri garibi dur krne wale. (Now India will have only two castes: one poverty, and the other will be people who’ll remove poverty.)” 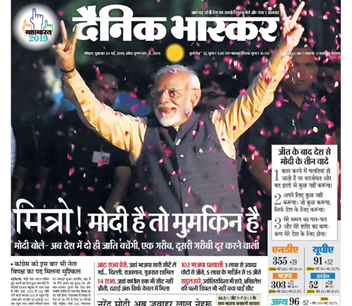 Dainik Jagran and Hindustan too have reported the grand victory. While the former wrote “Phir Ek Baar, Modi Sarkar”, the latter had captioned the article as “Mahavijeta Modi”  It was not only the Hindi heartland newspapers that celebrated Modi’s victory, but south Indian newspapers like Dinamalar also published the coverage. Even Malayalam paper Mathrubhumi reported, “Undefeated Modi.” 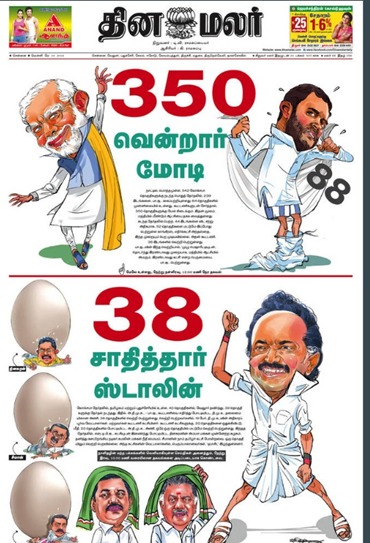 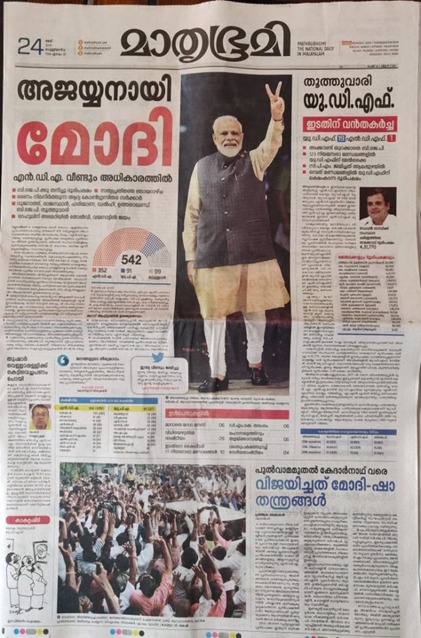 Print media, like the virtual media, left no opportunity to celebrate this electoral festival. It was a tiring month of covering news and bringing out all the aspects of the electoral race. It was hence sure, that the country was in a celebratory mood after BJP won the highest mandate and would soon form the government at the centre, with PM Modi as its head.

Priyanka Vadra, the worst ‘star’ campaigner in the history of mankind

The West that starved India of food, medicines and essential supplies is now crying about wheat