Correlation of the urban middle class voters with BJP

The number of voters and voter turnout has witnessed a tremendous increase in India over the years. In the very first Lok Sabha election in 1951, there were 17.3 crore registered voters in the country out of which 45.7 percent voted. The number of voters increased to 83.4 crores in 2014, which was almost five times as compared to the figure in 1951; while the voter turnout increased to 66.3 percent, witnessing a 20 percent increase. The number of political parties and contestants per constituency also increased exponentially over the decades. These figures indicate that society is more democratized today and there is healthy competition in the arena of party politics. 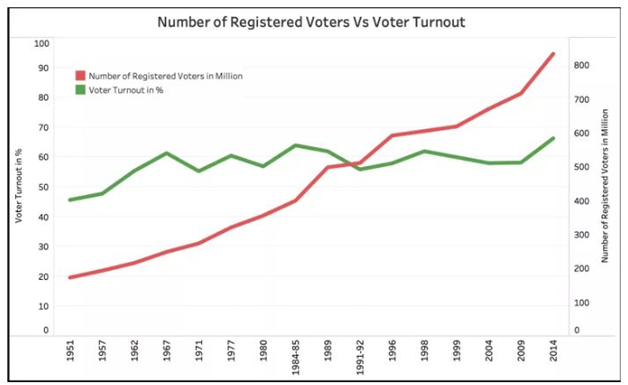 The data analysis of voter turnout gives important information about voting behavior and how it is related to the success of a particular party. The general theory is that high voter turnout represents electorates’ demand for a change and anger with the incumbent government. However, in the case of BJP, it works differently. Low voter turnout has been harmful to the party over the decades. The reason behind this is that voter turnout of among middle class to lower is the one that fluctuates as compared to lower class or backward caste.

The middle class has been the traditional voter base of BJP for decades and if this class does not turn out to polling stations, the chances of a BJP win gets reduced. As evident in the above data, the voter turnout among the upper and middle class increased in 2014 and the party preference was BJP. Congress got just 20 percent of the middle class votes while BJP got 32 percent. This 12 percent difference is what helped the BJP to score a victory over Congress, which was reduced to double digits. “One can say that in 2014 the class-wise gradation of pro-BJP responses, with pro-BJP sentiment rising as we go up the class hierarchy,” wrote E Sridharan Academic Director of the University of Pennsylvania Institute for the Advanced Study of India in National Election Study 2014. 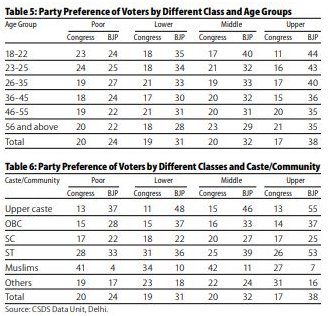 BJP is primarily considered an urban party. The voter turnout among urban constituency is lower as compared to the rural ones. Whenever the voter turnout in urban areas increases, the probability of BJP getting elected gets higher. Therefore, if the voter turnout is lower, it ultimately hits the electoral prospects of the BJP.

In 2004, the approval rating for Atal Bihari Vajpayee government was very high given the outstanding work his government had done on the economy, infrastructure, and national security. The urban middle class was of the view that BJP will win the election whether they cast their vote or not. The media, political analysts, psephologists, and even the opposition leaders expected a BJP win, but as we are well aware, the year 2004 was a huge setback for BJP, with the party finally rising in 2014 under the leadership of PM Modi.

The oblivious state of the Indian middle class resulted in the UPA government at the centre, which wrecked a fast-growing economy and looted billions of dollars of public money. The government was re-elected in 2009 on the promise of doles and ultimately the Indian economy was left in a poor state. The situation improved only after the NDA government came to power and implemented tough reforms to revive the economy. The one decade under the UPA was the worst for the Indian middle class with inflation at unprecedented heights and the income moving downwards. Therefore, if the middle class wants to protect their interests, they need to go out and exercise their right to vote.

Reliance to build megacity in Mumbai region with $75 billion investment

They want to control you, your thoughts, your actions. But 1 man is standing in their way