The economy of Pakistan is a complete mess and the debt-ridden country is seeking IMF loan for a bailout. India has warned IMF against any possible bailout to Pakistan as the country is in ‘grey list’ of FATA, the global terror financing watchdog. The global lender is expected to provide 8-12 billion dollar loan to Pakistan to save the country from going bankrupt. However, India warned that the FATA will examine the progress of Pakistan in prohibiting the transaction to terrorist organizations. The Financial Action Task Force (FATF) will probably put the country is ‘black list’ in the upcoming peer review which is scheduled in next month. India has warned to IMF that its loan would be wasted if the country is blacklisted in the next FATF meeting. 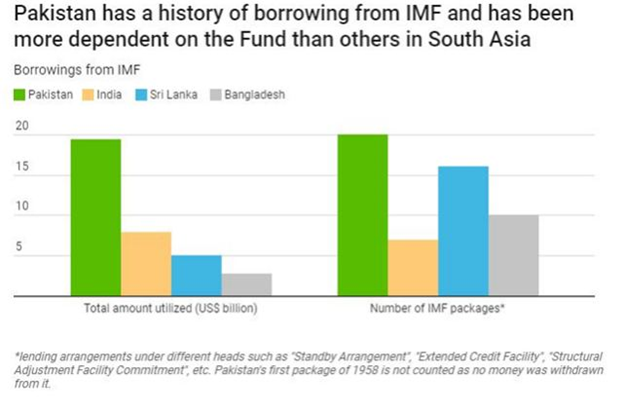 In the past few years, we have witnessed that Pakistan has become used to living on borrowed money. The country asks for money to rich countries like the United States and China. When the money borrowed from these countries is not enough for the survival of the country, they move to international organizations like IMF. For years the country has used its strategic geopolitical location to get money from the United States. Pakistan had become a pawn in the hands of the US in its proxy war with USSR. For years, the US pumped billions of dollars in Pakistan as financial and military aid. In the post-Cold War world, it allied with China due to their mutual fear of India. But as economic clout of China grown over the years, the relationship of equals became like that of a colonial subject and master.

The foreign money has helped Pakistan live beyond means. The country faces a typical debt problem where government spending exceeds revenues and imports outpace exports. Pakistan has foreign exchange only to support two months of imports and that too due to loans from Pakistan. As the country faces another balance of payments crisis, the government has decided to move to the International Monetary Fund to seek help. The bureaucrats of the country has prepared plan for 12 billion dollars help from the IMF. If the country succeeds in negotiations with IMF, this would be the thirteenth bailout package for Pakistan since 1988. The country has taken 12 bailout package from IMF in the last three decades despite consistent monetary help from the US and China in the form of military and financial aids. Neighboring countries India, Bangladesh, and Sri Lanka has taken a substantially lower number of bailout packages in the same period with India having only two both during the 1991 financial crisis.

The timely bailout packages and foreign helps never forced the Pakistan government to take structural reforms to solve the chronic diseases of balance of payments. Whenever there was economic trouble, the country used its strategic location to seek financial help from foreign countries which were ready to help give the country agrees to become a pawn to them in their foreign affairs strategy. This time Trump administration has decided to cut military and financial aids to the country and it had already taken successive loans from China. Therefore now IMF must put tough conditions for this financial package. Until and unless Pakistan government goes for tough structural reforms the situation will not improve. The country has already got tonnes of money from financial institutions and countries but the condition is the same in the last seven decades.

4 steps forward, 5 steps back – After challenging and confronting India, China now says ‘War not in question’