by Somya Verma
in Economy
0

In 2014, Modi government brought a wave of reforms and changes that dramatically changed the face of India’s economy. Aadhaar might be the brainchild of the UPA government, but under BJP, it has been transformed as tool to manoeuvre the development of the country. As the Supreme Court verdict on Aadhaar has allowed the Unique Identification Card (Aadhaar card) details to be used for Direct Benefit Transfer (DBT), government could use it for many more schemes. It has made the welfare schemes reach a large portion of the population of the country.

The use of DBT has helped in stopping leakages from the economy. It was beneficial for weeding out the undeserving and ghost beneficiaries from important government schemes. As of now, government uses DBT for 465 schemes which range from LPG subsidy to college scholarships. However, after the SC approval, the use of Aadhaar in other major schemes like Mahatma Gandhi National Rural Employment Guarantee Scheme (MNREGS) and the Public Distribution System (PDS) has helped put an end to corruption and leakages in these schemes. There are now 1.24 billion Aadhaar cards in India, covering approximately 98% of the country’s population (using 2011 Census projections). 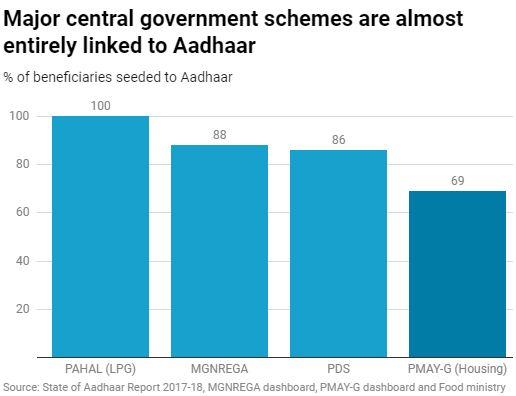 The use of Aadhaar in the implementation of government programmes has made the system more efficient and transparent. This is in contrast to the strategy of previous regimes which breaded corruption and proved to be inefficient. The five years of Modi government have been all about transforming India and dealing with important issues like corruption.

The benefit of Aadhaar is the biometric identification which helps in indentifying the actual and deserving beneficiaries of a scheme or programme. With the help of Aadhaar, India’s two of the largest schemes, MNREGS and PDS, are able to reach 90% of the beneficiaries. All the major government schemes are almost entirely linked to Aadhaar.

The welfare scheme of Jan Dhan Yojana received huge attention from the NDA government. The scheme has helped in financial inclusion and the total amount is inching towards 1 lakh crore rupees.  2014-15 Economic Survey considered Jan Dhan-Aadhaar-Mobile (JAM) trinity as a potential game changer because DBT through JAM can circumvent corrupt intermediaries and reduce market distortions.

In the last two years, DBT has significantly picked up. In 2018-2019, Rs 2 trillion, which is about 8% of the government expenditure, was delivered through DBT into the account of the beneficiaries. The impact of DBT can be seen in many programmes such as PAHAL, MNREGS, Fertilizers, Housing programme, PMAY and PDS. The reach of the schemes has also increased through the use of DBT and this has helped them in receiving money directly in their accounts, equipping them to save enough to be afloat in times of need. 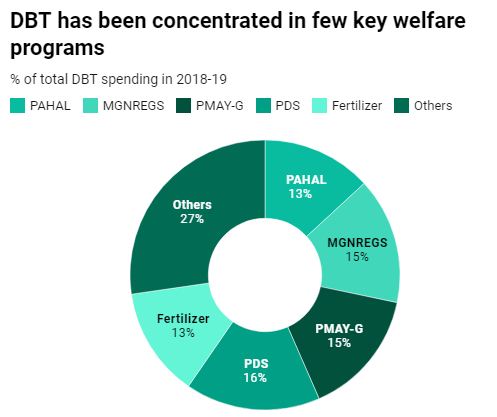 DBT Mission aims at saving and it has helped the government save 1.2 trillion since 2014. The government claims that Aadhaar has generated savings by eliminating duplicate and fake beneficiaries. There have been evaluations which proved that 90% of beneficiaries have preferred the system of DBT as it has helped reduce the leakage, decrease time delays and improve the accessibility of services. With gradual improvements and inclusions, Aadhaar and DBT are well poised to reduce the corruption to a minimum in the country.