As the supreme verdict on Aadhaar has allowed the unique identity to be used for Direct Benefit Transfer (DBT), government could use Aadhaar identity for many more schemes. Universal Basic Income (UBI) is being debated among policy circles of the country and Aadhaar could also be used to transfer a fixed amount of income in people’s bank account for the purpose of welfare. As of now, government uses DBT for 465 schemes which range from LPG subsidy to college scholarships. “The Supreme Court judgment is a great step forward for use of technology in governance. Aadhaar is already being used in several areas, several state governments have used it. I am sure it will continue to be of great benefit to the society,” Jaitley said while briefing reporters after the cabinet meeting. 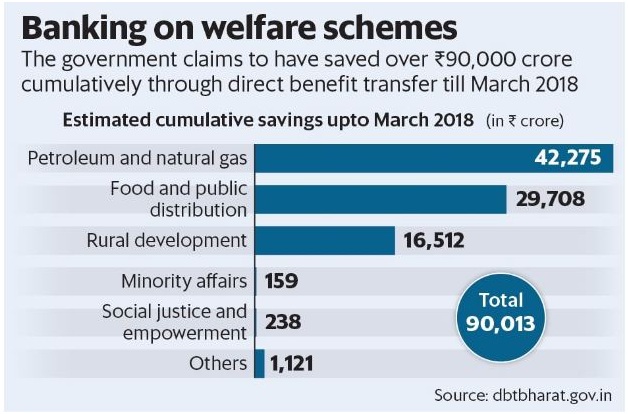 There are talks that DBT could also be used for direct transfer of compensation to farmer’s account instead of using Minimum Support Price (MSP). “To make farming remunerative, the delivery of inputs should be made cost-effective through direct benefit transfer mode. Further, there are issues of procurement of perishables such as onions, potatoes and tomatoes for which timely disposal is necessary, and may be difficult for an agency to efficiently perform. After debating the same, support in the form of MSP (minimum support price) for crops other than rice and wheat needs to be shifted to DBT format,” wrote Economic Survey 2016-17.

Government has saved leakage of almost 90,000 crore by using DBT.  In 2016-17 alone, government saved plugging leakage worth32, 984 crore. DBT also made transfer of MGNREGA benefits more transparent and removed the middle man. Earlier the gram pradhans used to force the beneficiaries to do household work or give them some agricultural work in their own land. Some jobs were so unproductive that the workers had to dig a pond and then refill it because they had no actual work to do, and the government had promised to give a job of at least 100 days to them. DBT has been hugely beneficial for the government to control the leakage in delivery of public services. The leaders used to say that if we spend 100 rupees for welfare only 10 percent of that reaches to people. Now by using DBT, government could transfer 100 rupees directly to beneficiaries account.

Supreme Court declared the use of Aadhaar data by private companies as unconstitutional. These companies could no longer make Aadhaar identification compulsory for their products and services. Unique Identification Authority of India (UIDAI), Department of telecom, and Law ministry are looking for an alternative plan to Aadhar based e-KYC. According to bureaucrats, people need some kind of digital identity, “Digital identity is required across platforms. So it’s not a question of Aadhaar or mobiles alone. A lot of people, because they move to the digital mode, they need some form of digital identity. Now if it cannot be Aadhaar, what should it be we have to evolve through this,” said Secretary, Department of Telecommunications (DoT) Aruna Sundararajan. However the agencies will make the solution compliant to apex court’s decision. “First of all, we will have to ensure that in the coming days, we become completely compliant with what the Supreme Court has said in terms of data not being stored beyond the stipulated period; about private agencies not using Aadhaar database. After that we will have to see, going forward, what is the way to ensure that eKYC – which was done in a particular way with Aadhaar – is possible in an alternate way without using Aadhaar,” added Aruna Sundararanjan.

Brett Kavanaugh and weaponisation of sexual assault allegations in politics