by Indranil Sen
in Trending
0

As Wing Commander Abhinandan returned home, the Pakistani government’s propaganda peddling machinery doesn’t seem to stop. In a yet another false claim about India, Pakistan, through its media and officials, said that the US expressed its displeasure over Indian claims that one of the IAF MiG 21s downed an F-16 jet of the Pakistan Air Force and Lockheed Martin is going to file a lawsuit against India over these claims.

These claims were further backed by a senior government official of the neighbouring country. Danyal Gilani, Director of Information Minister’s Office and former Press Secretary to PM, tweeted, “F-16 manufacturer Lockheed Martin to file law suit against false Indian claims & expresses annoyance over the factually incorrect claim of shooting down of Pakistan’s F-16 by IAF. Says all F-16s on Pakistan I inventory r well counted for!” 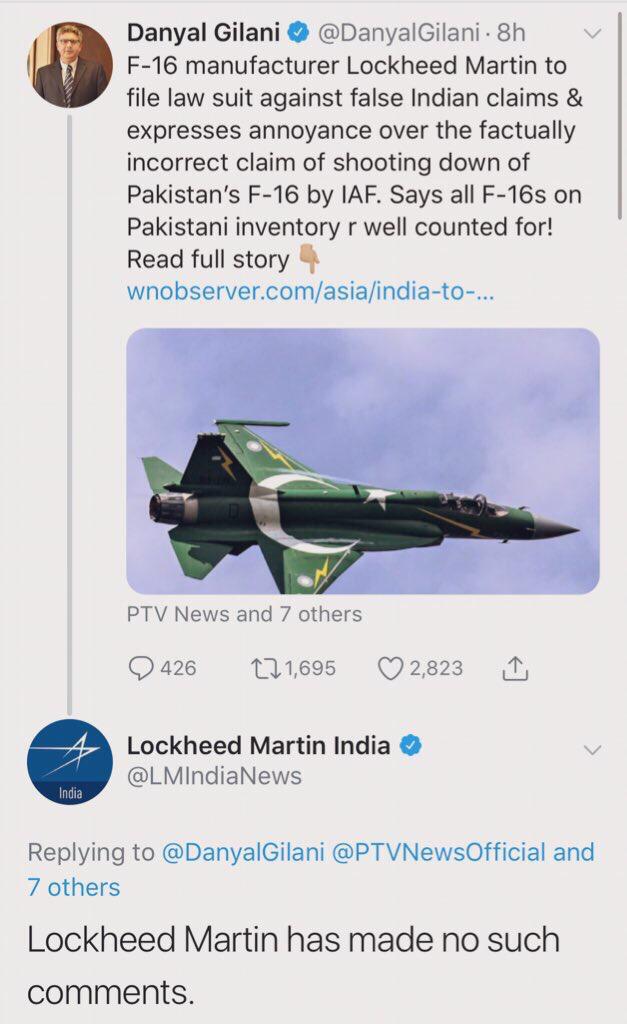 The report also claimed that Lockheed Martin was extremely shocked at these supposed ‘false’ claims by India and the company reserves the right to claim damages for the “loss of their highly integrated state of art air lions.” World News Observer said, “The United States enterprise has termed it outrageous and disrespect to the sophistication and repute of this Avionics excellence.”

However, in a yet another major embarrassment to the terrorist nation and its propaganda peddling machinery, Lockheed Martin has outrightly rejected these claims by Pakistan. The company replied to Danyal Gilani and said, “Lockheed Martin has made no such comments.”

Lockheed Martin has made no such comments.

The report also mentioned that two IAF jets were shot down by Pakistan. However, in reality, India lost only one MiG-21 Bison jet that Wing Commander Abhinandan was flying. “Furthermore, after two IAF MiG-21 shot downed by the PAF fighter jets Indian ministers and Armed forces officials during the press conference were unable to prove Pakistan’s Armour loss,” the report said.

It is not the first time that Pakistan has stooped to such acts of false claims against India. Earlier, Spokesperson of the Pakistan Armed Forces, Maj Gen Asif Ghafoor had said that Pakistan had shot down two aircraft of the IAF, however, the fact is that India lost only one jet and Pakistan lost one of its F-16s in the dogfight.

In response to PAF strikes this morning as released by MoFA, IAF crossed LOC. PAF shot down two Indian aircrafts inside Pakistani airspace. One of the aircraft fell inside AJ&K while other fell inside IOK. One Indian pilot arrested by troops on ground while two in the area.

It is interesting to note that Pakistani PM Imran Khan had earlier said that Pakistan was releasing IAF Pilot Wing Commander Abhinandan Varthaman as a peace gesture to further their propaganda. Imran Khan said, “As a peace gesture we are releasing Wing Commander Abhinandan tomorrow.” Khan also said, “Pakistan wants peace, it is only working towards bringing peace and stability in this region. This tension is not good for any of the countries.” However, this is far from the truth as the world knows that Pakistan had to release the captured pilot as per Geneva Convention and Imran Khan had no other choice.

Hyderabad results must be making the Thackerays super nervous; because they know BMC is next

Diljit Dosanjh had a promising career in Bollywood, but after his “100 100 rupay waali” jibe, he has killed his own career

In a big worry for KCR and Owaisi, BJP puts up a historic performance in Hyderabad