The trailer of the much-awaited ‘Uri’, based on the historic surgical strikes, has finally been released. With power packed performances, savage dialogues, goosebumps-inducing background score, and explosive VFX, this trailer has become a rage on YouTube, earning more than 7.5 million views on this platform in just 1 day.

Starring Vicky Kaushal, Paresh Rawal, Yami Gautam etc. in principal roles; this movie retells how the dastardly attacks at Uri base camp in September 2016 forced the Indian government to take punitive action. Subsequently, the surgical strikes were conducted against the Pakistani forces and terrorists on 29 September 2016, which took the entire nation as well as the world by storm.

However, not everyone is impressed with the brilliant ‘Uri’ trailer. Most of us had already anticipated the backlash when one writer on Rediff had castigated the teaser, calling the movie a promotional campaign for the BJP. However, one news portal took this movie bashing to a nauseating level. Our usual suspect, The Wire, posted the following:-

So according to the journalist, ‘Uri’ trailer is a symbol of how ‘toxic’ the ‘hyper-nationalism’ campaign has become. Written by Tanya Jha, this article accuses the movie of commercializing the surgical strikes, and also takes a sly dig at the current government, as she mentions: “The film’s timing will help the BJP market the surgical strike in the 2019 elections as its unique contribution to Indian security — a claim belied by similar army actions taken under previous governments. The fact that a key official shown in the trailer is a dead ringer for national security adviser Ajit Doval is a giveaway.”

Going by the tone of the article, this reeks more of the vicious propaganda that criminalizes any form of nationalism or patriotism imaginable than a genuine movie review.

To quote an excerpt from The Wire’s aforementioned article, “We are introduced to a ‘Naya Hindustan’ where India is set to teach Pakistan a lesson through violence and bloodshed. The tone further builds up when soldiers shout ‘Jai Hind’ as their leader blurts, “They want Kashmir and we want their heads.”

The article goes on to mention, “From a blaring background score to beast-like soldiers who want nothing but the enemy’s blood, this war film is another addition to several other military dramas that are cashing in on our contemporary hyper-nationalism.”

However, matters came to a head when the article attempted to downplay the terror attack at the Uri base camp. Notice this excerpt, “Uri is based on the 2016 surgical strikes carried out by the Indian army in retaliation to an alleged terror attack in Kashmir.” 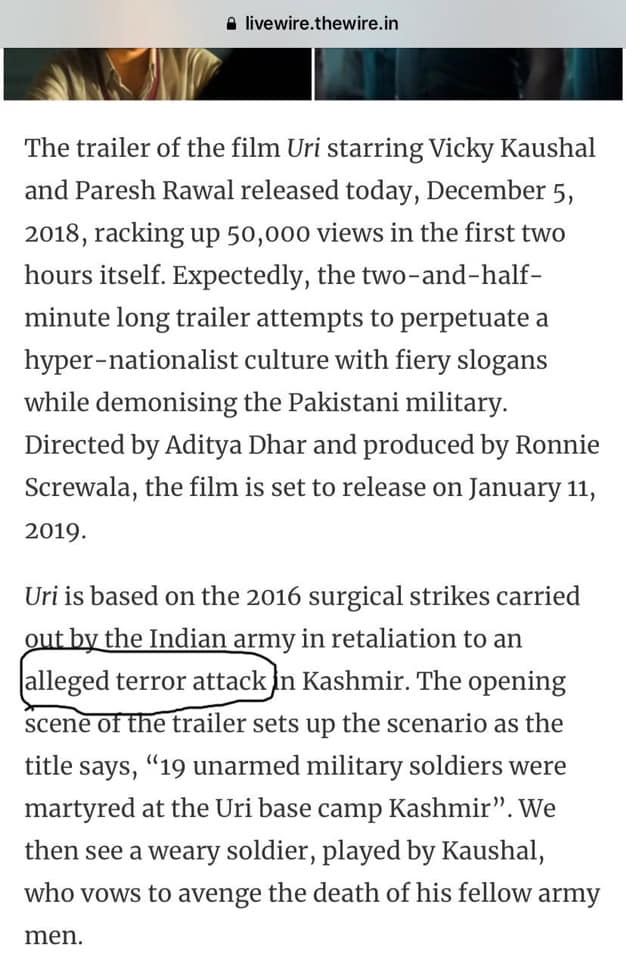 These tendencies are quite visible in the trailer’s comment section – which is full of abuses, calls for patriotism and national flag icons. On top of that, the video description of the trailer says, “Ye naya hindustan hai, ye ghar me ghusega bhi aur marega bhi!”

In case our writer doesn’t know, Uri was not a random terror attack. Four bloodthirsty terrorists attacked unarmed Indian soldiers, most of who were sleeping peacefully. This was a cold-blooded murder, but instead, those soldiers are beastly who want revenge, in the eyes of the author of this article. Is there no limit to shamelessness? Is hatred for the current PM so much that insulting our heroes in uniform is the new cool?

However, this is not the first time that The Wire has bashed anything even remotely related to India. Can we forget the way they demonized movies like ‘Parmanu’, ‘Gold’, even ‘Raazi’?

On the contrary, look at the paeans they sang for pathetic movies like ‘Mulk’, ‘Veere Di Wedding’, ‘ Manmarziyaan’ etc. , as shown below:-

As such, the criticism of Uri trailer also signifies that The Wire is dead scared of the brutal shredding of political correctness that this movie has done. The way this article has been trolled on social media forced them to take down the link from Facebook, and it also sends a positive, but stern message to hate mongers like The Wire that they cannot insult just anything pro India and get away with it.

Not so surprisingly, another one from the leftist media portal Scroll.in was not so far behind either. The article on Scroll went one step ahead and raised doubts on the surgical strike itself by terming it as the “so-called surgical strike”. Hardly shocking considering the type of agenda driven journalism both the portals thrive on.