No Result
View All Result
Newswire
Guha lashes out Ganguly, superstar culture in Indian cricket 20 mins ago
Regions of brain where serotonin promotes patience identified 26 mins ago
RJD may field its candidate for Bihar Rajya Sabha bypolls 29 mins ago
Yami Gautam seeks divine blessings on her birthday 29 mins ago
When PM gushed over his painting by a Parbhani student 35 mins ago
Market’s bull run may stay, ‘too strong’ derivatives data a concern 41 mins ago
Next
Prev

On Anand Ranganathan’s birthday, the news came that his best friend Abhijit Iyer Mitra who has been in prison for making a joke on Twitter finally seems to have got some relief and is likely to be released soon. The development took place yesterday after Anand asked Dr. Subramanian Swamy to intervene in the matter. Anand took a stand for him ever since he was imprisoned.

According to reports, Abhijit had been suffering from stomach pain and had been admitted to the surgery ward. He was taken for a medical checkup on Friday after having complained of severe mental trauma and stress. He later returned to the jail but his condition worsened further and authorities had to shift him to the hospital. It was also reported that he has lost about 10 kg weight in the last one month.

Two FIRs were lodged against Abhijit in Puri and Khurda districts under different IPC sections. Earlier, he was arrested by the Odisha police on September 20th in Delhi. Bail was granted to him on October 5 by a trial court subsequently, after he promised to cooperate in the investigation. On October 4th, he tried for the further extension of his bail in the Supreme Court but the plea was dismissed.

Afterwards, Abhijit Mitra wrote a letter to the state government to consider withholding sanctions to prosecute him in certain criminal cases. On this remark, Odisha Govt. accepted his apology letter. Yesterday, Home Department of Government of Odisha made a press release and said, “Taking into account his representation, the Government has decided not to accord sanction of prosecution in cases where prosecution has been sought for and also decided to take steps to withdraw other cases pending against him by following laid procedures”. 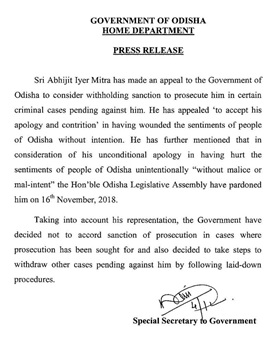 All cases to be withdrawn.

All cases to be withdrawn.

Despite this relief, the entire story is very sad. How can the state arrest him and treat him shabbily for almost 40 days only because of a joke? This reflects very poorly on the state government. Mitra was taken into judicial custody by Odisha police for making a joke on the Konark sun temple. Abhijit Mitra was treated badly in prison and his health deteriorated ever since then. Abhijit was hospitalized at the end, and perhaps that is what prompted them to release him.

Abhijit’s incarceration was widely criticized by media persons, politicians and human rights organizations as he was booked and jailed despite having apologized for the joke he made. The Odisha government allegedly used him to settle political scores with former BJD MP Bijayant Panda. According to several sources, the Odisha police wanted Abhijit to falsely implicate former MP Jay Panda for flying his chopper in an illegal zone. Jay Panda and Naveen Patnaik have been at loggerheads over the last few months. Many believe that Odisha Police hounded Abhijit because he refused to falsely implicate Panda.

Rattled by the resolve of Modi government, Vijay Mallya offers to pay it all