This is what Modi government has done for the Middle class

In 2014, when BJP registered a sweeping victory, one that was so historical, that it reduced the Indian National Congress to a mere 44 seats. It was not just a plain sentiment of anti-incumbency among the electorate that brought the UPA government down on its knees. It was a ferocious nationalist reprisal against the system, one that was fueled by exasperation and exhaustion with tremendous levels of corruption in the government, its minority appeasement, petty politics and alienation of the majority and a severe case of policy paralysis had struck a government that lacked vision and credibility. Back then, if there was one class that united best against the incumbent, it was the middle class.

A large part of the middle class in India rooted for Prime Minister Narendra Modi, and has stood with him under his leadership, through thick and thin, but some in this lot are in doubts and have come to ask, “what about us?” Although with no specific or urgent demand, the discontent among the middle class is soaring, and it seems to be fueled by a sense of alienation that sprouts from the government’s focus on socialist schemes for the poor and the farmers, and the burden of willful defaulters and non-performing assets on PSBs which is draining the exchequer. While these problems are uncontrollable, this contagious rationale has gripped a good many.

However, contrary to this escalating rationale, facts and figures show that the middle class in India are actually much better off now than they ever were. Comparing the latest data with that of 2013-14, reveals how the government has eased life for the middle class.

THE POSITIVE EFFECTS OF GST ON THE AVERAGE TAX-PAYER

The rolling out of the GST in June 2017, and the subsequent implementation took place rather smoothly and the economy recovered faster than expected. The central and state taxes were amalgamated to be brought under one umbrella. The problem of tax on tax (cascade taxation) was also solved with the implementation of the Goods and Services Tax. The number of direct tax payers has increased from 6 million to 10.6 million in FY 2017-18 pointing at a positive spillover effect of GST.

According to research based on consumer expenditure data, a household would be saving Rs 320 every month on their monthly spend of Rs 8,400 on 10 goods- cereals, edible oil, sugar, chocolates, namkeen and sweets, cosmetics and toiletries, washing powder, tiles, furniture and coir products and other household products. Earlier, tax in the monthly expenses of 8,400 rupees on daily-use items was 830 rupees while in the post-GST era, it has been reduced to 510 rupees thus saving almost 320 rupees for the consumer. This week itself, PM Narendra Modi announced that the government shall ensure that 99% of goods will be brought under the 18% GST slab or lower, leaving only luxury & sin items in the 28% tax slab.

Not only for the middle class but also rural populations, two insurance schemes launched by the center are nobly affordable and convenient. PMSBY provides for an accident insurance cover of up to 200,000 rupees at an annual premium of only 12 rupees. PMJJBY, a life insurance scheme with a cover of 200,000 rupees is available at an annual premium of only 330 rupees, less than 1 rupee per day.

REDUCTION IN INTEREST RATES AND EMIs 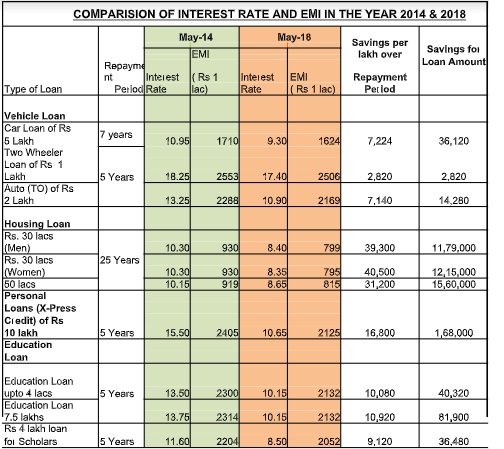 Consumer Inflation in the last four years has remained stable and within the 3 to 5 per cent target. In the period Oct 2018-March 2019 inflation has been marked at 2.7 per cent amid lower food and fuel prices. Inflation Rate in India averaged 6.37 percent from 2012 until 2018, reaching an all time high of 12.17 percent in November of 2013 and a record low of 1.54 percent in June of 2017. Double digit inflation had choked the middle class and the poor in the UPA-2 era and prices of food and fuel had spiralled uncontrollably. Relative to that gross instability, inflation rates in the last four years have been historically ideal for the consumer, even as India’s economy sustains a GDP growth rate of 7.1 per cent, remaining fastest in the world.

The middle class has benefitted, in more ways than can be summarized in one go, while also keeping up with some mammoth reforms like demonetisation and GST. The well being of the poor as well the health of the economy and its PSUs is paramount to the nation’s progress and it can well be credited to the honest tax payers, but unlike tax brackets, progress may not always be consistent and can only be made possible with shrewd, performance-oriented governments that have a far-sighted vision for the country.

From Unacademy to Byju’s, the unbelievable rise of Indian EdTech start-ups in less than a decade

‘Just 15 crore of us are heavy on 100 crore of them,’ AIMIM leader Waris Pathan proves anti-CAA protests are just a show of Muslim ‘power’