Newswire
New Supreme Court ruling on abortion ‘possible’: Trump 43 mins ago
Armenia, Azerbaijan erupt into fight over disputed region 3 hours ago
What we saw from Tewatia in nets is what we saw in Cottrell’s over: Smith 4 hours ago
Investment experts project positive turnaround for ITC stock 4 hours ago
India is Bangladesh’s loyal friend, closest neighbour: Abdul Hamid 5 hours ago
Samson and Tewatia steal the show in grand style 5 hours ago
Next
Prev

by Economic Gyani
in Economy

In a recent article published by The Indian Express, a very senior academic raised legitimate questions on India’s Growth Story. The essence of the article was that India got a favourable oil price bounty which could have been utilized effectively by bringing about land and labor reforms. The article believes that such reforms would have furthered the growth prospectus of Indian Economy and while the argument presented on the reforms is correct, however it conveniently ignores significant reforms such as the GST and Insolvency and Bankruptcy Code undertaken by the current government. Beyond this, it also ignores the fact that India did try to initiate a modern Land Acquisition Bill however stiff opposition made the government reconsider the bill for the time being.

On the reforms front, though I agree that there is an urgent need to bring about reforms in factor markets to further strengthen India’s growth prospects, however 5, years is too small a timespan to undertake many such big bang reforms. As is the case, GST and Insolvency and Bankruptcy Code within their right are big ticket reforms and I can’t imagine a government that has shown the willpower to undertake many such big-ticket reforms within a short span of 5 years. Besides, such reforms in factor market require an extensive process of discussion, deliberation and consultation which is why perhaps such reforms are more of a political decision rather than economic one.

So now the question that does arise is what is the health of the Indian Economy as of today and is it a lost opportunity? The answer to this question is much simpler than what most people would imagine. The Indian Economy has just entered into a positive economic cycle and what this entails is that somehow the growth India has experienced over the last couple of years is stable, robust and it is backed up with strong macroeconomic fundamentals. A case in point is that despite demonetization and GST, the economy witnessed only a minor dip in the growth during the transitionary phase. Now that the economy has well absorbed the impact of these reforms, growth is only going to accelerate going further.

The reason why the government is concerned about the liquidity and credit situation is largely driven by the fact that the economy has just started to enter into the positive investment cycle and this implies that firms are going to need funds to facilitate their fresh investments for further increase in output. Thus, it is imperative that there is adequate credit availability to facilitate the growth going forward. This does not understate India’s current growth story, but it proves at the point that for the first time since 2011, India’s witnessing an improved capacity utilization along with an increase in private investment as a percentage of GDP. As of November 2018, the private capital formation (investment) as a percentage of GDP is up to 32%. With low inflation and very high real interest rates it is important to contemplate the efficacy of RBI’s Monetary Policy decisions. It has been argued that the RBI has too tight a monetary policy and with simultaneous RBI’s stringent PCA norms this is significantly curtailing the availability of credit for private investment. Thus, there is absolutely no doubt that the economy does need some injection of the liquidity and that there is a case for a neutral stance rather than the current stance of RBI of calibrated tightening. Now that the private investment cycle is back on track, the government is keen to facilitate it by providing credit and create an enabling environment for private sector growth and it is working with the RBI to resolve liquidity issues so that the India’s growth can be accelerated further. 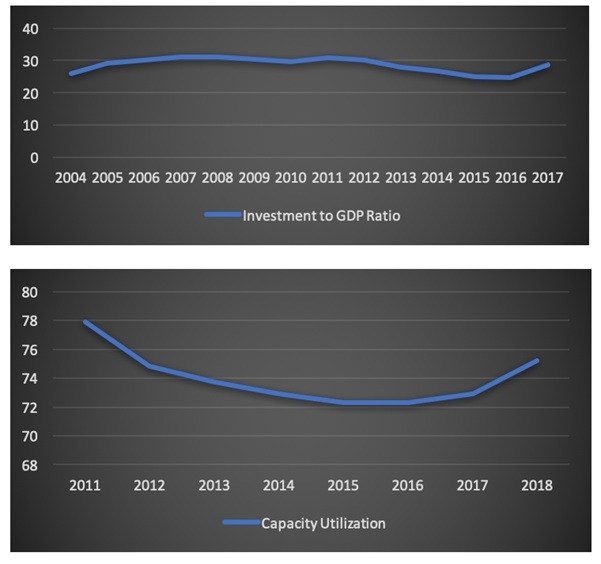 Strong changes in the economy due to improved Ease of Doing Business and facilitating a mode of exit or clean-up of debt-ridden funds by enacting the Insolvency and Bankruptcy Code are responsible for the revival of investment cycle in the economy. 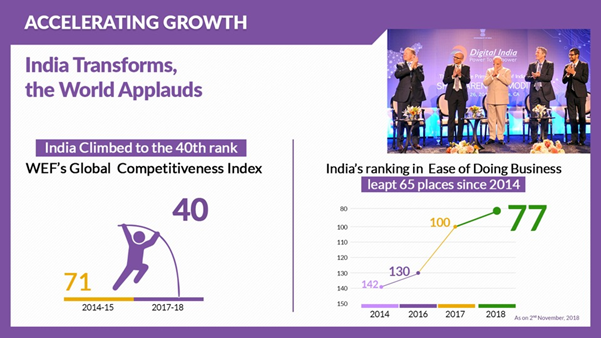 On the Export front, it has been the case that India experienced a very strong real exchange rate appreciation over the last couple of years which made India’s exports relatively less competitive and this has been a major reason behind the slow growth of our exports sector. While lately, the strengthening of the dollar did help the export sector however the current geopolitical climate is not very conducive for exports as the entire globe becomes protectionist. In the long run, India’s improvement in World Economic Forum’s Competitiveness Index will help improve India’s exports and thus one should not take a myopic view of the Indian Economy.

On the Oil front, there has been a criticism that the government did not pass on the benefits of the fall in International Oil Prices to consumers. This criticism ignores the fact that there are no free lunches and that the previous strategy of UPA-2 to keep the petrol prices fixed led to gross mismanagement of macroeconomic fundamentals. That ways, the strategy to ensure that some amount of this bounty was used to shore up revenues to bridge the deficit of the Central Government has ensured that the state has adequate capacity to undertake investments in public infrastructure. As is the case, there has been moderation of crude oil prices from October onwards, so the retail prices have also moderated thus it would be too soon to say that the Oil Party is over!

While there is still scope for further economic reforms, however reforms are a continuous and never-ending process. However, due credit must be given to the government as over the last couple of years, it has renewed the focus towards sound economic policy making and it has demonstrated the much-needed political will to undertake both several small procedural reforms along with the much-needed big ticket reforms.

Is Congress undermining Sachin Pilot ahead of the crucial Rajasthan election?

India signs yet another currency swap agreement, this time with UAE

Better than the Page 3 economist near you!