by Krishna Kumar Rai
in Analysis

The menace of ‘fake propaganda’ especially on RSS has grown exponentially on social media as it has become the soft target for sponsored fake news. One such news came from Bihar in the month of August this year where a woman was brutally beaten up and paraded naked in the streets, RSS was made the culprit behind this incident.

But a local court now has sentenced 5 people including RJD leader Kishori Yadav to 7 years of imprisonment whereas, 14 others have been sentenced to 2 years of jail.

The incident is of Bihiya, district Bhojpur where a 19-year-old man Vimalesh Sah was first reported to be missing and then his body was found near the railway track. After villagers from Sah’s area came to know about this, they hurled to the spot and some of them assumed and suspected it to be work of those living in the red-light area near the railway track, behind the murder.

The villagers then went berserk, setting fire to a number of shops, creating ruckus and chaos and even beating up several residents in the area. A middle-aged woman was then subjected to the fury of the crowd as she was beaten up, her clothes were ripped off and she was paraded naked in the whole street. The mob went so mad that they started hurling stones at a train passing through the area.

The video of the whole incident was then making rounds on social media added to which there was a description, “This happened in Bihar, RSS youths doing it to a Dalit Christian women. Share widely till it reaches the human rights commission, women’s rights movements because the government will not protect our women.”

This was clearly being done to give the whole incident a communal and political angle. The Rashtriya Swayamsevak Sangh (RSS) was falsely accused behind this heinous incident. A day after this incident police arrested 15 people and 300 were accused of being part of the whole incident, 2 police officers and 6 other policemen were also suspended for not being able to handle the situation.

Total 15 people arrested in connection with the incident where a man was found dead in Bhojpur's Bihiya & a woman was allegedly stripped & thrashed on suspicion of being involved in the murder yesterday. #Bihar

Tejashwi Yadav seemed to gain political mileage out of this as he took t twitter and wrote,,
“In Bihar, a woman is allegedly stripped, thrashed & paraded naked by a mob in a lawless state.
I’m speechless & numb to see the heart-wrenching videos of that women. Nitish Ji, With folded hands, I request you to fix the law and order & ensure women safety & security. Pls” 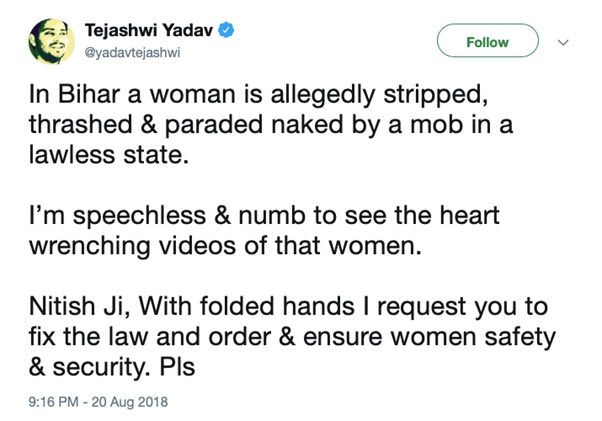 Now, after the local court has convicted Kishore Lal Yadav, an RJD leader behind this will the party and Tejashwi Yadav apologise for spreading the fake news amongst the people?
Tejashwi who talked about lawlessness his own party members resorted to burning down the houses of 15 Dalit families in Malikpur village in Raghopur. Raghopur is in Vaishali district of Bihar and is also the constituency of Tejashwi Yadav.

This is not the first time that RSS had to face the wrath of fake news, just a month ago, there came a  News of a woman caught on fire.  There were voices being heard in the video that, “In an event of RSS, their women cadre in their protest tried burning the Burkha and these women were punished, as Illahi’s havoc broke upon them”.

In a bid to find out the reality AAJ TAK took up the matter and found that the video which quickly became the talk of the town, didn’t have any link whatsoever with the Sangh.

In the end, it is necessary that people realize that some political parties sponsor the fake propaganda. It’s only when the people are aware, can they differentiate between the politically sponsored fake viral videos and actual news.

Nepal wants Dehradun and Nainital from India. It is shocking that they haven’t claimed Delhi and Mumbai yet

Lesson from ByteDance: Xi Jinping now wants firmer control over Chinese private firms so that they do not get sold

‘If he were alive, he would be behind bars,’ Taapsee Pannu and Anurag Kashyap take the lead in slandering Sushant’s image