Twitter CEO- Jack Dorsey- teaches India about social-justice in the form of hate-mongering and demonizing Brahmins but has done nothing substantial to address diversity issues in his own company. In May, Twitter in its diversity data concluded that its workforce was more diverse in 2017. However, a lot of questions have been raised on the way Twitter measures diversity.

According to a recode report, 12.5 percent underrepresented minorities also includes employees who refused to identify their ethnicity on Twitter’s internal survey. This group constitutes 2.9 per cent of Twitter’s workforce and is being placed under the category of “underrepresented minorities” despite the fact that this contingent specifically refused to identify their ethnicity. There is no way to know about to what ethnicity they belongs to.

The recode report says that if one subtracts that group from Twitter’s list of “underrepresented minorities,” then the percentage of non-white and non-Asian employees’ at Twitter falls to a mere 9.6 percent, which is a decline from 11 percent in 2016.

So Twitter’s claim that they were more diverse in last year seems dubious. 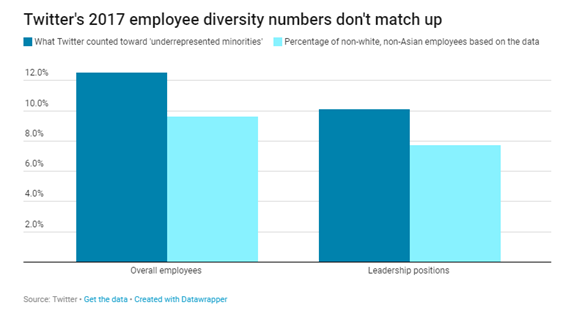 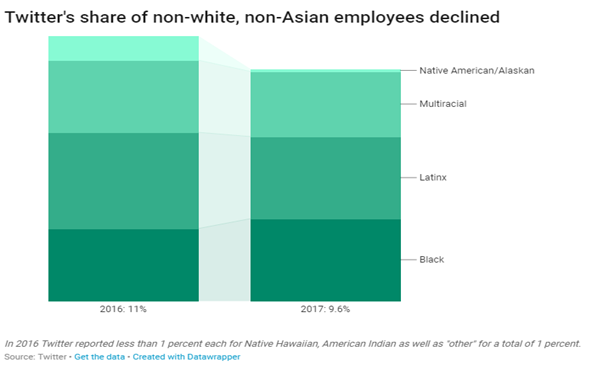 After Recode approached Twitter with their findings, Twitter issued following statement: “As has been done in years past, the chart with the URM data included all employees who did not self identify as White or Asian. This includes employees who declined to self-identify in our systems. The race/ethnicity breakdown is a more granular and transparent one and more reflective of the data we’ll report moving forward. To eliminate any confusion and in the interest of transparency, we’ve removed the URM chart from our diversity report.”

Twitter’s ambiguous statement looks like an attempt to save them from embarrassment.  They further came up with a long statement to cover up the damage but it ended increasing their troubles. In their updated statement, a Twitter spokesperson said, “We released our diversity report this morning which included a graph that caused some confusion. We want to apologize and clarify.”

“The race/ethnicity breakdown in the report is more accurate and granular than URM which we had already decided to move away from. Our new goals put specific focus on increasing overall women, black, and latinx representation at Twitter, and we’re holding ourselves accountable.”

Twitter also said that the data on its 2016 report was rounded and not as precise. It said that in 2016 survey also employees were allowed to refuse to identify their ethnicity and as a result they were put in “underrepresented minorities” group, which according to twitter constituted 11 percent of its total workforce strength in 2016.

But Recode in its finding came to know that percentage of employee who refused to identify their ethnicity was less than 1 percent in 2016, a much smaller group as compared to year 2017. So, it means that total percentage of underrepresented minorities was around 10 percent at Twitter which is still higher than the 9.6 percent of employees who fell into the same category in 2017. So, the overall conclusion is that Twitter is not as diverse as it claims to be.

The recode in its report claimed, the Twitter reported 3,372 full-time employees as of December, according to regulatory filings, but that figure includes Twitter’s global workforce. The internal diversity survey only looked at underrepresented minorities that are part of Twitter’s U.S. workforce. 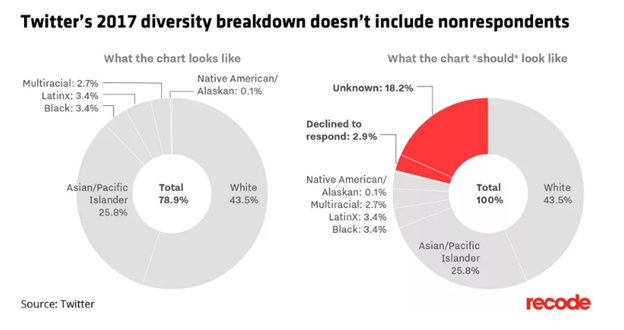 According to multiple media reports, the diversity level in Twitter is not only alarmingly low but twitter also tried to misrepresent data on the issue. So before indulging in hate-mongering, Jack should probably take a closer look at his own house.

Congress leader claims that only Congress can build the Ram Temple